One of the most phenomenal scientists of the early 20th Century. He found amazing uses for the peanut, sweet potato and soy bean that continue to enrich our lives. And against racial obstacles, his achievements paved the way for generations of young African American scientists 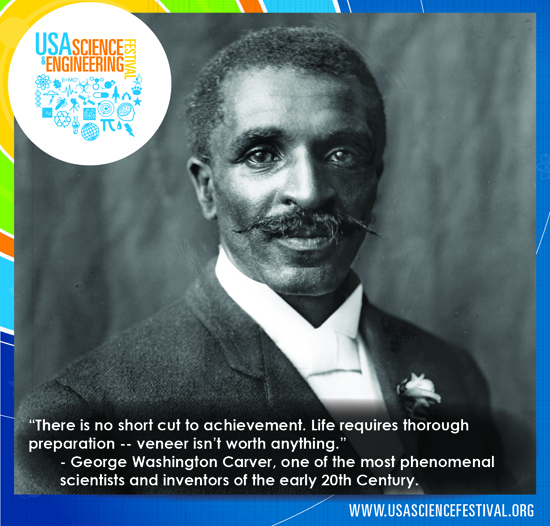 The ultimate agricultural botanist and chemist, George Washington Carver, from his early years, was known for his curiosity and his "burning zeal to know everything", especially about nature. He soon became fascinated with how to use botany and other sciences to create products that would benefit the economic and agricultural productivity of poor black farmers– a goal that would ultimately set him on a path to make history as the scientist who created so many products that continue to benefit the world.

Born in 1864 to Mary and Giles, a slave couple, near Diamond, Missouri, George (with his mother and sister) was kidnapped by raiders from Arkansas, but was rescued by his master Moses Carver, who traded a horse to the raiders in exchange for the infant George's release. After the end of the American Civil War in 1865, Moses Carver and his wife took care of George and his brother James, like their own.

George became interested in practical botany and gardening at a very early age. He used to spend hours tending to the Carvers' garden, and developed a reputation as a 'plant doctor' in Diamond Grove. Speaking about his love for nature, he later said, "If you love it enough, anything will talk to you."

He went through a trying childhood, since very few schools and colleges at the time accepted black students. George was once accepted in a college on the back of his excellent grades, but was refused admission when the college administration came to know about his race. He earned his diploma at Minneapolis High School, and would later complete college training in botany in Iowa.

Why He's Important: Through his tireless research, most of it conducted as a scientist and teacher at the all-black Tuskegee Institute in Alabama, George discovered 118 products from the sweet potato, 75 products from pecans, and over 350 uses for peanuts, including cosmetics, dyes, paints, soaps, rubber, plastics, gasoline, and nitroglycerin.

Through his inventions, he was instrumental in creating new markets for farmers. In addition, the crop rotation methods formulated by him are considered by some historians as his most significant achievement because they saved the Southern lands from becoming barren, benefiting both black and white farmers. The 19th century American economy was primarily agrarian, and much depended on the unhindered production of cotton.

Other Achievements: George was hired in 1896 by Booker T. Washington ( the famous black educator and leader who founded the Tuskegee Institute) as a faculty member and researcher in Tuskegee's Agricultural Department. George reinvigorated the fledgling Institute, and carried on his research there for the next 47 years, becoming a role model for countless young black students. (In accepting the position at Tuskegee, it is said that Carver turned down an invitation from inventor Thomas Edison to come work for him.)

Carver's expertise was also sought by such luminaries of the day as President Teddy Roosevelt (who admired his work and sought his advice on agricultural matters in the United States), Indian leader Mahatma Gandhi (whom Carver advised on agriculture and nutrition) and Henry Ford (with whom he collaborated with on developing alternative fuel from soybeans for the automobile and rubber from various plants).

He is the recipient of numerous honors, including a national monument erected in 1943 in Diamond, Missouri—the site of the plantation where he lived as a child – in his honor. This was the first national monument dedicated to an African-American. In 2005, the Missouri Botanical Garden in St. Louis opened the George Washington Carver garden, which includes a life-size statue of the garden's famous namesake.

Education: He earned his Bachelor's and Master's degrees in Botany from Iowa State University School of Agriculture.

In His Own Words: In explaining why, despite his many famous inventions, he only accepted patents for just three of his products, he said his ideas and inventions were a gift from God. "God gave [the ideas] to me. How can I sell them to someone else?" he explained.

Carver died on January 5, 1943. He had donated his entire life savings -- $60,000 (more than one million dollars in 2012 terms) -- to the Carver Museum and the George Washington Carver Foundation at Tuskegee Institute.