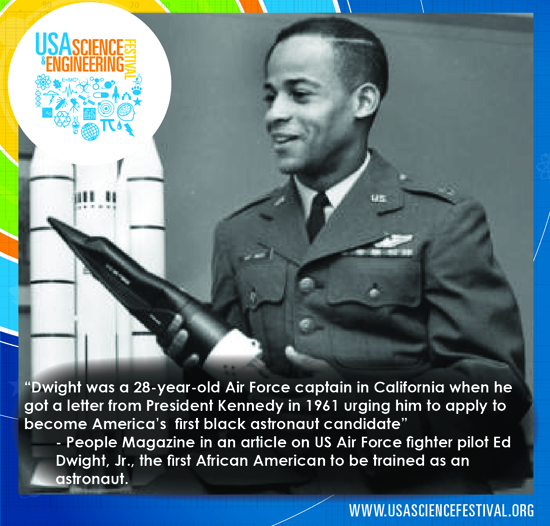 Chosen in 1962 by President Kennedy as America's first black astronaut candidate; due to racism in the astronaut program, he resigned; now is a world-class sculptor, specializing in sculptures depicting aspects of Black History

Ed Dwight, Jr. was a 28-year-old Air Force captain at Travis Air Force Base in California when he got a letter from President Kennedy in 1961 urging him to apply to test-pilot school as a prelude to becoming America's first black astronaut. The son of a Negro League baseball player, Ed had been a B-57 pilot for two years, had flown more than 2,000 hours in high-performance fighter jets and had an aeronautical engineering degree from Arizona State.

To put it mildly, flying was in his blood, and the prospect of becoming the first African American in space was a dream come true – but this dream would be cut short.

Born on the outskirts of Kansas City, Kansas in 1933, Ed was the son of Ed Dwight, Sr. who played second base for the Kansas City Monarchs in baseball's Negro League. Child rearing fell primarily on Ed's Catholic mother, Georgia Baker Dwight, who convinced her son that he could accomplish almost anything. Ed grew up as an avid reader and a talented artist who was mechanically gifted and enjoyed working with his hands.

Why He's Important: In an era of severe discrimination in the U.S. military (especially in aviation and aerospace pursuits), Ed Dwight made history by becoming the first black to be selected for astronaut training. And although he never did fly in space (Guion Bluford in 1983 would become the first black astronaut to do this), Ed's accomplishments – including his perseverance and bravery against racism in the early days of the space program -- make him a hero.

These accomplishments are why he was recently honored by the National Society of Black Engineers' (NSBE) Space Systems Special Interest Group at its Celestial Torch Awards Banquet in Los Angeles. (The Celestial Torch Awards is the only recognition program created specifically to recognize African American excellence in aerospace technical disciplines).

Ed joined the United States Air Force in 1953, pursuing his dream of flying jet aircraft. He became a USAF test pilot, and in 1961 earned a degree in Aeronautical Engineering from Arizona State University. At the suggestion of the National Urban League's Whitney M. Young, Jr., the Kennedy administration chose Captain Ed Dwight as the first Negro astronaut trainee in 1962. Catapulted to instant fame, he was featured on the cover of Ebony, Jet, Sepia and in news magazines around the world.

Dwight passed the first phase of experimental test-pilot training in April 1963. He was in the space-pilot phase when disaster struck: JFK was assassinated and Dwight was rejected for further NASA training a few months later, in spite of calls to NASA from Robert Kennedy.

His race may have provided an entrée via President Kennedy's help, but Dwight feels it also worked against him, fueling racial overtones from others in the astronaut program. "The Air Force and NASA felt someone was trying to cram a [black man] down their throats," Ed said later. In an autobiography, Col. Chuck Yeager (Ed's supervisor in the program) essentially confirms Dwight's view. He writes that, as head of the aerospace pilot program in which Dwight was training, "I was caught in a buzz saw of controversy. The White House, Congress and civil rights groups came at me with meat cleavers.... [I was told] 'Get that colored guy in.'

Soon after Kennedy's death, Ed was sent to Germany to work as a liaison for a non-existent German test pilot school. He was later court marshaled after refusing to fly his plane when he had heard that it was made unsafe – purposely.

Due to this threatening atmosphere, he resigned in 1966, never having gone into space. Ed chronicles those days in his 2009 autobiography, Soaring On The Wings Of A Dream: The Untold Story of America's First Black Astronaut Candidate.

Later Achievements: After leaving the military with an honorable discharge, Ed took a job at the IBM Corporation as a Marketing Representative & Systems Engineer. After leaving IBM, he became an aviation consultant in Dallas, TX and later started a restaurant chain. He then focused his attention on Dwight Development Associates, Inc., a real estate land development and construction company.

In 1977, he earned his Master of Fine Arts from the University of Denver, which greatly enhanced his vision for his current career: that of a world-class sculptor. Ed has sculpted great works depicting aspects of African American history, including the Black Frontier in the American West; International Monuments to the Underground Railroad in Detroit, Michigan and Windsor, Ontario; a Dr. Martin Luther King Memorial in Denver's City Park; a bust of George Washington Williams in the Ohio State Capitol in Columbus, Ohio; the Black Patriots Memorial on the mall in Washington, D.C.; the South Carolina Black History Memorial in Columbia, South Carolina; and the Alex Haley-Kunta Kinte Memorial in Annapolis, Maryland.

His Quincy Jones Sculpture Park in Chicago brings his total major works to 35, some of which are on permanent display at the Smithsonian Institute. In addition, his "Jazz: An American Art Form" collection is renowned and includes over 70 bronzed sculptures such as Duke Ellington, Miles Davis, Charlie Parker and Ella Fitzgerald