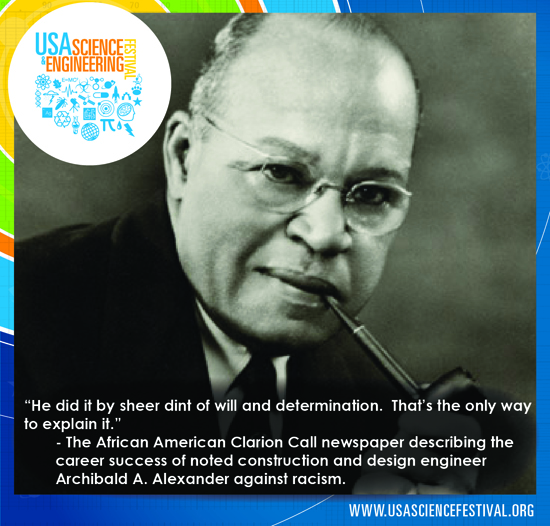 Growing up in Iowa during the late 1880s, Archibald "Archie" Alexander remembers being warned that engineering was not something he could expect to succeed in as a black man. But he pushed forward anyway, later graduating in 1912 with a bachelor's degree in engineering from the State University of Iowa (now the University of Iowa), becoming the first African American in the school's history to do so. Such perseverance would be a hallmark of Archie's life and career.

He was born in Ottumwa, Iowa, the son of Price and Mary Alexander. When the family moved to a farm outside Des Moines, his father became head custodian at the Des Moines National Bank, which at the time was a prestigious job for a black man Attending Oak Park Grammar School, Oak Park High School and Highland Park College for one year, Archie began his engineering education at the State University of Iowa.

Although he initially went to Des Moines College and attempted to join the white-only team there, he was declined. As a result, he played tackle from 1910 to 1912 at Iowa and was nicknamed "Alexander the Great" During the summer he worked as a draftsman for Marsh Engineers, a Des Moines bridge-designing firm.

After university graduation, Archie served as a foreman for a bridge-building company before going into business for himself in 1917. Continuing his education at the University of London, Alexander studied bridge design in and obtained a degree in civil engineering in 1925 from the State University of Iowa.

Three years later, he was joined in his business by George Higbee, a white colleague from Marsh Engineering. Together, they made their company thrive by specializing in building bridges, viaducts and sewerage systems throughout Iowa until Higbee's accidental death in 1925. Archie continued on his own for four years landing substantial contracts before going into another partnership. In the partnerships, Archie was the outside man engaged in landing contracts and fostering good public relations while his partners attended to the administrative details of running the business. His expertise as both an engineer and a marketer helped to overcome any existing color barriers there were.

Why He's Important: Through his company, Archie Alexander spearheaded more than 300 major projects in design and construction engineering including: theTidal Basin Bridge and seawall in Washington DC; Washington DC's Whitehurst Freeway; the heating plant and power station at the University of Iowa; an airfield in Tuskegee, Alabama; a 52-acre sewage treatment plan in Grand Rapids Michigan, and a powerhouse in Columbus, Nebraska.

Other Achievements: In 1934, he was appointed as one of a 12-member commission to investigate the social and economic conditions in Haiti. In 1946, he was awarded an honorary Doctor of Engineering by Howard University.
In 1954, Archie was appointed Governor of the United States Virgin Islands by President Dwight D. Eisenhower. He was the first Republican governor there since the establishment of the civil government.

He died in 1958 in Iowa. The Archie Alphonse Alexander Papers are held at the University of Iowa Special Collections & University Archives.