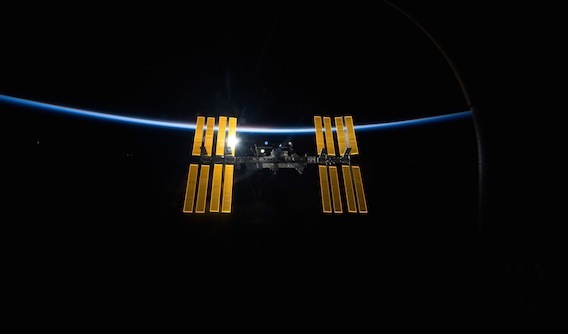 How many people are living in space right now? I've found that since the end of the Space Shuttle program, most Americans think the answer is zero, but it's not. There are currently six people living aboard the International Space Station, including two Americans (Steve Swanson and Rick Mastracchio), one Japanese citizen (Koichi Wakata), and three Russian cosmonauts. All the astronauts currently get rides to and from the station on Russian rockets, but it's still an international outpost. There's lots of great science going on there, involving not only professional scientists but tens of thousands of students who have participated in the Student Spaceflight Experiments Program. And now there's another way for kids, parents, and teachers to be a part of the human adventure of space exploration: Story Time From Space. Story Time From Space is a program designed to combine literacy and STEM (science, technology, engineering, and mathematics) education. The basic program plan is to send children's books and related science demonstrations up to the International Space Station, where astronauts film themselves reading the books and conducting the demos. The edited videos are then posted on the Web, along with suggested activities (for kids, teachers, and families) and curriculum materials that can be used in the classroom. Thousands of teachers have already signed on to make use of the Story Time From Space program, and because it will be freely available on the Web, it has the potential to reach tens of millions of children around the world.I have the good fortune of being involved with the Story Time From Space program, thanks to the fact that program founders Patricia Tribe (a long-time director of education at Space Center Houston) and astronaut Alvin Drew chose my children's books as the first set to send to the International Space Station. The books launched in January and continue to orbit overhead every 90 minutes, at a speed of some 17,000 miles per hour. They've already been read in English by the astronauts, though the editing of the videos is not yet complete. Plans are also in the works for astronaut Wakata to read in Japanese (we've sent up electronic files with translations), and possibly for the cosmonauts to read in Russian as well. (That's easy in principle, but it's complicated by current politics.) The first set of science demos, designed by physicist and veteran astronaut Bjarni Tryggvason, will be launched later this year.

The five books currently orbiting Earth aboard the International Space Station.
Here's a brief bit of text and a video introducing the program:

Imagine astronauts on the International Space Station reading stories to the children of Earth as the world rotates below.

Imagine videos of the readings accessible via the web to everyone in the world, along with additional videos of educational science demonstrations conducted in weightlessness, all accompanied by lesson plans and classroom activities that teachers or families can use.

Imagine a community of educators, scientists, and artists all working together to make this dream a reality...

Now, imagine no more... it's Story Time from Space!

And now for the important part: how you can get involved. There are many ways, but here are a few suggestions:

I believe that for any form of education to be successful, we need to focus simultaneously on three things: education, perspective, and inspiration. The education part is the specific content that we want students to learn, but if we present this alone, students won't see the value in learning it. To make it meaningful, the education part must be accompanied by the perspective and inspiration parts. The perspective part should show them how what they are learning will help them gain perspective on their own lives and our place in the universe. The inspiration part should make them care about what they learn, ideally in a way that makes them dream of how much better the world could be if they get an education and become part of the solution for the future. Story Time From Space encapsulates this education-perspective-inspiration approach better than any other education program I've ever seen. I hope you'll become a part of it.

Disclosure: While I am now part of the team supporting Story Time From Space, I do not receive any compensation from this program. I support it because I'm honored to have had my books selected by the program, and because I so strongly believe in its goals. Please visit storytimefromspace.com and show your support for the program.

Explorers in Our Midst: What the James Cameron Voyage Can Tell Us

By Larry Bock Founder and organizer, USA Science & Engineering Festival In our world of high-tech bravado, I often wonder where we'd be without explorers -- those undaunted heroes and heroines of the past and of today whose achievements, like an unforgettable song or movie -- form a lasting…

Robots vs. Humans: Should we cede solar system exploration to the robots? Do humans have a place beyond low Earth orbit?

By Dr. Cynthia Phillips Planetary geologist at the Carl Sagan Center for the Study of Life in the Universe, SETI Institute The final mission of Space Shuttle Atlantis has spawned a whole series of perspective pieces on the history, state, and future of space exploration. Some, like the YouTube…

I'm not a nerd, just a follower!

Five Coolest Moments in the History of the Shuttle Program

As NASA's Space Shuttle program winds down -- Endeavour's final mission is slated for later this year, then that's it -- let us take a moment and remember the Shuttles. Sure, they had a tendency to explode into balls of fire. Sure, they were expensive, risky, and besieged by problems. But now is…
Advertisment