The Smithsonian's Kirk Johnson: Living Out a Childhood Love For Natural History and Its Museums 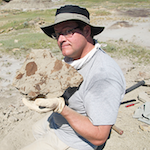 "Natural history museums are incredible places where people have the opportunity to interact with scientists, scientific discovery and to experience the wonders of the world," says Kirk Johnson, the Sant Director of the world-renowned Smithsonian National Museum of Natural History, and whose noted career as a paleontologist has seen him lead expeditions (including the famous Snowmastodon Project) which resulted in the discovery of more than 1,400 fossil sites on all continents.

But long before embarking on his work as a leading scientist, educator and administrator in natural history, his passion for this field and its museums was sparked in childhood when he began collecting arrowheads and fossil shells on summer trips with his parents to California and Wyoming. At age 12, he was further inspired when a paleobiology curator at the Burke Museum of Natural History and Culture in Seattle encouraged him to write letters to scientists, asking them questions about fossils.

Kirk did not decide to become a scientist until he was in college. "Up until that point in time, I hadn't really realized that corresponding with scientists, finding things, and working in a natural history museum—that was really science," he recalls with a smile. "Once you see what science is, then there's no stopping you. If you have curiosity, if you keep your childhood curiosity, then every day is amazing."

His current research focuses on fossil plants, the extinction of the dinosaurs, and methods for dating rocks and fossils. He is known for his scientific books and articles, popular books, museum exhibits, presentations, and collaborations with artists. In 2010-11, he led the Snowmastodon Project, the excavation of an amazing ice age site near Snowmass Village, Colorado. This dig was featured in the NOVA documentary, Ice Age Death Trap, and in Johnson's book, Digging Snowmastodon, Discovering an Ice Age World in the Colorado Rockies.

Today as director of the Smithsonian National Museum of Natural History, he oversees more than 460 employees and a collection of more than 127 million objects—the largest collection at the Smithsonian. The Museum hosts more than 7 million visitors a year, and its scientists publish about 500 scientific research contributions a year.

Says Kirk: "As a scientist and a communicator, I am thrilled to have the opportunity to lead the nation's natural history museum into the 21st century."

Before assuming his post at the Smithsonian in 2012, he served as Chief Curator and Vice President of Research and Collections at the Denver Museum of Nature & Science where he led the completion of the museum's first comprehensive long-term collections and research plan, and became known for his skillful use of social media to enhance  public outreach and education.
In addition, he serves as the associate editor for Cretaceous Research. His professional memberships include the American Association of Museums, the Geological Society of America (fellow since 2002), the Botanical Society of America, the Paleontological Society and the International Organization of Palaeobotany.