I went to college in Connecticut. Deal with it.

Perhaps because it's college graduation and reunion time, L.V. Anderson at Slate has written a column entitled "People Still Say They 'Went to College in Boston,' Meaning Harvard? Please Stop Doing This." She claims that by giving such an evasive answer, one "buy[s] into the overblown mythos of Harvard and the presumption of Ivy League superiority." Or worse, it "functions as an elitist dog whistle," and that those who may "react inelegantly" upon hearing one went to Harvard/Yale/Princeton and others are "insecure people who perhaps have not yet learned that Ivy League schools confer degrees on plenty of idiots every year."

Here is why I usually say "Connecticut" or "New Haven" when I'm casually asked about college  by passing acquaintances: it's just so much fucking easier in almost all situations. Perhaps because Anderson lives in Brooklyn, and as she notes, works with colleagues who "have degrees from universities that rank highly on U.S. News and World Report’s annual list," she runs in circles with many of those who do understand that Ivy League schools confer degrees on plenty of idiots every year. Great for her. This is not universal.

Let me suggest that she spend some time in flyover country. Where I come from in rural Ohio, very few people give a shit about Yale, or Harvard, or MIT. At my high school, way more people aspired to attend universities in the Big Ten than in the Ivy League. I'd not even heard the term "safety school" until my first week at Yale, or realized that so many in my Yale class considered institutions like Wellesley and Swarthmore to be such. (To be honest, I'd never heard of those colleges, and didn't even know where Yale was precisely located until I applied. Somewhere out east was my best approximation). My alternate schools were both institutions in Ohio rather than the typical Ivy backups.

The Ivies just aren't on the radar for many of us outside of the coasts, even those who could be prime Ivy material. Even Yale acknowledges this, as I wrote before--calling students in these states "low-hanging fruit" and claiming that we are tough to find. Over the years, even though I've enjoyed attending reunions and keeping up with my classmates, I've felt increasingly distant from my alma mater. Anyone surprised that there's no "Yale Club of Cedar Rapids"?

So when I'm here  in "flyover country" and discussing college, I've found in my 20-year-experience as a student and alumna that to bring up Yale in many circles is to do just what Anderson is accusing those who say "Boston" or "New Haven" of doing: buying into the overblown mythos of Harvard and the presumption of Ivy League superiority. Really, what conceivable reason do I have to name-drop? To many here, Yale might as well be Mongolia--people travel there about as frequently, and understand it about as much. It's practically mythical, and those who've gone there may as well be unicorns when it comes to the frequency of encountering an Ivy alum in many areas. The Ivies are places of Romneys and Bushes and Kennedys, where people shit gold bricks and dress like this: 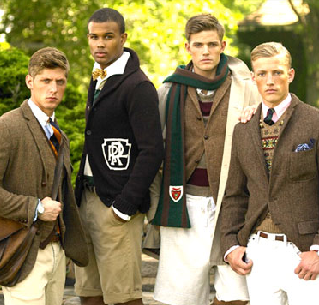 How Ivy Leaguers probably look on campus, to an average Midwesterner.

As such, it creates an artificial distance between myself and those I'm conversing with. I "other" myself by saying that I graduated from Yale. This might not be important in Anderson's line of work, coaxing other upper-middle-class foodies to "go ahead and eat the cookie dough,"  but when I'm out speaking with farmers and other community members in the rural Midwest,  or meeting with potential students coming to a state school, you can bet that my background from a farming area in Hancock County, Ohio is way more important and relevant than my four years spent at Yale.

As Anderson should know, some of these conversations come down to knowing your audience. In Brooklyn, or in workplaces that are Ivy-heavy, I may agree with her. Maybe they're really being faux-modest if they answer the inquiry about their college with "Boston" or "New Jersey." In my professional biography I put Yale, and certainly will say that to academic colleagues when the topic comes up. But she's flat-out wrong when she claims that "there is never any reason to answer the direct question 'Where did you go to college?' with an evasive half-truth." In many of my conversations, I just don't see the point in going into it, and in the past, it's made both people involved feel awkward. If this makes me a "patronizing, self-serious jerk," so be it. I'm the one who gets to claim my identity and own my biography, and I'm fine with being one who went to college in New Haven.

When I first went to graduate school, I told people my degree was from "The Universty". I soon realized that some did not undestand that I was speaking of the University of Texas.

Tara, you have identified an issue that has both puzzled me and seriously concerned me for several decades.

Firstly, if someone presents a reasonably sound inductive or deductive argument it matters not whether that someone is totally uneducated or Albert Einstein.

Secondly, those who obsess over where someone was educated demonstrate only the enquirer's stupidity. Asking when rather than where would be a slightly more logical obsession e.g. recently graduated school teenagers are very likely to have a more accurate knowledge of modern science than anyone who graduated from a prestigious university ten or more years ago.

I'm aware of the "appeal to authority" fallacy, but is there a name for the "appeal to Ivy League" and "appeal to locale" fallacies that you've quite rightly highlighted in your excellent post?

Michelle, exactly. It's only a "dog whistle" if you run around with others who do it. Most of us don't have anything near approaching that critical mass.

Pete, I mostly agree. There definitely is something to be said about a formal education though--sometimes you need more depth of understanding, which self-taught doesn't always give, even if you understand many of the issues at least superficially. That said, I definitely know many who are incredibly intelligent with no or minimal college. I'm also no philosopher so I don't know if there's a formal fallacy referring to this, or if that would just be a subclass of the argument to authority. (But just remember that's not a fallacy if someone actually has expertise that they're using!)

I grad-schooled "in Boston", and the first question is inevitably "How'd you get in?" The answer: "I applied". There is no mysterious special anything about these schools. They are just evidence that if you specialize in bringing in stronger than average students, provide resources, maintain a focus on education (rather than athletics), the results will be much better than par. I undergradded at a small school in the middle of no-where. Some very good things have been done by my classmates from there. Some of my rad school classmates have failed miserably at everything they have tried. I would guess that the primary attitude that I see, as do many of my friends, is the perception that there was some entitlement involved, which isn't always incorrect, but is most certainly not always right.

This is an elightening article. That's coming from someone who has tended to think of this along the same lines as Anderson. But can we agree that if the SECOND question is "But WHAT school?", the proper response is to name it?

Justin, sure. But usually the first answer suffices unless the other person has actually spent time on the east coast or something.

Those in the know want to know who your advisor was/is. Plenty of solid ones in flyover country. The rest is either polite r waddle or whistling. And maybe they want to know your team loyalties.

Yes. Can't agree with you more. Although it is true that not everyone who goes to an elite institution is extremely brilliant, most people aren't aware of that.

I'm from NW Ohio also and yeah, hardly anybody gave a rat's posterior about the Ivy League schools at application time as far as I recall. Most of my friends went to OSU, Michigan, Miami or BG.

BTW my mom is from a tiny town just to the east of Hancock Co--Wharton, in Wyandot Co. I've played at open mic nights at the Coffe Amici in Findlay, nice place.

Nice! I know Wharton--my HS played Riverdale in most sports. I know Coffe Amici but I usually go to George House when I'm in town.