Cobra Commander & Blowing Up the Moon!

This wonderful headline showed up in my Facebook feed: U.S. 'planned to blow up Moon' with nuke during Cold War era to show Soviets might. This was a bit eyebrow-raising. Dr. Strangelove was a slightly unfair caricature, but the Cold War really did have a better-than-average share of nuttiness. Still - blowing up the moon? Surely not.

And it was in fact surely not. The article itself says there was a never-pursued idea to detonate a nuke on the lunar surface. To an earthbound observer, it would have meant a bright, brief pinprick of light on the face of our celestial neighbor and not much else. It wouldn't have even left a naked-eye visible mark. (At the distance of the moon, the smallest features resolvable by the naked eye are more than 60 miles across).

To their credit, a lot of other news outlets jumped on this. Forbes and PC Magazine are a few of the ones on the top of Google News with more accurate takes on the issue. Forbes even gave a quite accurate estimate for the energy required. I myself did something similar on this blog a couple years back with a post on the physics of the Death Star*, with a derivation of the gravitational binding energy. Rather than go through that again, let's do a more handwaving but possibly more intuitive derivation of the energy required to blow up the moon. 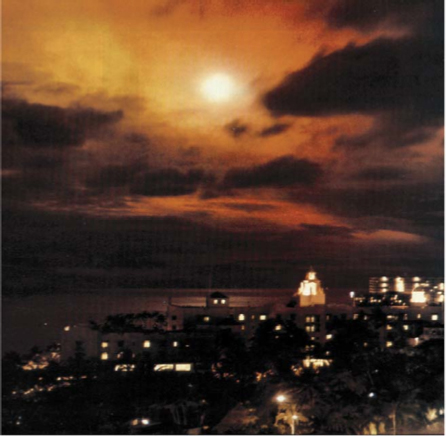 Starfish Prime, an actual US nuclear detonation in space.

Ok, imagine you're standing on the moon. You want to turn it into dust, spread diffusely throughout the solar system. In this thought experiment, you might imagine grabbing a handful of the lunar soil, take it into space, and letting it go at some very large distance from the moon. The energy required to do this is going to be related to the gravitational force the moon exerts on your handful of dirt. which according to Newton is proportional to the gravitational constant G and the product of their masses. After the first handful is gone, you come back to the moon and repeat the process. This time it's infinitesimally easier, because the gravitational pull of the moon is infinitesimally smaller, because it's less massive by the handful of dirt that's already gone. If you repeat this process a bazillion times until the moon is gone, you'll have spent an amount of energy that's proportional to the mass of the moon and the mass of all the handfuls (also the mass of the moon). So there's probably going to be a GM2 term in the equation.

Well, that's nice but it won't yet give us a number. We need to be able to put a number on the energy required per handful. We might imagine that if the moon were compressed into a much smaller and denser ball of the same mass, it would be harder to remove a handful. The gravity would be stronger.  Again according to Newton, the force is inversely proportional to the square distance between the objects, in this case, between the handful and the moon's center of mass. So maybe there's a 1/R2 term too, where R is the radius of the moon. This is almost right. The thing we're interested isn't quite the force, but the energy required to move an object against that force. The energy required to move an object against a uniform force is just the force multiplied by the distance you move it through. Here the distance is enormous but the force isn't uniform either - it falls off with distance. So maybe as a first approximation we can say that we have to move the object "about" a distance R to get it away from the moon's gravity. Multiplying R by 1/R2 gives 1/R.

Great! Now we know the approximate energy required to blow up the moon. It's

Well, at least to the accuracy of our hand-waving dimensional arguments. In reality there's a factor of 3/5 and a more careful calculation shows the gravitational binding energy is

In any case, the gravitational binding energy for the moon is about 1029 joules. The biggest thermonuclear weapon the US ever made was on the order of a 1014 joule device, so you'd have needed at least a quadrillion of them to blow up the moon. Even in the crazier days of the Cold War, our lunar neighbor didn't have a whole lot to worry about.

*Most of the images and equations on my old posts were borked in the transition to WordPress and NatGeo. It's not their fault - our old system was a disaster area. We're working on getting it fixed.

Cobra Commander: [Irritated] What _is_ it, Destro?
Destro: Commander, the Joes have located our secret lunar base and have launched a nuclear warhead at us.
Cobra Commander: [Best Inspirational Leadership Tone] Do something, you fools!!!