Interference - on the moon!

Wow, lots of moon posts these days.  This one is going to talk about a question left by commenter ppnl a couple posts back:

ppnl: So could you use a pair of one meter telescopes a kilometer apart to create a point of constructive interference on the moon as small as what would have been created by a kilometer size telescope?

Me: I don’t think so. The whole thing about interferometers having the resolution of a telescope the size of the baseline is sort of a hand-waving way of sweeping of lot of technical detail under the rug. You could make some pretty closely spaced interference fringes on the lunar surface, but you wouldn’t be able to generate a bright point like you would from a kilometer-sized telescope.

ppnl: No it wouldn’t be as bright as what could be achieved with a kilometer sized telescope. But the central peak should be about as small as the kilometer telescope and much brighter than with a single one meter telescope. It is also scalable to many telescopes.

I think anyway. I’m not sure how to do this calculation.

Well hey, let's find out. We won't bother to do a hardcore calculation though - this is the kind of thing where intuition built on graph can go a long way.

Light is a wave, and experiences interference phenomena. When two waves combine, their peaks and valleys add linearly. So if we had two light waves passing through each other, and if we were capable of freexing the fields in time so we could examine them directly, we'd see something like this (first as a 2D plot, second a a 3D plot): 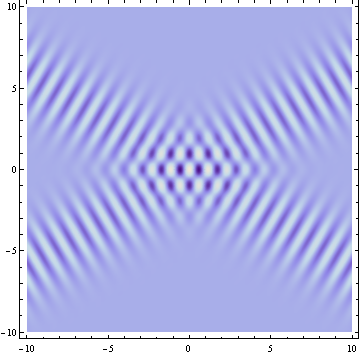 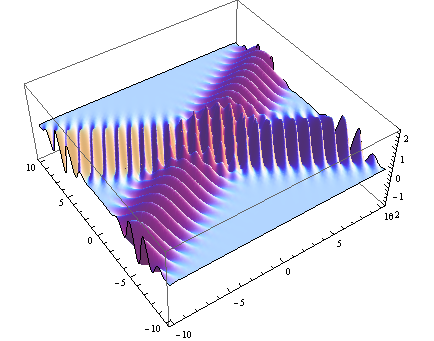 3D version of the previous plot

But unfortunately we can't see waves frozen in time. Light oscillates very quickly - visible light close to a quadrillion times per second - and our eyes can't respond that quickly. Instead, our eyes see the energy carried by the light averaged over the response time of our eyes. Energy is proportional to the square of the electric field, so to see what this looks like we can plot the square of the above chart averaged over time: 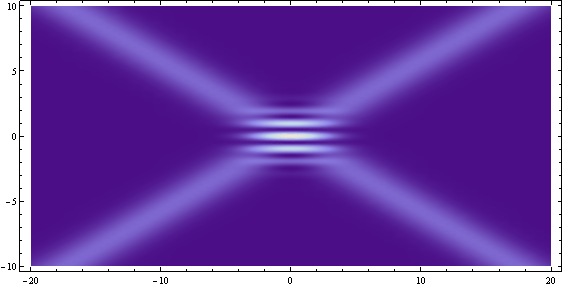 The intensity of two intersecting beams

So what happens if we combine the beams at a smaller angle? This: 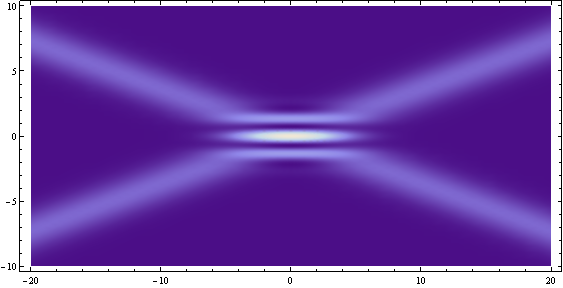 How about a larger angle? 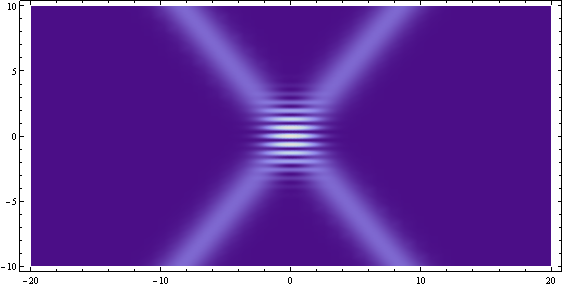 You can see the pattern: bigger angles mean the fringes are smaller and more closely spaced. Smaller angles mean the opposite. This is closely related to the reason larger telescopes have better resolution: the bigger the angle that the light can enter from, the smaller the features in the image that can be built up from what amounts to the interference pattern at the focus. Now imagine we combined six beams of light, coming in from all the previous sets of angles: 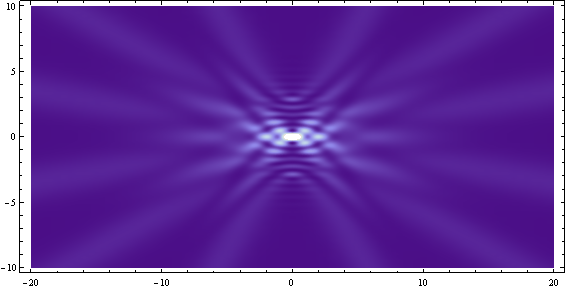 Pretty! But more to the point, we're starting to get a small dot in the center. We might expect that in the limit that we have an infinite number of beams from a continuous range of angles, we would get a clean, distinct dot at the center whose size was limited by the smallest set of fringes coming from the largest set of angles.

Applying this to the problem of shining a laser at the moon, we see that two widely separated telescopes would produce an interference pattern whose fringe spacing is set by the spacing of the telescopes. But the overall extent of that pattern is set by the size of the two beams, which is set by (and inversely proportional to) the size of the individual telescopes. If you want a clean and tiny central spot, you have to combine many telescopes to the point where it actually ends up being practically a single huge telescope.

All this stuff is what many radio astronomers work with every day. When doing radio interferometry, they don't just have to worry about the size of their baselines. They also have to worry about how the baselines are oriented, what sets of fringe spacings they're getting or not getting in their images, and so on. Optics is a tricky business!

This is how phase array radar works. You have a large number of small antenna. The signals interfere constructively and destructively and so project a microwave beam as if you had a single large antenna. The cool thing is you can steer the beam without moving the antenna. You just alter the phase relationship between signals from the different antenna. You can do this very fast.

So you could move the laser spot across the moon without moving the telescope. Just alter the beam path length between the telescopes to alter the phase relationship.

The process also works in reverse. The terrestrial planet finder was going to use interferometric nulling to find small planets.