Telescopes 100 Years Ago: A Story

I was doing a little research into the history of telescopes, and it was about a century ago that they finally realized how much more potential light-gathering power reflecting telescopes had as compared to the older refracting telescopes. On Mt. Wilson in California, astronomer George Ellery Hale and optician George Willis Ritchey (back then everybody was named George -- look it up!) were embarking on a program to build large reflecting telescopes as the wave-of-the-future of Astronomy. 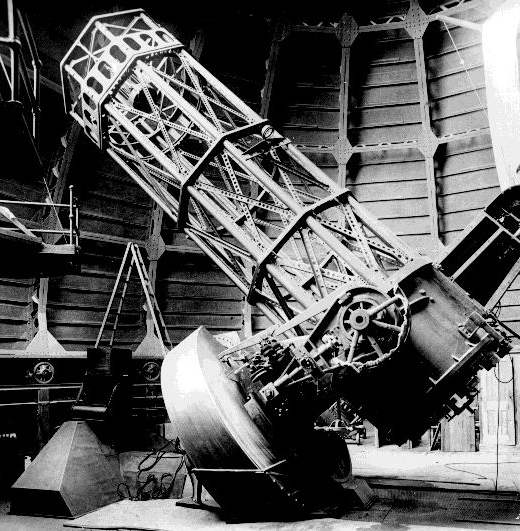 But even before this telescope was operational, Hale and Ritchey were thinking of bigger and bigger telescopes. They had a design to build a 100 inch reflector, and got a grant of $45,000 from J.D. Hooker (not the botanist, the Los Angeles merchant) to start work on it (this was in 1906). Now, to build a reflecting telescope, the most important thing you need is the giant mirror. You know, something like this: 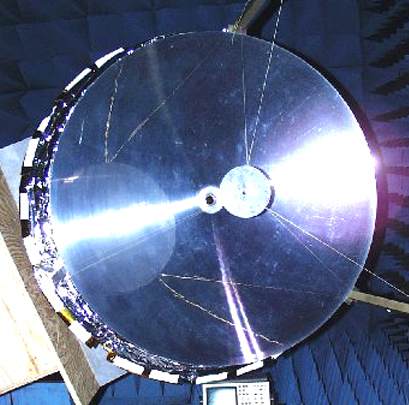 Well, back in those days, $45,000 was hard to come by. So they needed to make sure they got a good glass blank for Ritchey to grind and polish. So he called up St. Gobain glassworks in France and said he needed a 100 inch blank. Well, they had never made a mirror that big before (nobody had). They tried to make a mold and pour glass into it in a single cast, but failed and realized that they needed too much glass (about 9,000 pounds) to do it at once. So they poured it from three separate sources into the mold. Now, because of the way cooling works, they wound up with a bunch of bubbles throughout the mirror, especially at the edges where the three sections met. When Ritchey got the mirror in 1910, he refused to work on it, saying both that grinding and polishing with those bubbles would cause a crack or breakage, and that the mirror wouldn't focus light properly anyway. So he called for recasting the mirror. And he called to have it redone three different times. After seeing the other blanks, he had no choice but to go ahead and work with the mirror full of bubbles, convinced it wouldn't work. This is what the mirror looked like when he was done: 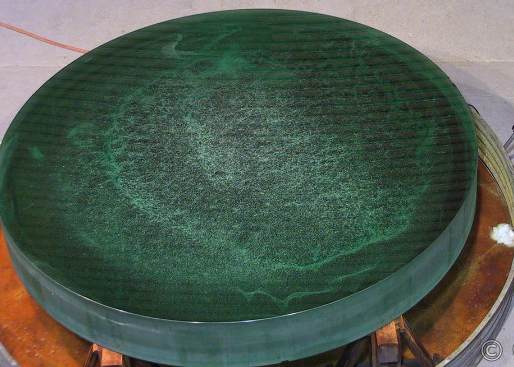 Finally, by 1917, the mirror was installed in a telescope housing facility in Mt. Wilson, and was ready for first light. The date was scheduled for November 2, 1917. Here's the story you won't get from any of the official websites. They had a bunch of reporters and press corps in the room during the day; many pictures of the mirror and telescope were taken. Some people were skeptical that this wouldn't work because of the lack of quality of the mirror, and that the telescope just wouldn't focus properly. Nightfall came, and the telescope pointed up at the sky, eager to snap the first image with the world's newest, largest, and most powerful telescope. But the image wouldn't focus! Hours passed, the sky darkened completely, and the press corps trickled away, disgusted at the abysmal failure of the scope. What good is having three times the light-gathering power if you can't focus your image?! 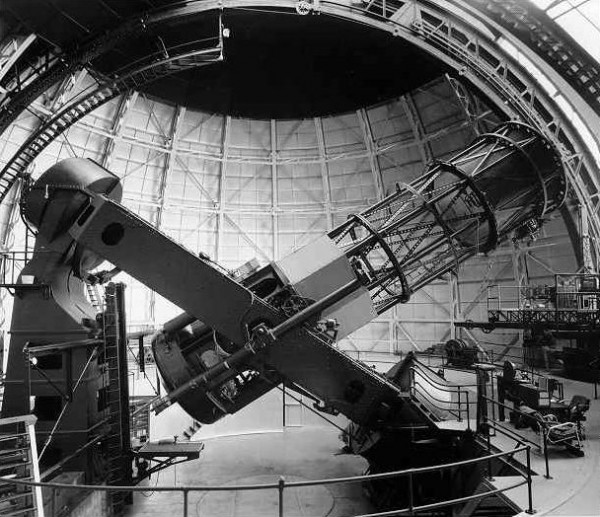 Finally, only the telescope operator was left as night wore on. What he saw happen was remarkable. You see, with the dome open during the day, the glass had heated up with the Sun shining on it, and expanded. The mirror needed to cool off before it would focus properly. As the night wore on, the aberration decreased and decreased, and about 5 hours after everyone else had left, everything slipped perfectly into focus. Ritchey had ground the mirror to perfection, and the bubbles were just so that they were of absolutely no consequence. The press corps had left, but the telescope worked perfectly. Over the next decade, Hubble and Humason used it to discover the expansion of the Universe, and to determine that the "spiral nebulae" were actually other, distant galaxies! And the rest, as they say, is history. (Thanks to Chris Martin for contributing big chunks of information to this!)

I love the way you've written this article. Like an interesting story you've traced the history of the telescope here.

Nice work. A real help to remember historical facts about this great eye aimed at the sky. Thanks so much.