Ever wonder what it looks like to have 300 games of chess going on in one room? 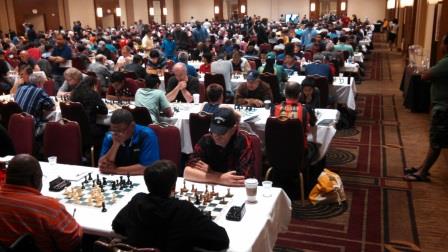 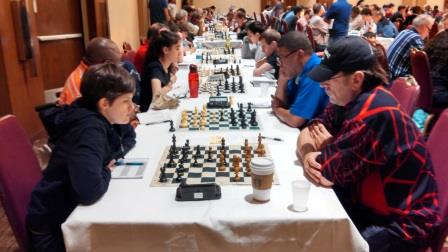 There was a second ballroom, almost as large, which was also filled with players.

Well, we have arrived at round eight. In the prior seven rounds I had scored three wins, two losses, one draw, and one win by forfeit. I was riding high after winning my two previous games. Alas, we have reached the final day of the tournament, when the games are a bit earlier than normal. I don't like doing anything early in the morning, much less play a hard game of chess. 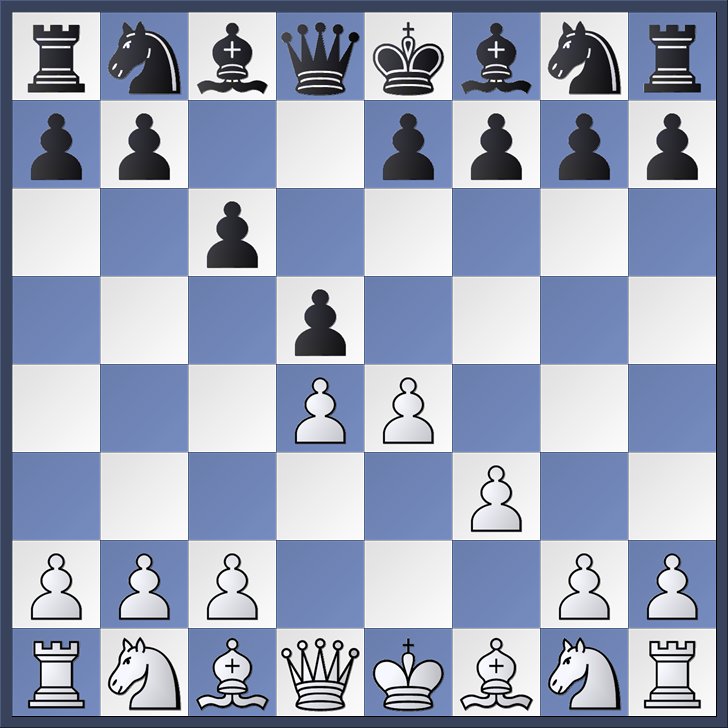 I prepared something different. The move 3. f3 introduces the wonderfully named fantasy variation. White bolsters his center and makes it harder for black to develop his bishop on c8, but at the cost of slowing his development and weakening his kingside. It's a provocative choice.

Let's skip ahead to the position after black's thirteenth move: 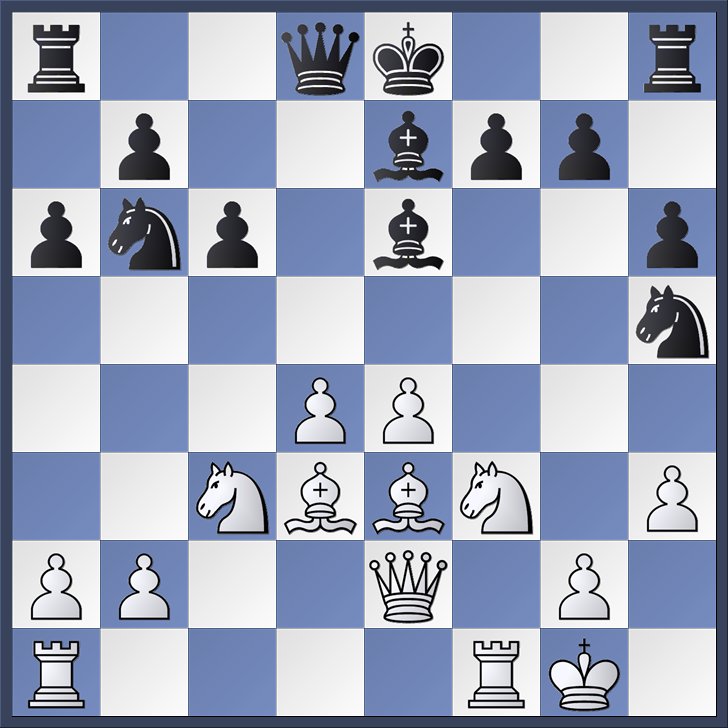 Plainly, black has been taking more liberties than white. Black has not castled, and has wasted time with unnecessary pawn moves like a6 and h6. HIs last move was Nf6-h5, aiming for my weak g3 square but again neglecting to get his king out of the center. But it was black's next move that really put him on the critical list. Play continued: 14. Rfd1 g5. This was one liberty too many! So, remembering the old adage that the best way to meet a flank attack is by play in the center, I found 15. d5! cxd5 16. Qf2. This is an important zwischenzug, taking advantage of the poorly placed knight on b6. 16. ... Nc6 17. exd5 Bd7: 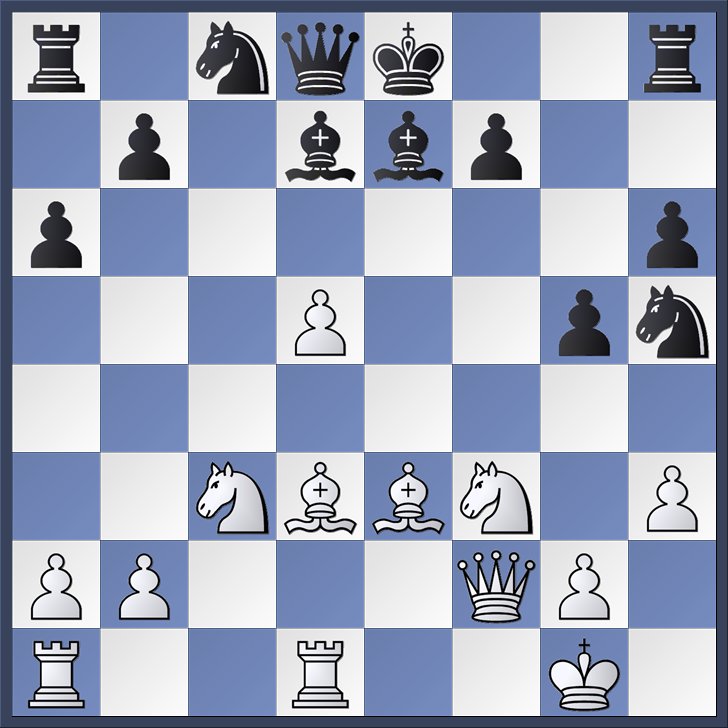 At this point I was starting to drool. White clearly has a big advantage here, thanks to black's awkwardly placed pieces and the fact that his king will have trouble finding a safe harbor. That said, sometimes these positions aren't so easy to play. White has many promising moves but no immediate kill. The computer now suggests 18. Ne5 or 18. Rf1 as winning, but I played 18. Bd4 instead. At this point, had black castled, white would have only a small advantage according to the computer. But I almost fell out of my chair when my opponent banged out 18. ... Rf8. Black's king will now be stuck in the center for quite some time. After the additional moves 19. Re1 Nf4 20. Bc4 Bxh3 we reach this position: 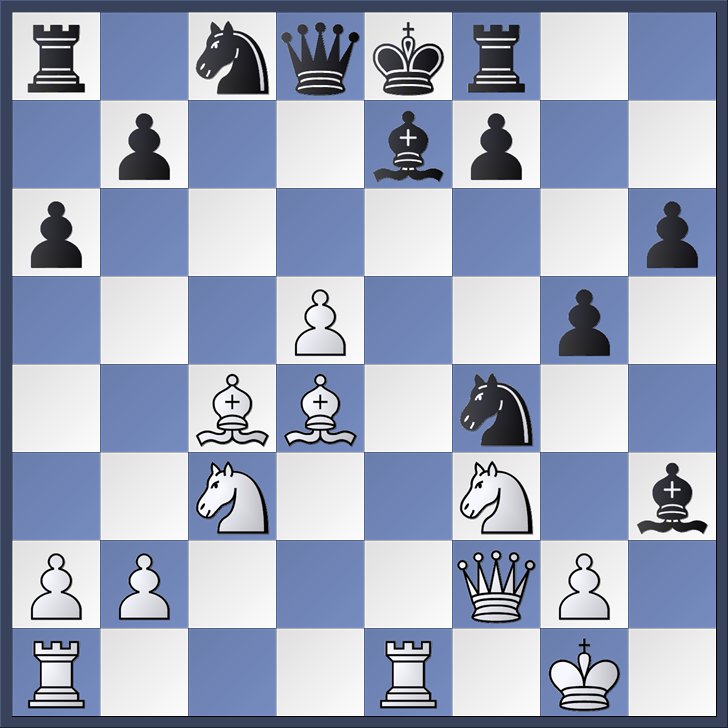 And here I made my first significant mistake. It is reminiscent of the error I made in round two, where I rushed my attack without adequately quelling my opponent's counterplay. Had I played 21. g3 here, a move I thought long and hard about, then black's little demonstration on the kingside would come to an end and white would retain all his trumps. The computer points out 21. Bf1, which also ends black's kingside demonstration and gets the bishop out of the way of any nonsense with Qc7 by black. But I didn't play either of those moves. I played 21. Rad1 instead. This doesn't throw anything away, but it neglects the fact that black can make more mischief on the kingside. I had forgotten that after 21. ... Bxg2, black is again threatening the fork with Nh3+. 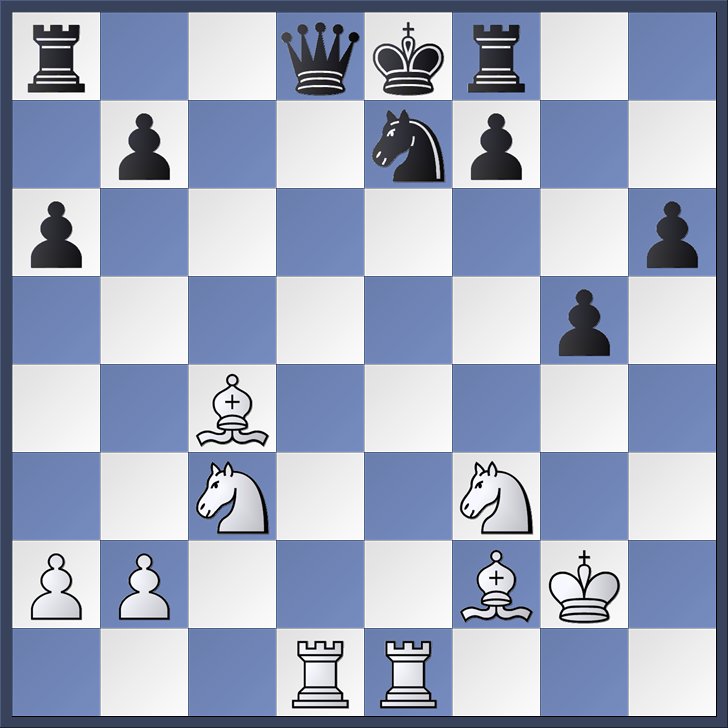 White's position is just overwhelming, queen or not. If black tries something like Qc7, then Nd5 or even Nb5 should finish things in short order. I saw all of this, but managed to overlook a lot of the tactical possibilities in the position. So instead I played 22. Rxe7+ Nxe7 23. Qe3 Bxf3 24. Qxf3: leading to this: 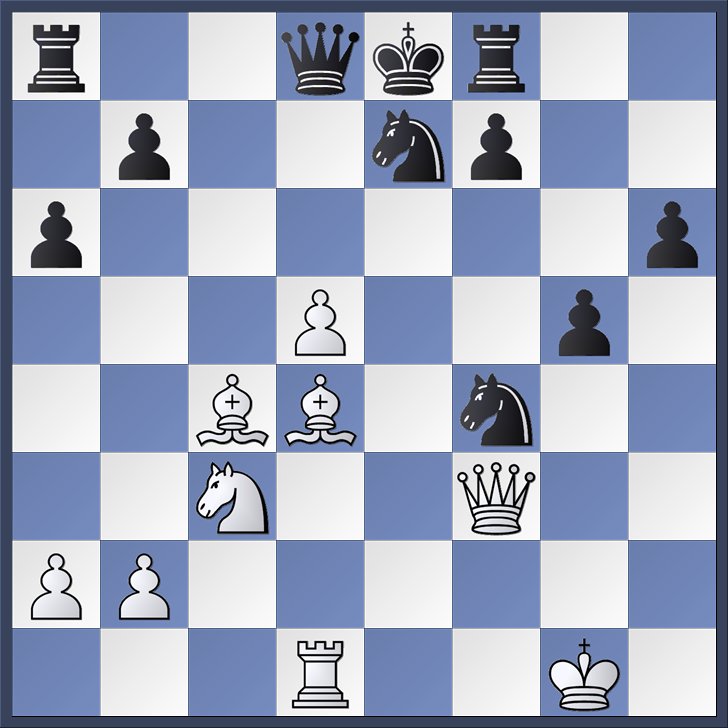 Objectively, white is now lost. That exchange sacrifice was a bad idea, and the computer now suggests a couple of ways for black to untangle and make use of his extra material. Happily, my opponent played none of them. He played 24. ... Rg8, to stop Bg7, an now white is back in business. 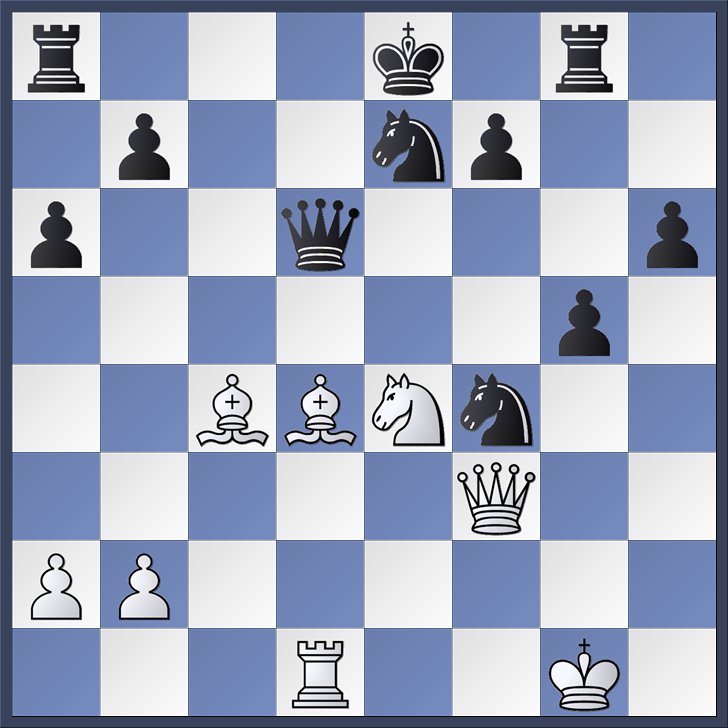 But white does still have a serious winning try in 28. Nd7+. Now black has to find 28. ... Qxd7 29. Bg7+ Kxg7 30. Qxd7. The result is a materially unbalanced position in which white has a clear advantage, but had lots of work to do before he can claim the win. On the other hand, if black responds to the knight check with 28. .. Ke8 then 29. Bxf7+! just gives white an overwhelming attack.

So, a draw. Disappointing, but what can you do? Chess is hard. I also had to smile by at young opponent's incredible enthusiasm. After the game he was gushing about how he was sure he was going to lose and how he was sure I had something better and then started rattling off moves. I could hardly get a word in edgewise! Then his mother came over and dragged him away.

Of course, no trip to the World Open would be complete without some time spent in the book store. Just look at all the pretty books: 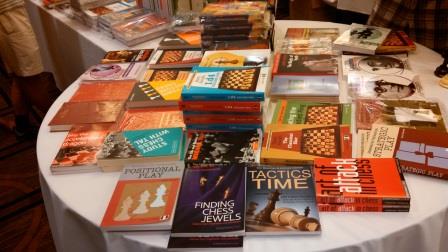 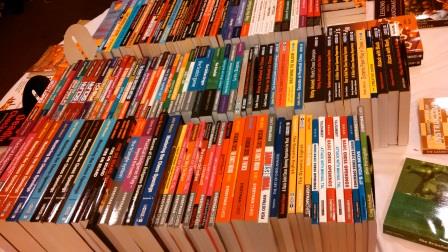 Several of those books now reside in my personal library.

After the excitement of the last three rounds, the final round was anti-climactic. It's always a challenge to work up any enthusiasm for the last round, at least when you're not in the running for a prize. You've just played eight grueling games, and you're wondering whether you rally want to sit down for another four hour game, especially when you know then you have a two hour drive home immediately afterwards. You always have the option of simply withdrawing from the tournament. But I stuck around.

I was black. My opponent opened with 1. e4. This being the final round I wasn't in the mood to try to remember my opening preparation, so I went back to my favorite Scandinavian Defense. Happily, he did not play any of the lines that have made me nervous about that opening. Sadly, he played very conservatively, and most of the pieces were quickly traded. Ninety minutes later we reached this position: 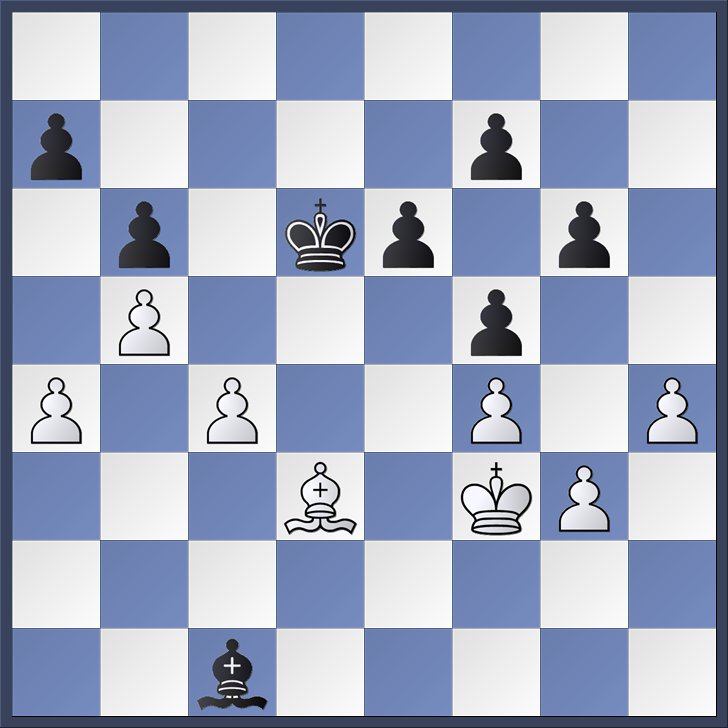 That, folks, is a classic bishops of opposite color ending. It's as drawn as drawn can be. I briefly got excited about the possibility of invading the queenside with my king, but it leads to nothing. Even if I pick off a pawn there it would still be a total draw. So I offered a draw and my opponent immediately accepted.

And that was it! Except for the drive home, of course, which went fine. The final tally was three wins, three draws, two losses and one win by forfeit. A plus score which should net me a few rating points. My opening preparation worked out pretty well. I was never worse out of the opening, and several of the specific lines I looked at actually appeared on the board. I also had two good endgames, one where I drew a lost position, and another where I won a drawn position. That's the good news.

The bad news is that I blew no less than three winning positions because I miscalculated in difficult, tactically complex middlegames. So, I guess it's clear what I have to work on.

Though, really, I have to work on everything, since compared to a master, much less a grandmaster, I don't really understand much of anything.

"I have to work on everything"
Well, yes, even Magnus Carlsen has to. The most effective first choice though is always to work on your weakest spot.

I must say, your round 8 game looks remarkably similar to about 50 of my online speed-chess King's Gambit encounters, filled with outrageous possibilities and oops's and "omigod can he just sack the rook?" moments.

I suspect there's not really much there but did you look at ...f6 followed by ...e5 in your last game?

I am shocked to find that you can actually play into lines that you have specifically looked at beforehand. It used to discourage me that I'd never get into lines that whetted my appetite. F'r instance: I used to play the Four Knights in the open game and I'd salivate while playing 1e4 e5 2Nf3 Nc6 3Nc3 Nf6 4d4 exd4 5 Nd5!?. Played this in a bunch of rated games from G30 to 40/90, and NO ONE EVER TOOK THE PAWN! EVER! There oughta be a law....

I suspect there’s not really much there but did you look at …f6 followed by …e5 in your last game?

If you can get White to initiate the pawn swap (which gives you a passed pawn and undoubles your f pawn), or return his king and bishop to their present squares so that …e4+ forks them, you have a chance of winning. But it's a simple enough ending that I wouldn't count on White to make either of those mistakes. White is free to muck about with bishop and king moves, so there is no way to force a mate unless he really screws up.