Folks, I entertained tonight. Had actual people over at my house and served them dinner.

And quite a dinner it was, if I do say so myself! I prepared filet mignon, with a homemade pan sauce made from balsamic vinegar, Dijon mustard, and chopped onion. For side dishes I roasted some red potatoes and steamed some broccoli. With the potatoes I went old school and prepared them just with salt, pepper, and olive oil, garnished with a bit of chopped parsley. For the broccoli I used chicken stock instead of water as the steaming liquid, and used lots of fresh herbs (rosemary, sage, and thyme, if you must know) to make everything very fragrant. Then I finished with ye olde salt and pepper. Frankly, though, you can put that steak sauce on anything. It's so good it really doesn't matter what's underneath it. For dessert I baked some made-from-scratch reverse chocolate chip cookies. (That's a chocolate cookie with white chocolate chips). But I cheated on that one. I previously made a batch of them for New Year's, and froze some of the extra dough for an occasion such as tonight!

Cooking is a hobby of mine, but since I live alone I rarely have a chance to do it for other people.

There were five of us in all, two other couples and me. One of the couples has two little kids (ages four and two). I was expecting them as well, but my friends ended up getting a sitter for them. Anyway, one couple brought various desserts from a Korean bakery in DC they like to go to. They also brought the wine. The other couple brought a squash soup and a tossed salad. Yum!

As I said, quite a repast! But it turns out my entertaining muscles are pretty atrophied, because I'm feeling completely wasted. I hear that the dishwasher has stopped, but that just means I need to empty it to load up the second batch. There's way more cleaning to do in the kitchen.

The cats, brave as ever, made themselves scarce through the whole ordeal. One of them appeared as soon as the company left, but the other has only just emerged while I've been writing this.

All of which means you're getting a fairly simple problem this week. It's all I have energy for. But it's a good one! It also makes a good companion to last week's problem. This problem was composed by Milan Vukcevich in 1996. The stipulation is helpmate in two: 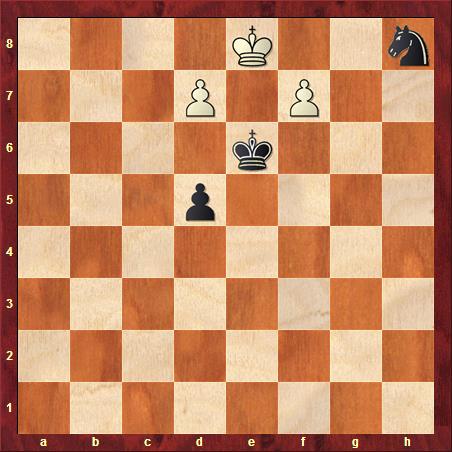 This problem is a Duplex, which means the following: In a normal helpmate, black moves first. White and black then cooperate to construct a position in which black is checkmated in no more than the stipulated number of moves. In a Duplex, we look for two solutions. The first is as just described, while the second involves white moving first, and working with black to construct a position in which white is checkmated.

I think you will find this not too hard to solve. With those white pawns poised to promote, you might suspect another Allumwandlung (AUW). That's where all four different promotions appear. And you'd be right! 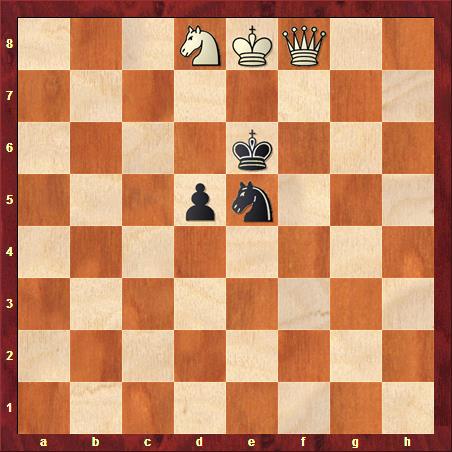 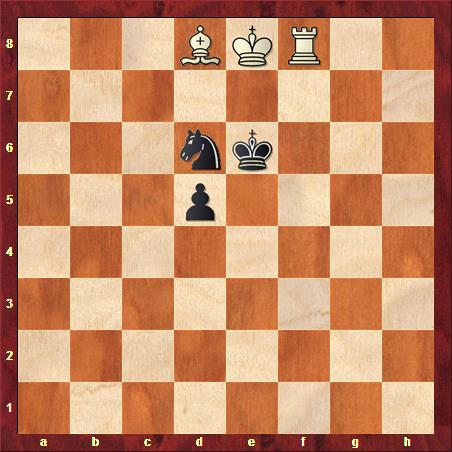 Prior to his death in 2003, Vukcevich could have laid claim to being one of the best composers in the world. This is one of his lighter efforts, but it always amazes me just how easily AUW can be achieved by an inventive composer.

Incidentally, I sometimes wonder if I am just indulging myself with these Sunday Chess Problems. My good friend Bill McNeal always stops by for a comment, (see you in Parsippany, Bill!) but I've often wondered if anyone else cares. Last Sunday, though, I got over three thousand hits (typical for this blog is between one thousand and twelve hundred). The Sunday Chess Problem post accounted for more than two thousand of those hits. Weird! I'm not sure what caused the surge, but I hope everyone who stopped by liked what they saw.

It's been a busy few weeks. I hosted a Passover seder. (What? Atheists can't have seders?) Actually, I run a pretty laid back seder, all the more so this year considering there were goyim in attendance. It's mostly just a big dinner with some Hebrew and matzoh and charoset thrown in for fun.…

You just knew I was on a diet, didn't you? Kind of a helpmate with kale.

Nice & simple with this one, but the more I look the more I'm pleased with its design. Like watching pawns go into full bloom in a perfectly constructed little greenhouse.