Well, the final snow tally in my neck of the woods was a little over two feet. Impressive! On the other hand, there doesn't seem to have been much damage. There were no strong winds, we never lost power, and all of my trees seem to be intact. And it means I get another snow day tomorrow! Cleaning up after two feet of snow takes some time. I think my students might forget who I am.

In other news, it seems that the Grand Mufti in Saudi Arabia is not fond of chess.

A video clip of Saudi Arabia's top cleric saying that the game of chess is “forbidden” in Islam because it wastes time and leads to rivalry and enmity among people has provoked heated debate, and widespread criticism, among Arabic Twitter users.

The clip was shared on YouTube in December, gaining traction in recent days on social media. Some Twitter users mocked Grand Mufti Sheikh Abdelaziz Al Sheikh, saying chess is an intelligent game and that is why conservative clerics decry it. Others defended his religious advice, saying that many other Islamic scholars have also warned that the game can be addictive and cause people to lose focus from their daily prayers and remembrance of God.

I have a really fun problem for you this week. It was composed by Noam Elkies--a mathematician!--in 1994. It's an endgame study, with the stipulation that white is to play and draw. 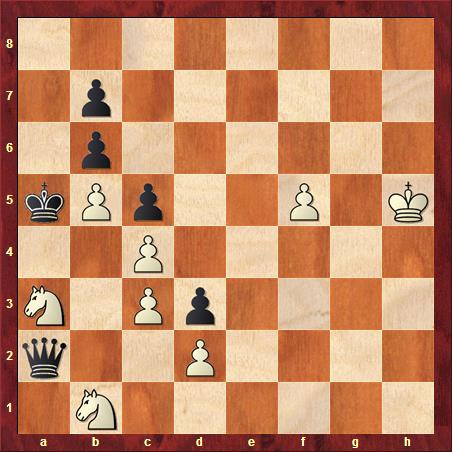 Let's first notice that white is completely tied up in knots in the lower left corner. He does have the move Nc2, however. This obviously loses, since black will just take the knight with his pawn, but it does mean that white can't count on any stalemate defenses based on the fact that he has an f-pawn.

So white only has one chance. He has to try to promote the f-pawn. After the obvious beginning 1. f6 Qb3, white already faces a choice.

The basic plans are clear. Black is going to liberate his queen from the lower left corner by giving check on d1, and then emerging onto the kingside. Since the black queen is in time to stop the white f-pawn, white will need to move his king closer to the pawn to support it. That means that on the next two moves, he is going to move his pawn to f7 and his king to h6 (or maybe g6) to support it.

But what's the point? It seems like white is just losing. By using standard queen maneuvers known to every young chessplayer, black will force the white king to move in front of his own pawn. Black will take that opportunity to move his king up to a4. Then the white king will emerge from in front of the pawn. But black will just repeat his queen maneuvers, force the white king back in front of his own pawn, and then take the opportunity to move his king again, this time to b3. After repeating this maneuver a bunch more times black will march his king all the way up the kingside. The combined force of the black queen and king will be more than enough to take the white pawn and that will be that. It's all very tedious, but the end does not seem to be in doubt. 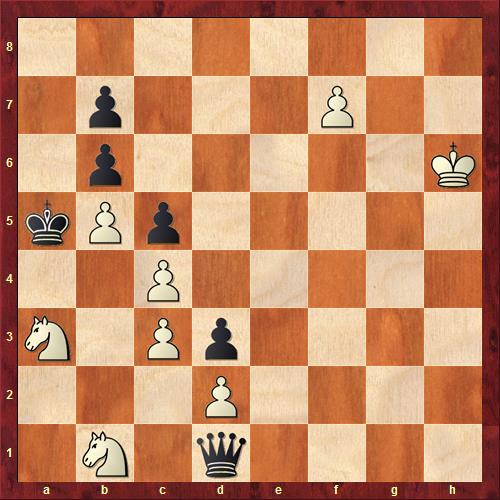 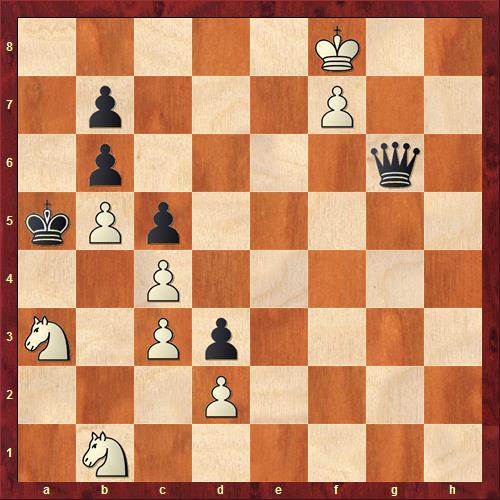 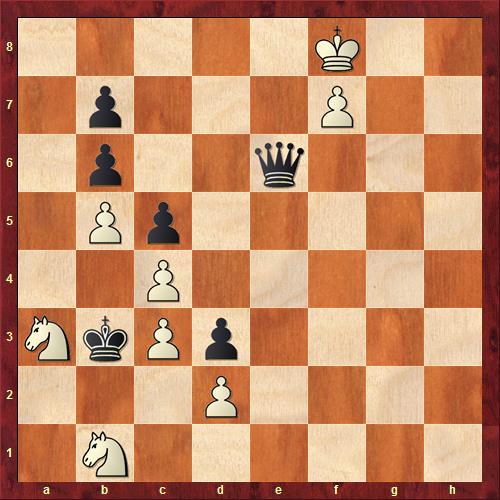 I think it's time to hit fast-forward. After two more repetitions, black gets to play the move 24. ... Kc1. 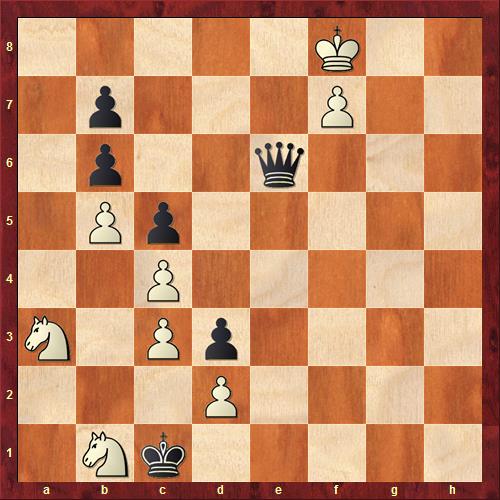 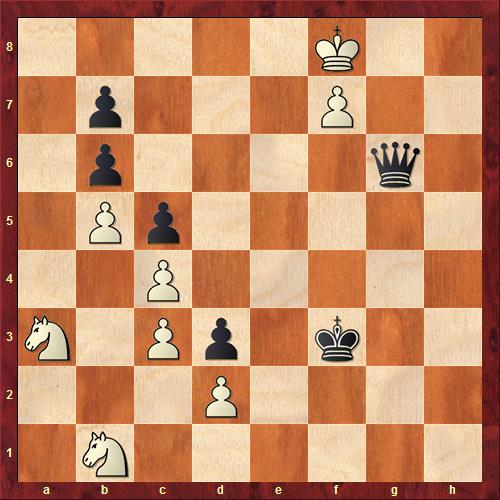 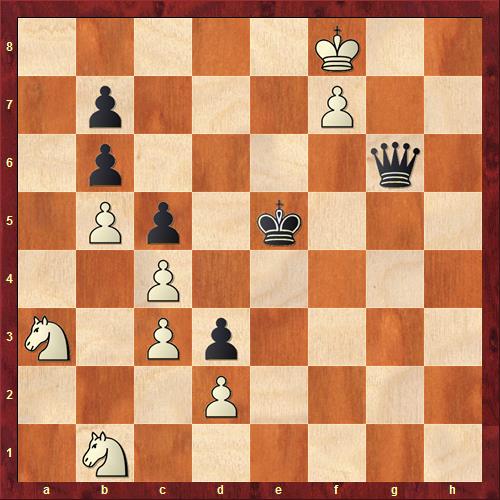 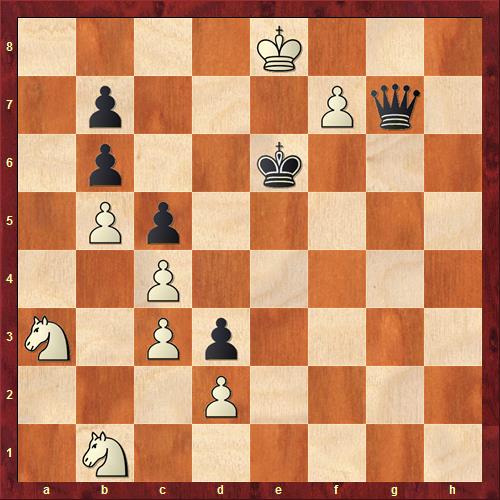 Now what? White can promote his pawn, but it will do him no good. Promoting to a queen means getting mated instantly on d7, while giving check by promoting to a knight only postpones mate for few moves. So what can white do? Has it all been for naught?

Of course, if white had played 2. Kh6 followed by 3. f7, it would only have been forty-nine moves, and black would win after all.

Incidentally, I let Houdini analyze this position for several minutes. It claims a small advantage for black, but fifty moves is a bit outside its horizon. But when I laboriously played through the entire solution, it instantly asserted the fifty-move rule at the appropriate moment.

Last week's study went over well, so how about another study from Alexis Troitzky? It's white to play and win in this position: There is an astonishing amount of strategy wrapped up in this simple position! Let's start with some general considerations. White must try to promote his pawn as…

I have previously mentioned that the Washington International was the best run and most enjoyable tournament I have ever played in. One reason was the fact that all equipment, sets and clocks, was provided. And not just any equipment! Look at these beautiful wooden chess sets we were given to…

I have something a little different for you this week. Normally I show you composed positions in my Sunday Chess Problem posts. But this week I'd like to show you two shocking moves that occurred in actual games. The first comes from another of Aviv Friedman's videos. He did not mention the…

Me and my homeys got together last week for one more run at the US Amateur Team East: The fellow in the Rocky Balboa hat is Ned Walthall. In the middle is Curt Kimbler, followed by Doug Proll on the end. How long have we been playing chess together? Well, let's just say that Ned used to give…

How funny! I just kept thinking " but I don't see the stalemate" at the next - to- last & last diagrams. Is this one a first? I mean, I'm no afficianado, but this looks diabollically original to me. Nice pick, Jason!

A funny thought: in a tournament game at standard time controls, if I were White I'd have been counting the moves starting around move 35 or so for sure. Alternate universe.

Of course, it's an endgame study rather than a mate-in-X, so that's fine.

That said, I'm sure I have missed something.