"I wouldn't dream of working on something that didn't make my gut rumble and my heart want to explode." -Kate Winslet

Welcome back for another Messier Monday! At the start of each week, we take a detailed look at one of the 110 deep-sky objects that make up the Messier Catalogue. This week, we've got a very special happening in the night sky to introduce you to. 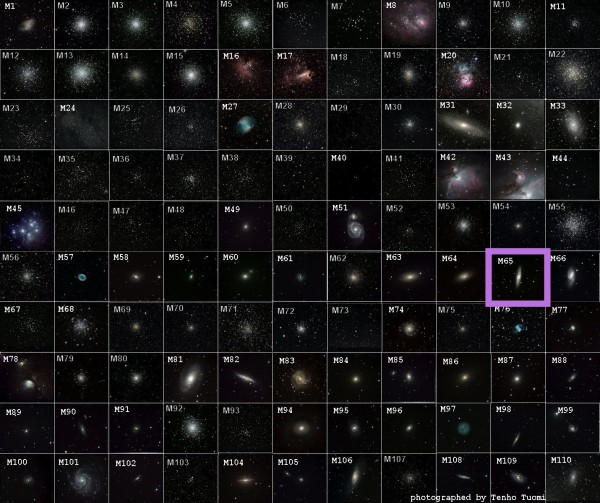 One of the most common class of object in the Messier Catalogue are galaxies external to our own Milky Way, which make up a whopping 40 of these 110 objects. Occasionally -- a little more than about once-per-century -- a supernova will explode in a typical, Milky-Way-sized galaxy. Although we haven't seen one in our own skies in over 400 years, we've witnessed a total of 54 supernovae in these known Messier galaxies, with 25-out-of-40 of these galaxies having been caught in the act of having at least one supernova since we've started looking.

Well, as of 3 days ago, you can add one more to each list: Messier 65! Here's how to find this galaxy, with more details to come! 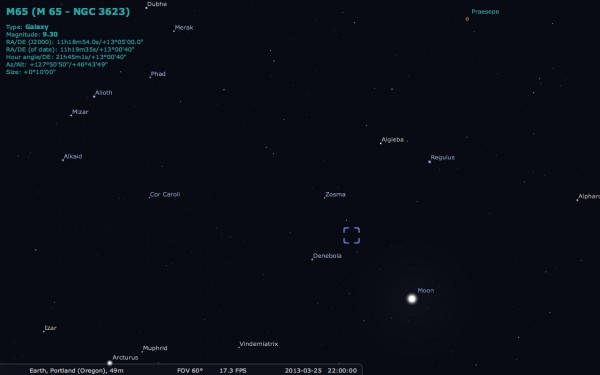 Image credit: Me, made with the free software Stellarium, via http://stellarium.org/.

Beneath the Big Dipper -- below the cup-and-handle -- you'll find the well-known constellation of Leo the Lion. Tonight, the Moon will near the bright star, Denebola. Back towards Regulus -- the brightest star in Leo -- you can find the somewhat dimmer naked-eye star, Chertan. And, if you wait a few days for the Moon to move out of the way, the faint, nearly edge-on spiral of M65 will be visible through even a decent pair of binoculars, if you know where to look! 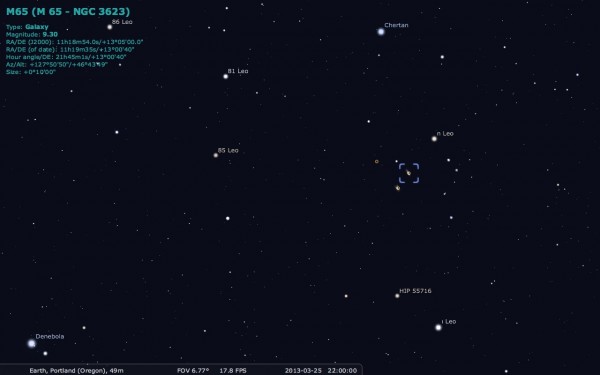 Image credit: Me, made with the free software Stellarium, via http://stellarium.org/.

Just three degrees away from the blue star Chertan (and a mere one degree away from the still-naked-eye star, 73 Leonis), you'll be able find this spiral galaxy in just a few nights, as soon as the Moon is out of the way in the night sky. 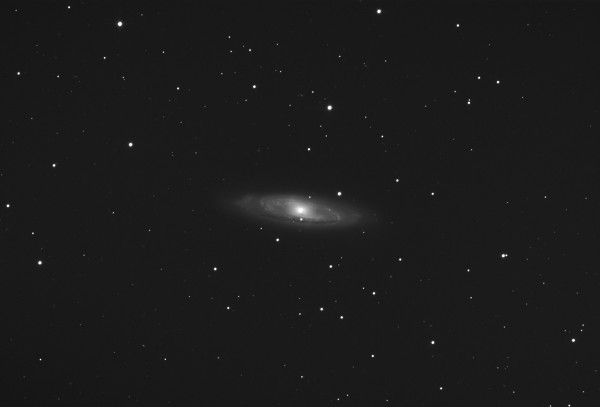 The bright stars you see are from our own galaxy, but Messier 65's bright, central nucleus and sweeping dust lanes are clearly visible in this exposure. For those of you who have some wide-field equipment, Messier 65 will be one of the dominant extended objects you see as part of the famed Leo Triplet, shown in this 4.4-degree field-of-view exposure, below! 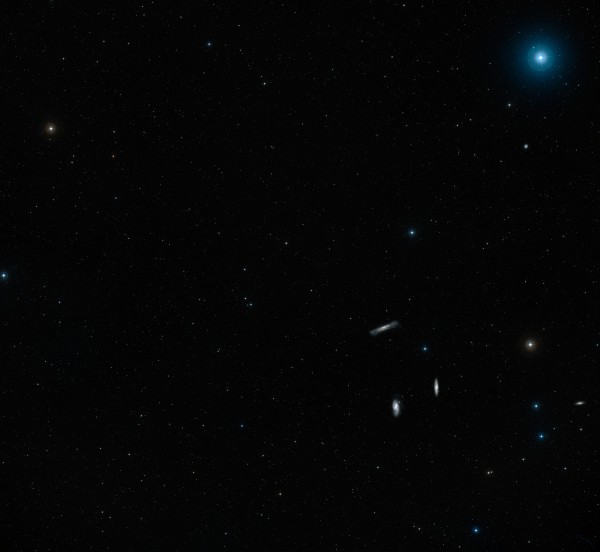 Messier 65 is the extended galaxy farthest to the right in the image above of the triplet, which are very clearly gravitationally bound to one another. Although all three galaxies are approximately 35 million light years away, they don't appear to be interacting gravitationally with one another, suggesting that -- much like for us and Andromeda -- a gravitational merger is likely lurking in the future for this group!

A closer investigation reveals the majesty of these three objects. 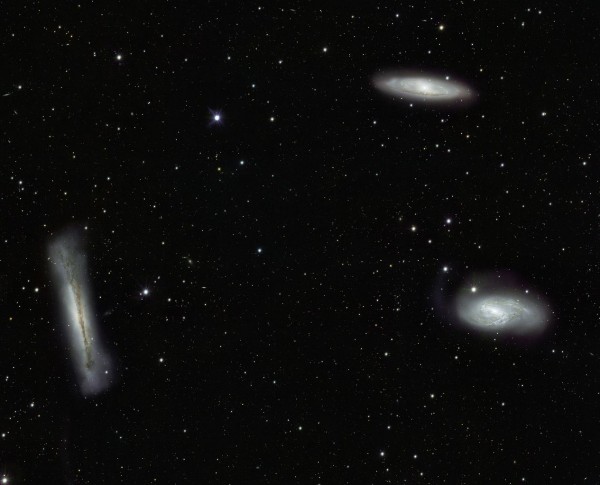 Interestingly, Messier 65 and the other compact, bright spiral in the triplet, Messier 66, were both discovered by Charles Messier himself on March 1st, 1780, but the third member of the triplet -- despite having a nearly identical brightness -- eluded him!

The triplet is often photographed together by amateur astronomers, and makes for a glorious sight. 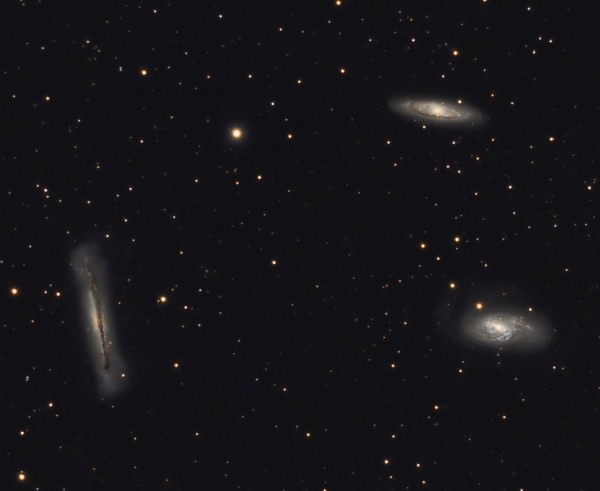 Photos of this nearly edge-on spiral grace many corners of the web, including Volker Wendel's site, where he captures M65 in outstanding detail. 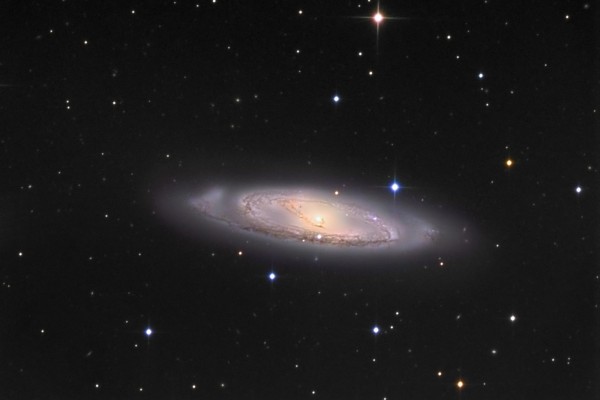 Alvin of LightBuckets spent over 18 hours imaging M65 along with its nearest galactic neighbor, M66, with a 20" telescope to produce this masterpiece, below. 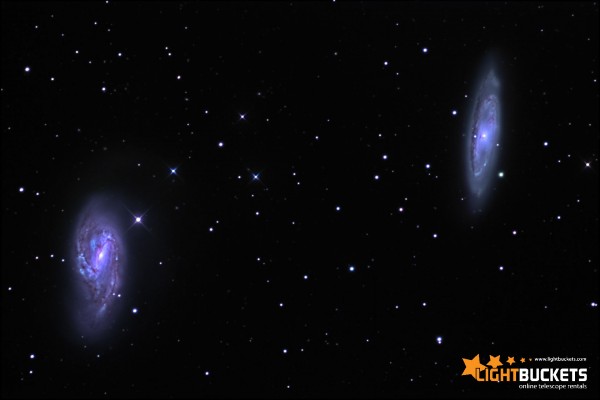 Of course, a professional telescope can do a little better. Normally, Hubble provides the best views of a galaxy (when available), and even though this image was taken with the old WFPC2 camera, it's still an outstanding shot, of this galaxy's nucleus. (In unprecedented high-resolution, as only Hubble can deliver.) 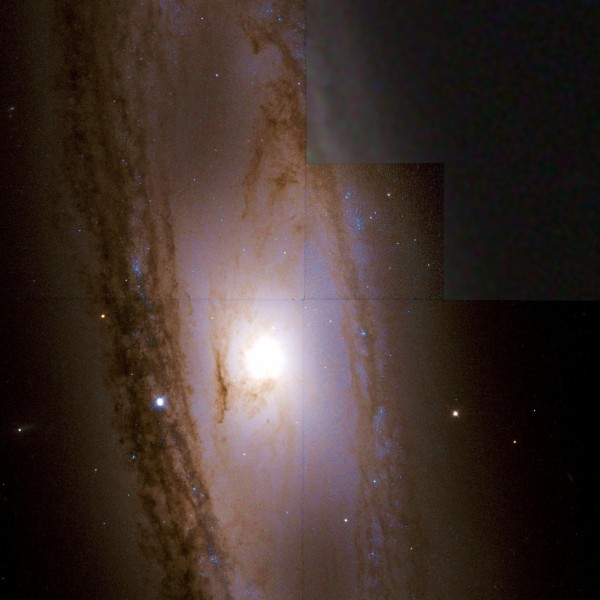 And -- for a nice, focused view of the entire galaxy -- here's what the European Southern Observatory sees when it images M65.

Pay attention to the level of detail, here, and remember that practically every "point" of light you see is a star from within our own galaxy, while the stars of Messier 65 itself are visible as mere fuzzballs. You'll notice that, lined up with the core of the galaxy -- appearing to extend directly "down" from it -- are two foreground stars that are part of our own galaxy, while just slightly "upwards" of the 3 o'clock position, in a chance alignment with the sweeping arm structure of the galaxy, is another, dimmer star.

Why do I bring these details to your attention? Because just three days ago, an announcement was made. M. Sugano, from Kakogawa, Japan, took the following photograph that shows a new star in this galaxy, where none was previously seen. Have a look for yourself! 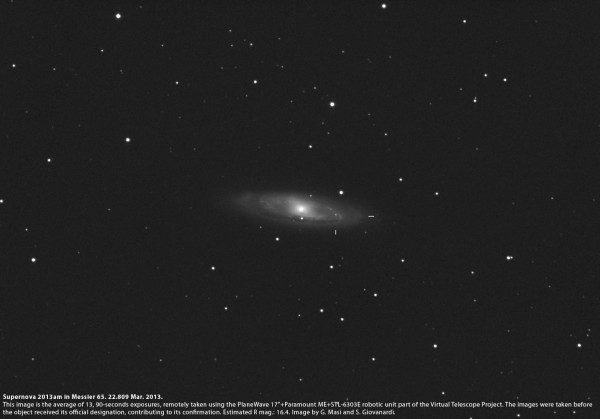 Do you see it? I've zoomed in an added a circle, to help show you where to look.

That extra "point of light" is a supernova! Now confirmed, it will henceforth be known as SN 2013am, and is the first supernova to go off in a Messier Object this year! More images, as they become available, will appear here, and as soon as the Moon moves out of the way, those of you interested in supernova-hunting will have your opportunity to see this object yourself!

It's expected to brighten to a maximum of magnitude 11, which means anyone with even a modest telescope should be able to find it without a problem! In fact, if it does reach magnitude 11, it will be about 20% as the entire rest of the galaxy, combined!

And the best image I've seen so far? That's Manfred Mrotzek's, shown below. 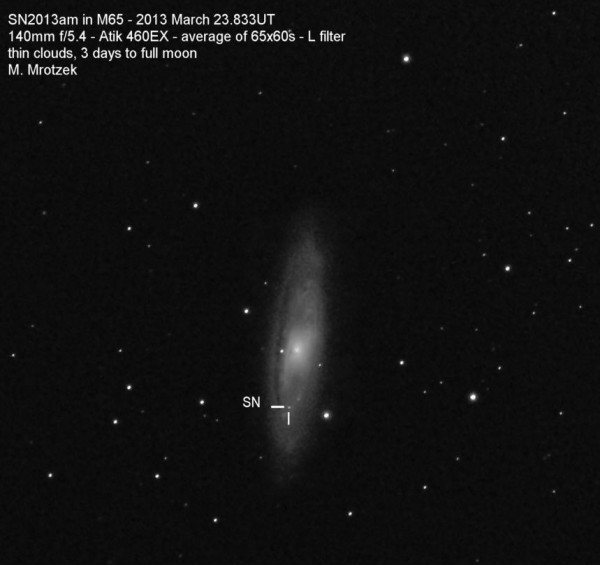 And that's a wonderful way to end this Messier Monday with a bang! Including today, here are the Messier objects we've taken a look at so far:

Come back next week, where we'll learn about a new deep-sky object here, on another Messier Monday!

Where is there a list of SNs? I'm interested in seeing how many new SNs are detected per year. I assume the numbers/yr are increasing due to improved instrumentation/computing

The Central Bureau for Astronomical Telegrams keeps a list of all the supernovae which have been announced in its telegrams:

The number found per year has risen since the 1970s and 1980s, but it has also fallen a bit in recent years as certain supernova search teams end their efforts.

Ethan, how far away would we have to be to remain comfortable if one of these were to go off in our own galaxy? Are there any known candidates ready to go within the next 100k years? What would it look like from here if they popped?

Betelgeuse is the well known one. Eta Carinae is even bigger but further away by a fair old bit.

Both are going supernova "any time now", but that's on a stellar timescale, so maybe thousands and thousands of years.

I keep seeing the 11th magnitude prediction, but I think there may be a problem with that. The SN does not seem to be brightening much, plus per ATel #4910: "These weak Swift UV detections confirm a significant extinction, in agreement with the reddened optical spectrum (as also reported by ATel #4909)."

"Significant extinction" needs to be defined. I was hoping to see this SN the second week in April during a Messier Marathon, but I'm beginning to doubt that will happen. After 34 years of Marathons, last year was the first time there was a supernova in an M object during the Marathon. This would have made two years in a row.

At about 2230 hrs EST on 5-20-2013, I observed a very bright light in the sky just to the right of the Big Dipper. The light increased in brightness then faded and went out. What did I see? I think it was a supernova. It was pretty cool and it was my first. I did not have any visual aid. Just happened to look up while out in the yard.

I now live on Molokai, and either the night of the 26 th or 27 th of May 2013 my daughter and I were sitting on the patio at approx. 9:30 pm. We observed a series of very bright flashes white in nature, and at intervals of approx. 20 seconds apart. This occurred about five times almost directly overhead. This was not a satellite or aircraft, I am a pilot and have flown over 20,000 hours for the state of Arizona, I know the difference. It was so intense that it frighten my daughter who is 44 yrs of age.

Just wondering if anyone else observed such a sighting, about the same time.