Welcome to the Police State

I was going to put this on my facebook page, but it seemed worthy of a higher status. As it were.

We live in a police state, here in America, in the same way one gives oneself a particular religion or non-religious label. Unless you are a priest, a habitually repentant sinner, or like me, a habitually annoyed atheist, you usually aren't anything. Someone can't look at you and pick out your belief system. It is in the background lurking around doing nothing, ignored and all but forgotten most of the time. But when needed out comes the book (The Bible, The Origin, whatever). Our police state, like most people's religion, can be turned on or off as needed by most people with privilege, or at least, someone is turing it on and off so it can spend a lot of time in the background doing nothing, ignored and all but forgotten most of the time. The other day a fugitive who apparently lives in the wooded swampy areas that permeate the part of Minnesota I live in (ever since he executed his lover at a gas station, then ran him over with his BMW, a couple of weeks ago) was spotted, possibly, at the nearby small airport. I saw pictures of the police response. It looked like Ferguson, with the armored vehicles, cops wearing storm trooper gear, and all that. Yes, the police state is always available and that is what the police state looks like to the privileged.

If only that was all the police state was. 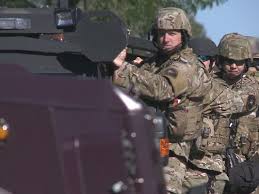 Police searching for fugitive near my house. They may be overdressed for the occasion. But maybe not.

You see, the Ferguson Event, where the police showed up in the Storm Trooper gear, is not really the thing to worry about. If that's all they did, we'd be fine. So what if the police need to show up every now and then in the large black van, back door opening, one, then another, then another, storm trooper attired cop hopping out and going into squat-move-stalk stance and loping off weaving back and forth among themselves and holding their guns to their noses like the priest holds the crucifix at that one point during mass, "hut, hut, hut" serpentining into the danger zone. That would only be now and then, when "needed" because of the fugitives living in the heavily wooded swamps.

What really happens in Ferguson is not that. The real problem, in Ferguson and everywhere our nation's African American's and often Hispanics are mostly sequestered, is a totally different thing.

If you want to know what happens, you need to do this. First, get black. Once you are black it is much easier. If you are not naturally black I'm not sure how you do this. Anyway, get black and then go stand on a street corner. If you are of the right age white people will pull over and try to buy drugs from you. If you are the right sex people will assume you are a prostitute. Eventually the police will stop by and they'll throw you in jail for no good reason. But it will go on your record. Eventually, you'll get thrown in jail for no good reason a certain number of times, and then you won't get out. For no good reason.

Prefer to drive? You can do that. Same effect. A white person I know works mainly with white people in a white town in a white part of the Twin Cities. There are a few black people there, of course, but in her unit only one African American colleague. Regular guy. Drives slow. He is stopped by the cops on the way to work about twice a month. No one else who works there has ever been stopped by the cops. Driving while black was big thing, on the news and all, a while ago. Still a big thing. Just not so much on the news. You still cant' drive while black in many communities.

Beverly Hills, Missouri has 571 people living in it.

Beverly Hills, Missouri is 92.7% black. Of the remainder, about half are white.

(I know you are wondering: As far as I know a lot of the cops in that town are non-white.)

That, ladies and gentlemen, is the police state. It is not Storm Troopers on armored vehicles. Unless necessary. It is not black helicopters. Well, now and then with the helicopters. It is not drones. Usually. Mainly it is day to day police work that pays for itself because every few minutes somebody gets a fine for being black and living in one of those places where the African Americans in our country are generally sequestered.

So this all started out me wanting to tweet an article I read in Slate, then elevated to a Facebook posting with comments, and I ended up taking it a little farther than I thought I would and now I have to get on to other things. Go read the article for yourself. And the Washington Post article it is based on. Be careful though, the WaPo piece is a thinly disguised Libertarian argument.

the WaPo piece is a thinly disguised Libertarian argument

I've always liked Balko and his obtaining and commenting on various Missouri SWAT raids reveal certain 'consistencies' within those agencies to me.

(1). "Do it now!" is not so much a command for the one at the other end of the gun so much as a conditioned dogwhistle for the team members themselves. --

I saw evidence of this in Ferguson where the Giant Voice System would, with regular cadence, cite "Do it now" softly. Almost, as if it were a chant.

The crowd was not at ease. -- The cops were having a particularly calming bit of 'me time' out of an otherwise busy workweek.

(2.) That fragrite body garb they find so vogue malfunctions in the presence of dog slobber.

(Though, what I really believe is that the dogs (no matter the type or threat) are invariably shot because they would otherwise be able to identify the perpetrators out in public when they have not their balls strapped on. -- Loud noises, obnoxious smells lights, traumatic on my humans; These kinda things stick with a fido)

the Blac Bloc says Do it later!

In the councils of government, we must guard against the acquisition of unwarranted influence, whether sought or unsought, by the military-industrial complex. The potential for the disastrous rise of misplaced power exists and will persist. We must never let the weight of this combination endanger our liberties or democratic processes. We should take nothing for granted. Only an alert and knowledgeable citizenry can compel the proper meshing of the huge industrial and military machinery of defense with our peaceful methods and goals, so that security and liberty may prosper together.

With all the privatizing of prisons there is an incredible need to fill them up. You can thank the Republicans for this. Who suffers? The minorities, because most of the police forces are white. It will be very interesting 20 years from now when whites are the minority!