Trump may be 9 delegates short of a lock

Moments ago, Donald Trump's delegate count effectively went above the number needed to guarantee the nomination at this summer's Republican National Convention.

As reported by NBC, "Donald Trump now has the support of 1,238 delegates — just a hair above the 1,237 threshold needed to clinch the Republican presidential nomination"

The update includes adding actual delegate counts for races so far, recognizing that for Pennsylvania this means only 17 delegates out of 54, even though he won there, because Pennsylvania is strange. Also, some other revisions.

This estimate still uses a combination of polling data and information in this discussion at FiveThirtyEight by Nate Silver, as well as polling data.

My NEW estimate puts him at 1228 delegates, or 9 delegates short. Here's the data: 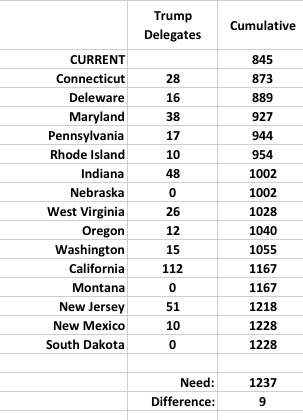 Throughout the primary season, Trump has not played the ground game, and Cruz has. That's why I picked the "Trump shooting himself in the head" picture for the top of the post.

Here's what I mean by that. Say a state awards 10 pledged delegates to you, and 12 to your opponent. Your opponent. Your opponent is a really great guy, I mean, really great, everybody loves him, and he knows, really knows, how to close a deal. So he figures he's closed the deal and moves on to the next primary. But you, being a more experienced politician with a ground game, start making calls. You got a 10-12 split, and that will be reflected at the convention when this state casts the first ballot, but after that, the delegates at the convention will be to some degree able to change their vote on the next ballot. So you make these calls, and make sure that all of your own supporters show up at the right time and place to position themselves as national convention delegates. So when the national convention happens, you have 18 people who like you and your opponent has only 4. That does not matter for the first ballot, but it give you a win in that state for the second and beyond ballots.

It is not quite that simple, and the lack of simplicity makes your ground game stronger. There are rules that vary somewhat across states that say that only some of the delegates are free to choose on the second ballot. There are also unpledged delegates from most states, and they vary in number and they vary in how much influence you may have over them. So you expend your resources efficiently to maximally bring delegates, both pledged and unpledged, into your fold. At the end of the day, you win the nomination. And maybe your name is Ted.

I don't think anybody outside the campaigns has a good idea of what might happen on the second ballot. Even within the campaigns there has to to be a lot of uncertainty. It will be an interesting convention!

A bit of discussion on this on the Rachel Maddow Show:

It will be extra interesting if Trump's stormtroopers go to the convention hotels and start stomping white Christians in the hallways for having voted against him, as his right-hand ape recently threatened.

Indeed, it will be VERY interesting to see what happens.

When the GOP was in Saint Paul, anarchists plotted and planned disruptions, but their disruptions were minor and they took way more heat for it from the St. Paul police and mayor. This GOP convention may well be much more lively wrt violent attacks, etc. I wonder if the local police departments are making any special preparations.

Almost makes it a pity (especially from a for-profit media point of view) that the SS (the US Secret Service, duh) put the kibosh on bringing firearms into the G0P convention...

What an exciting exclamation of Second Amendment self-righteousness might be witless --er, witnessed-- on that day. "The Shots Heard 'Round the World..."

Whether he wins or loses, the party is going to be in chaos and it's going to hurt them down ballot. Though the Democrats are doing their best to piss away that advantage.

Wonderful, isn't it? No matter what happens, the Republicans wind up hurting. I'm already feeling an epicaricacy tingle.

And I'm shuddering from schadenfreude at the thought...

We should be careful what we wish for. If Trump doesn't get the nomination, it will almost certainly go to Cruz. Cruz is an overt theocrat who surrounds himself with overt theocrats.

Read this, written by an expert on the American religious right:

Excerpt: "In early March, the Cruz for President campaign announced the formation of an official Religious Liberty Advisory Council. One of the members of Cruz' advisory council, Bishop Harry Jackson, appears to have the official power, through his participation in a major prophetic organization associated with the radical New Apostolic Reformation movement, to add new teachings to the Bible -- in a similar manner as Mormon prophet Joseph Smith's discovery of scripture that comprises the Book of Mormon which, for the Church of the Latter Day Saints, augments and completes the Bible."

NAR, the New Apostolic Reformation, originated the "Seven Mountains" strategy of "taking dominion" over all of the institutions of public life. They are more dangerous than you can possibly imagine.

Clinton vs. Cruz = uh-oh, we may have the fight of our lives on our hands. Take nothing for granted, and register as many new voters as you can.

Rubio has enough pledged delegates to get Trump 85. Rubio might go for Trump in return for a VP slot.

Then when Trump gets bored of being president and quits, then Rubio would be president. I think that is Rubio's best shot at becoming potus.

Trump may be 85 delegates short of a lock ..

..But he's definitely five beers short of a six pack! ;-)

G - I don't believe Clinton - unless indicted, and maybe not even then - will lose to a Dominionist if the debate moderators make any effort to do their job. Three questions could pretty well finish him. Most Christian Americans don't want what Ted Cruz wants.

Re. Jane @ 11: You're probably right. And I agree that most Christians find Dominionism to be extreme, heretical, and "not even wrong."

All I'm suggesting is, we should take nothing for granted, and we should participate in whatever get-out-the-vote activities exist in our areas. It's not enough to just win the presidency, we need to take back the Senate and aim for the House, and we need to deliver such a crushing blow to either Cruz or Trump as to send the clear message that America won't buy what they're selling. We need to bury the racism and the Dominionism for once and for all, and reaffirm our common values going forward.

Agreed on that. Though I will have to vote for Clinton with a clothespin on my nose.

Better the smell of a Democrat you don't prefer than the poisonous taste of a Republican "protest vote"...

We may not have the luxury of a particular Democratic candidate in an election where some literally have their lives depending on keeping the conservative candidates out of White House...

And given the realities of AGW, that may prove to be "everyone", not just "some". Before you cave to the temptation to "protest vote", consider well how many human beings it will kill, and how many species it will force into extinction.