How using the restroom may be harmful to fish 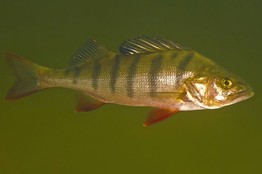 Trace amounts of oxazepam in rivers has large effects on wild perch. Image credit: Brent Christensen
Dr. Tomas Brodin (Umea University, Sweden) and colleagues have discovered that trace amounts of the drug oxazepam that ends up in rivers and streams (from toilets) greatly effects local fish. The drug is used to treat anxiety in humans and also calms fish. However, for wild perch, which normally hunt in schools, the antisocial effects of the drug in fish makes them more vulnerable to predation.
Psychiatric medications are not the only drugs found in potential drinking-water supplies. Researchers have also detected trace amounts of antibiotics and hormones, including contraceptives, in rivers and streams. According to federal regulators, there is no apparent harm to humans, although I am not sure if any controlled studies have been done to really test that claim. As this study shows, concentrations considered harmless to humans are certainly harmful to wildlife. In fact, the infected fish were found to have six times the concentration of ozazepam in their blood than the surrounding water.
Source:
Brodin T, Fick J, Jonsson M, Klaminder J. Dilute concentrations of a psychiatric drug alter behavior of fish from natural populations. Science 339(6121): 814-815, 2013. DOI: 10.1126/science.1226850
Tags
Life Science
Anxiety
drug
fish
oxazepam
river