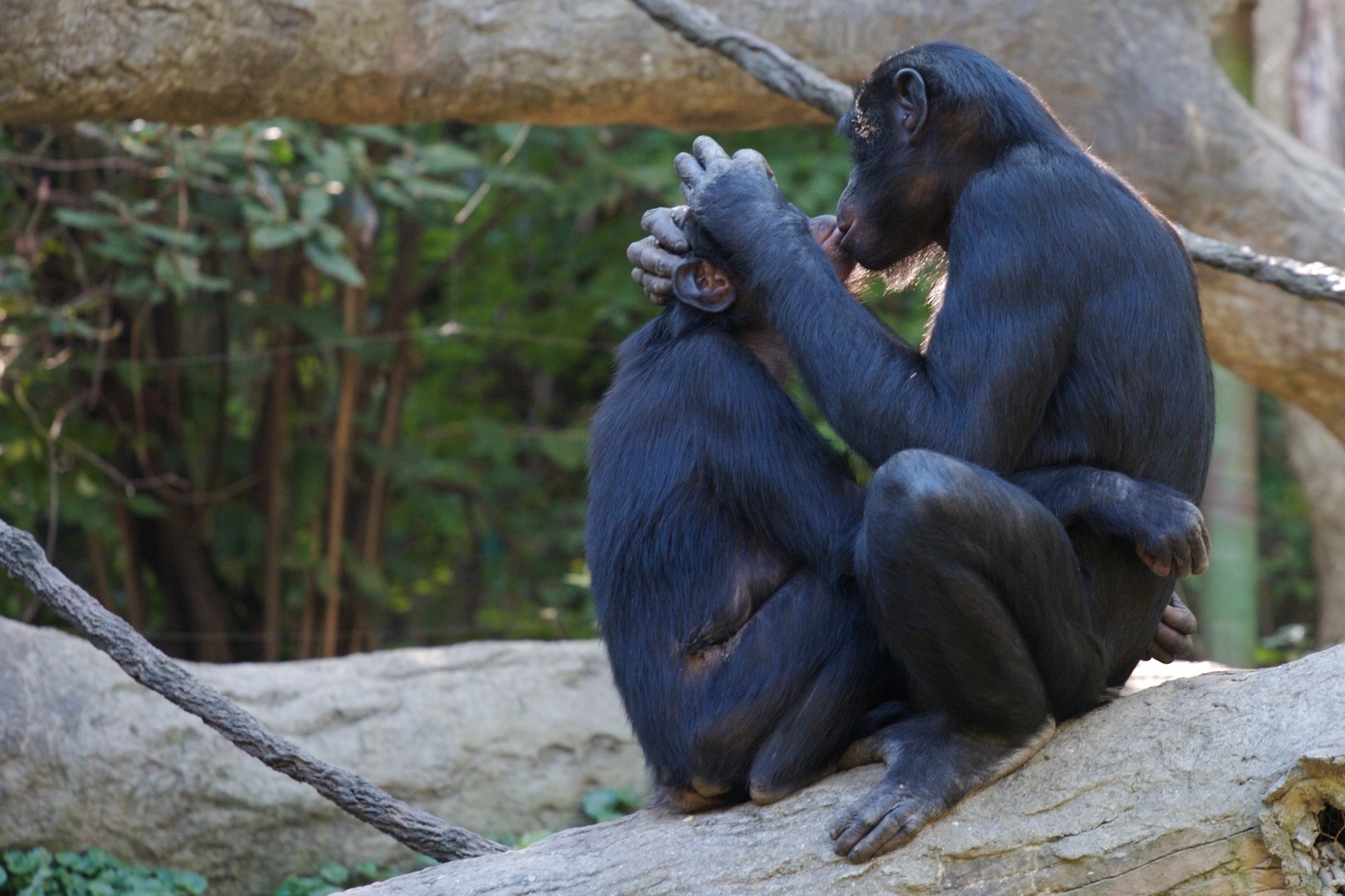 Image of bonobos from www.freewallpaperspot.com

Photographer Graham McGeorge has captured remarkable images of bonobos, our closest living relative that share 98.7% of human DNA. The photos depict bonobos engaging in similar behaviors as humans, like the image above from another photographer of bonobos embracing each other. McGeorge also captured images of bonobos caring for their young as well as a bonobo who lost his hair with advancing age. Truly a must-see!

Click here to view images from this touching display.

Except it's a bonobo. Field and Stream magazine, 'The World's Leading Outdoor Magazine' has published their 'Best of 2008: Sasquatch Trail Cam Photos.' Thing is, the runner-up submitted by Pete Morgan of Bradford, Pennsylvania looks awfully familiar to my pal science author Vanessa Woods and I.…

A few weeks ago I emailed Vanessa Woods and asked her pretty please if I could review her book. After reading all of the bonobo and chimpanzee papers written by Vanessa and her husband Brian Hare (both now at Duke) over the years, as well as their research on domesticated dogs and silver foxes (…

Vanessa Woods joins us from Your Inner Bonobo at Psychology Today. Vanessa is an award-winning journalist and author who studies the cognitive development of chimpanzees and bonobos at sanctuaries in the Republic of Congo and the Democratic Republic of Congo. Join Vanessa and other leading…

To get disclaimers out of the way, first, Vanessa Woods (on Twitter) is a friend. I first met her online, reading her blog Bonobo Handshake where she documented her day-to-day life and work with bonobos in the Congo. We met in person shortly after her arrival to North Carolina, at a blogger meetup…

If human population dynamics is essentially common to the propulation dynamics of other species and, consequently, if food supply is the independent not the dependent variable in the relationship between food and population, then a lot of what has been reported could be distractions that serve to dismiss rather than disclose vital but unwelcome science of what could somehow be real regarding the human population and, more importantly, why our behavior is so utterly destructive of everything we claim to be protecting and preserving. May I make a request? Could we focus now, here, on whether or not human exceptionalism applies to its population dynamics alone or is the dynamics of all species, including human beings, similar? Whatever your response, please make reference to scientific research that supports your point of view.

It seems to me that if we keep engaging in and hotly pursuing worldwide overproduction, overconsumption and overpopulation activities, distinctly human activities that cannot be sustained much longer on a planet with size, compostion and ecology of Earth, then the human species is a clear and present danger on our watch to future human well being, life as we know it, and environmental health. If we can see ourselves to be 'the problem', then it is incumbent upon us to bring forward the best available evidence from science, especially when that evidence happens to relate directly to why we are pursuing a soon to become, patently unsustainable (superhigh)way of life. A tip of the hat is due Rachel Carson for making me aware of the superhighway. Should humankind emerge from 'the bottleneck' E.O. Wilson imagines for us in the future and somehow escape the precipitation of our near-term extinction, how are those survivors to organize life sustainably and not repeat the mistakes we are making now... and have been making for a long time? Without knowledge of why we are doing what we are doing, every one of us is forever trapped in an eternal recurrence of unsustainable life cycles, I suppose.

We stand now where two roads diverge. But unlike the roads in Robert Frost's familiar poem, they are not equally fair. The road we have long been traveling is deceptively easy, a smooth superhighway on which we progress with great speed, but at its end lies disaster. The other fork of the road—the one "less traveled by"—offers our last, our only chance to reach a destination that assures the preservation of the earth.
Rachel Carson (1907 - 1964)

These are more amazing images of bonobos. Young bonobos are similar to young humans-they have similar mannerisms and once they reach adult stage become more relaxed.