The mystery of deformed frogs

Frog with an extra foot. Image from the Minnesota Pollution Control Agency. 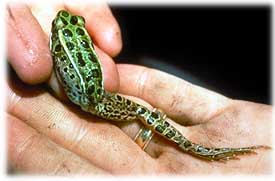 Image of a frog with a missing leg from the Minnesota Pollution Control Agency.

Since 1995 deformed frogs have been turning up. Call them the canaries in the coal mine for environmental health. Frogs are showing signs of some kind of stress.

So is it a parasite? Pollution? A natural phenomenon? Cannibalism? Fungus? Ultraviolet light? Something in the water?

The tap water data referred to in the video in which they placed embryos in tap water collected from different sites in Minnesota resulting in deformities was later deemed inconclusive upon review. To date, researchers are still debating about the cause of the deformities (MPRNews). More recent research in 2009 has shown that dragonfly nymphs and stickleback fish may be eating frogs legs. I hear they are pretty tasty (MinnPost).

The real answer is likely a combination of factors.

Deformed frogs go back to at least 1964, when I heard about them in my population biology course at Tulane University. Maybe the South was ahead of the North on this phenomenon.

True. Thank you for pointing that out. What I meant to say was that in 1995 they started turning up in large numbers in Minnesota, attracting national attention to the issue.

This was a very interesting article to find. As a student at West Virginia University studying biology, I have recently studied about the large decline in amphibians, something that I was previously unaware of. Currently 48% of amphibians are threatened, and many species have gone extinct in the past 30 years. This is a much larger threat than to any other group of animals. In the video provided, it is mentioned that frogs (and other amphibians) are a good way to determine how healthy an environment is, as was discussed in my class. The video described that possible threats may be predators, UV light, or water pollution. I was very interesting to find the studies shown in this report pointed towards water pollution being the main contributor in the deformities in frogs. It shows that more than one major factor may be acting on frogs detrimentally. In the video posted, it was stated that UV light had caused some deformities in the frogs as well, a fact that supports the information I have previously studied. Ultra Violet light was a strong component studied in class in relation to the decline of amphibians. It was found that amphibian eggs incubating on water were exposed highly to UV radiation, and caused some of the eggs to never hatch (Ambient Ultra Violet Radiation Causes Mortality in Salamander Eggs, Blaustein 1995). I also found it interesting that in the literature I have studied, the years of these initial findings were around the mid-90s. Although it is not clear exactly what is causing the global decrease of amphibians, it is clear that it is a serious problem that deserves attention. From the evidence discovered thus far, many factors could be working against them and if precautions aren't taken soon, there may not be any amphibians left.