Congratulations to Nicolle Domnik, this year's winner of the new Dr. Dolittle Travel Award to present her research at the annual Experimental Biology conference in San Diego, CA in April. Nicolle is currently a graduate student in the Department of Biomedical and Molecular Sciences at Queen's University in Canada. The award criteria included the submission of a guest blog entry based on the research she will be presenting at the Experimental Biology conference (N Domnik, SG Vincent, E Cutz, JT Fisher. Murine airway slowly-adapting receptor responses to lung inflation: A role for serotonin? 2014 Experimental Biology, San Diego, CA).

Here is her winning blog entry:

The nerves that run from our respiratory system – our lungs and airways – to our brain play an important role in regulating how we breathe, both in health, as well as in conditions of stress or disease. A sort of two-way street, or feedback system, the central nervous system – including our brain – receives important information about what’s happening in our respiratory system (What is the composition of the air we’re breathing? Are we getting enough oxygen, or producing too much carbon dioxide? Is there something else in the air that we react to? How much air, as measured by changes in pressure, is in our lungs?...) via “afferent” nerves. This information is then used to send messages back to the respiratory system (via “efferent” nerves) to ensure optimal function (Increase your breathing if you’re building up excess carbon dioxide, as happens during exercise. Cough if there’s an irritant. Stop breathing in – and start breathing out – once you reach a certain lung volume and pressure.).

While our understanding of how the lungs work is significantly more detailed than even in the recent past, many important questions – especially as pertain to changes in normal function that can contribute to or cause disease – remain unanswered. One such area of respiratory science that remains somewhat unexplored concerns a type of cell called the Pulmonary Neuroendocrine Cell (PNEC), or, when found in clusters, Neuroendocrine Bodies (NEBs). These unique cells, which closely interact with nerves, are the first cell type to mature in the lung during development, and have, through extensive use of visualization (such as various types of microscopy) and cellular (such as cell culture) methods, been shown to produce cellular receptors and proteins which indicate that they may play a role in sensing oxygen levels, carbon dioxide levels, and mechanical forces (such as stretch, during breathing) in the lung. Interestingly, these cells are highly conserved throughout evolution and are found in organisms as diverse as fish (located in the gills), birds, reptiles, amphibians, and mammals – from rodents through to humans. Known to play an important role in lung maturation, they are also believed to harbor a stem cell niche for lung repair in adulthood. As they are mature at birth, whereas the primary oxygen sensor in adults – the carotid body – does not mature until after birth, it is believed that these cells might also be critical oxygen-sensors in the period immediately surrounding birth. Changes in these cells (increase or decreases in number or size, or changes in appearance) in various diseases, including Sudden Infant Death Syndrome (SIDS), further emphasize the importance of understanding their role within the respiratory system. 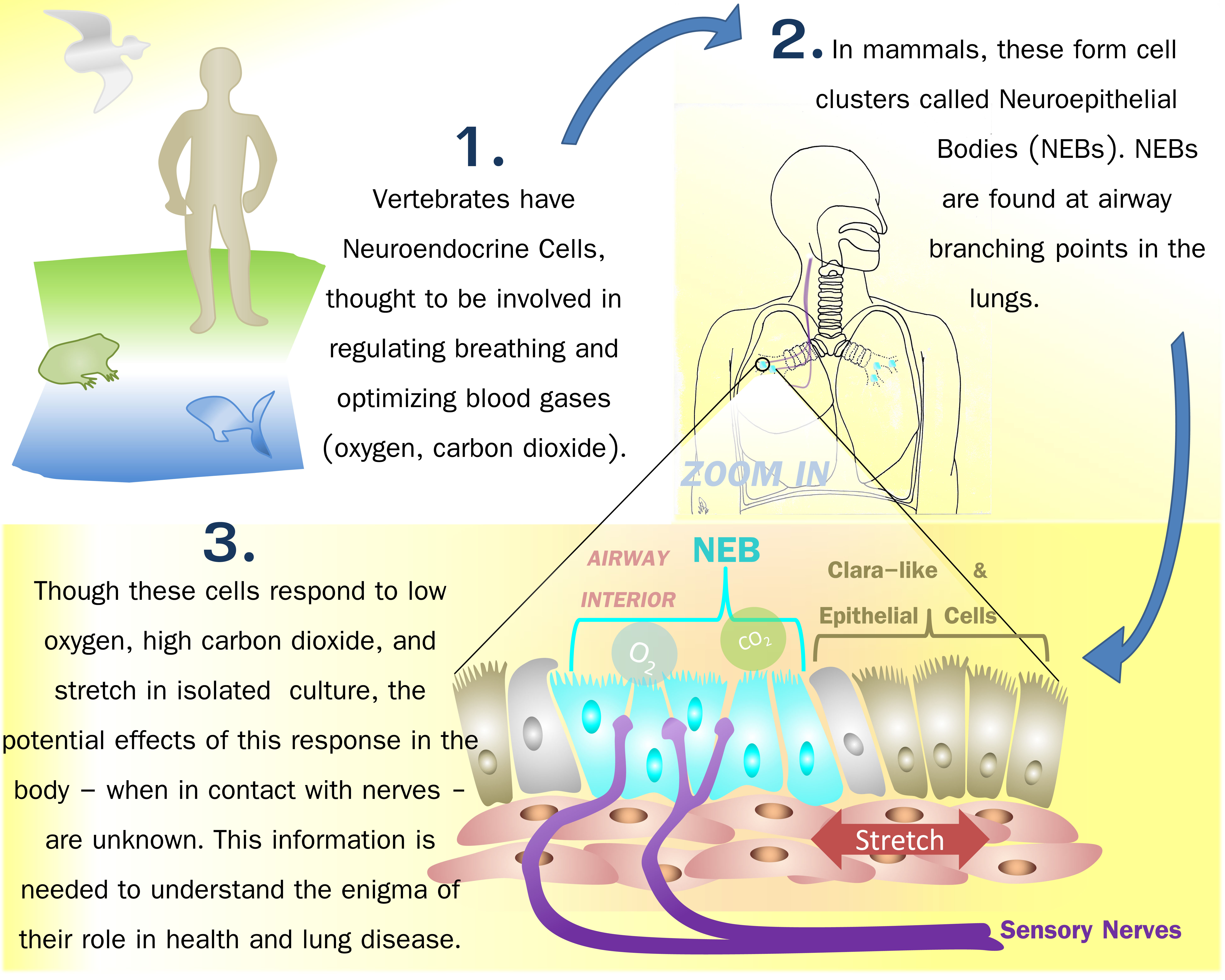 Despite our knowledge, a functional role for these cells has yet to be clearly demonstrated. Thus, we addressed the hypothesis that NEBs are linked with mechanosensitive (capable of sensing changes in airway pressure, or stretch) nerves. This was done by recording the activity of known mechanosensitive nerves (measuring their “action potentials” – or the electric impulses indicative of nervous system activity) during slow, sustained lung inflations similar to a deep inhalation and ~ 10 second breath-hold. This was done during both “naïve” conditions, as well as in the presence of a serotonin (5-HT) type 3 (5-HT3) receptor blocking drug, Tropisetron (which is used clinically to treat nausea, for example in chemotherapy patients). NEBs are known to produce 5-HT, and it has been suggested that 5-HT might be the molecule used by NEBs to communicate with the nerves in their immediate vicinity. In such a case, blocking the 5-HT3 receptor should decrease the usual response of these nerves to mechanical stretch.

We found that, at the level of single nerve fibers, blocking the 5-HT3 receptors caused a modest decrease in the amount of action potential firing normally seen during inflation and breath-hold. These findings suggest that 5-HT may be involved in sensing mechanical changes in the lungs, and indirectly suggest that this signal is altered by the 5-HT3 receptor and may be linked to 5-HT-producing NEBs. These experiments are an important first step in discovering the functional role of these unique cells in vivo, and how they go about playing that role – knowledge that is integral to ultimately understanding their larger role in mediating health and disease.