Like Aesop's fable, rats have another reason to be envious of elephants. Elephants also have significantly more genes that can detect different smells (i.e. olfactory receptor genes) than other super-sniffers like rats and dogs. In fact, compared to 13 other species, African elephants have 1,948 genes related to smell putting them ahead of the previous record holder, rats that only have about half as many genes. Primates have much fewer with only 296-396 of these olfactory receptor genes. Interestingly, the common ancestor of mammals had 781 olfactory genes, meaning that primates have lost genes whereas rats and elephants have increased their variety over time.

This super-sniffing sense likely evolved as a defense mechanism as prior studies have shown that African elephants can tell the difference between two tribes in Kenya by their smell, sight and the sounds of their voices as reported in a prior blog. This evolutionary advantage helps them to avoid the Maasai tribe that is known for spearing elephants and the Kamba tribe that generally leave them alone. The super sniffing senses also help locate food.

Despite this super-sense, I do not think that the police force will be replacing their dogs with elephants any time soon. Could you imagine?! 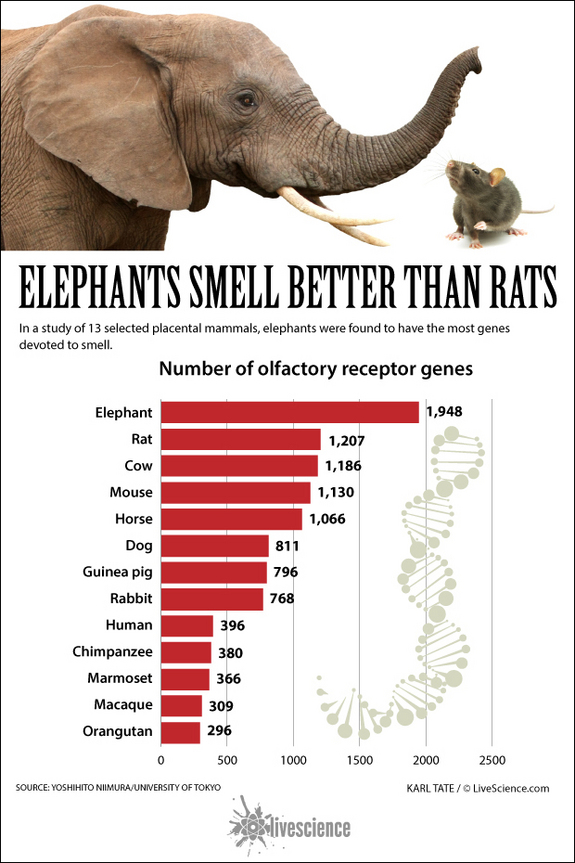