Why big animals do not have higher cancer risks 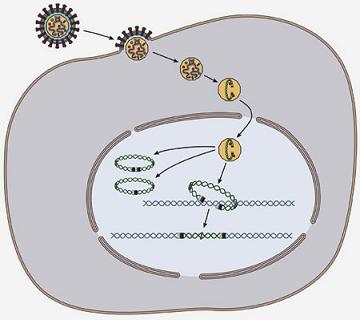 Depiction of a retrovirus integrating its DNA into the DNA of the host cell. Image from: http://bit.ly/1phzpbR

I read an interesting article in Scientific American that discussed the so-called Peto's Paradox. Dr. Richard Peto (University of Oxford) came up with the idea that if every cell has an equal probability of becoming cancerous, then larger animals would be predicted to develop cancer at higher rates than smaller animals. As it turns out, it is not that simple. All mammals exhibit similar cancer rates, with some exceptions. This is what came to be known as Peto's Paradox.

Some researchers suggested that perhaps smaller animals developed more oxidative stress as a result of having higher metabolisms. Others proposed that perhaps larger animals have more genes that suppress tumors.

Dr. Aris Katzourakis (Evolutionary Biologist, University of Oxford) has come up with a new hypothesis in which the ability for an animal to suppress viral infections in their DNA may offer at least a partial explanation for the paradox. Endogenous retroviruses can lead to cancer by causing mutations in the region of the genome where they insert their own DNA (see diagram above). About 5-10% of the vertebrate genome is comprised of these endogenous retroviruses (mostly inactive) that have evolved with mammals. Dr. Katzourakis evaluated the integration of these retroviruses in 38 species of mammals and found that larger mammals have fewer endogenous retroviruses in their genome than smaller animals (humans have about 348 whereas mice have 3,331). He thinks that the fewer retroviruses present in  larger animals may offer some protection from cancer.

I found this article really interesting.

interesting, C. elegans only has ~<20 ERVs in it's genome. and what <1000 cells in it's adult body. guess the trend doesn't hold in nematodes???

I found this article really interesting.