Discovery of fish living UNDER 740 meters of ice! 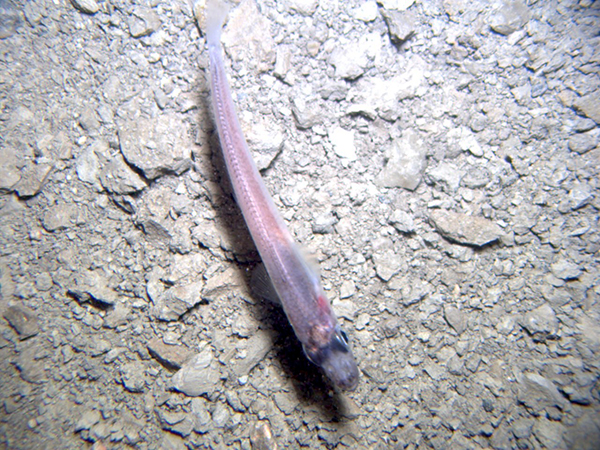 An unexpected find and very exciting moment for researchers exploring what lies beneath 740 meters of ice in Antarctica...fish! An amazing find given the perpetual darkness and cold.

In an expedition sponsored by the National Science Foundation, scientists and ice drillers bored a hole through the Ross Ice Shelf near the coast of Antarctica, 850 kilometers from the closest place where there is sunlight. The area is known as the grounding zone, which is in essence a subglacial beach. According to a quote from glacial geologist Ross Powell (Northern Illinois University) published in Scientific American, “I’m surprised. I’ve worked in this area for my whole career. You get the picture of these areas having very little food, being desolate, not supporting much life.”

During their 20 hour observation, the research team saw 20-30 of the fish shown in the image above (approximately the size of a butter knife) in addition to two types of smaller fish, a black one and an orange one. They also discovered amphipods (related to shrimp) and other marine invertebrates they have yet to describe. Samples of the seawater showed very little life in the way of microbes. You have to imagine that other sea life would consume much of the plankton before it reached this spot, over the course of 6-7 years based on estimates. The sea floor did not contain any mud-dwelling creatures or anything that would be considered very nutritious. Rather, what was discovered were several different animal species that could move around to find food.

It is possible that animals living in under the glacier use chemical energy, such as minerals from the ice, ammonium, methane, etc from the Earth instead of sunlight for energy. Bacteria are known to use alternate energy sources such as these and may serve as food for the crustaceans which could then serve as food for the fishes, according to Dr. Arthur DeVries a Comparative Physiologist at the Univerity of Illinois at Urbana-Champaign who was not involved in the expedition. Moreover, fishes may feed on the offspring of other fishes. Of note, Dr. DeVries is also this year's Krogh Distinguished lecturer, which is awarded by the Comparative and Evolutionary Physiology section of the American Physiological Society at the upcoming Experimental Biology conference in Boston. I can't wait to hear his seminar!

A string containing sensors was also lowered into another hole by Dr. Slawek Tulaczyk (University of California-Santa Cruz) with the goal of measuring temperatures within the ice and water at varying heights, tidal flows, the flow of subglacial rivers, as well as the flexing of the ice that occurs with the tides. The purpose of these measurements is to measure the amount of heat and mechanical stress occurring in this part of the glacier in an effort to understand how involved glaciers from this area are in the rising sea levels.

What I want to know is why do these fish still have seemingly normal looking eyes? Fish living in darkness are sometimes blind. Perhaps these fish are newcomers to the area? Perhaps they have adapted the ability to see in the dark somehow? These fish must also produce anti-freeze proteins like other cold-adapted fish. Without a live specimen, we may have to continue guessing. Fascinating!

It's really fascinating what nature can do. And have you heard that fish also was found in the Mariana trench at at depth 26,722 feet? That is also incredible. Also I've found some extra info at the Assignment Mountain

Do bioluminescent organisms figure in the under-ice ecotreme?

it the beauty and greatest of hoe nature is and I would really like to know even more concerning that fish, how unique is it
u15058396

Wow, truly amazing. I agree with you, Assignment Mountain, nature is very atistic if I may say.
Russell Seitz, I do not think bioluminescence is very necessary for organisms that live deep underwate, or under-ice. My reason is, some organisms feed on other microscopic organisms, thus they have no need for bioluminescence, others use traps and baits that may include bioluminescent devices to attract prey organisms.
What I would also like to note is the transparency of the fish's skin, what caused this? I believe this is due to the absence of light, thus there is no need for skin pigmentation.
-u15159982

Truly nature at its best. Who would have thought this possible? I wonder what surprise nature has in store next...
u15085504

This incredible aquatic animals living in perpetual darkness and cold, beneath a roof of ice 740 meters thick. The animals inhabit a wedge of seawater only 10 meters deep, sealed between the ice above and a barren, rocky seafloor below—a location so remote and hostile the many scientists expected to find nothing but scant microbial life.
Dissertation Writing Service UK - Peak Dissertation

I understand the mystery of food,the questionable part is difference in temperature.how on earth can that happen?i guess a new has evolve.

It is fascinating to think that to this day humans have only explored one sixteenth of the worlds ocean. Just imagine what else lurks out there and what other amazing organisms have developed without us even knowing. My question is though, they say that these fish are able to survive on chemical energy, so why don't scientists look into how the fish utilize the chemical energy and use the knowledge to help humans find a sustainable energy source by using natural chemicals?

It is fascinating to think that to this day humans have only explored one sixteenth of the worlds ocean. Just imagine what else lurks out there and what other amazing organisms have developed without us even knowing. My question is though, they say that these fish are able to survive on chemical energy, so why don’t scientists look into how the fish utilize the chemical energy and use the knowledge to help humans find a sustainable energy source by using natural chemicals?
u15026397

This is a true reflection of the fact that animals are able to adapt to their environment despite of extreme environmental factors which, in this case is temperature.

I am amazed at how big they are, approximately as big as a butter knife. I would rather have assumed that they would be very small. I hope they could possible find out how old these fish can get.

It must be a very harsh environment to live. I’m curious to see whether the microbiologists will figure out what chemicals actually nourish the spooky ecosystem. It’s amazing how nature can still surprise us.
Dr. Dolittle, your blog is by far my favourite.

I assumed, just as the scientists did, that only microbes would be able to live in such extreme temperatures. After reading that they surprisingly found several different animal species living in these extremely cold conditions, I started wondering about the possibilities of finding life in extremely hot temperatures, for example in the core of a volcano. I spent some time reading about it and found that there is no answer for that question yet, however it is being researched. I think the results will be mind blowing.

It must be a very harsh environment to live. I’m curious to see whether the microbiologists will figure out what chemicals actually nourish this spooky ecosystem. It’s amazing how nature still surprises us.

It must be a very harsh environment to live. I am curious to see whether the mircrobiologists will figure out what chemicals actually nourish this spooky ecosystem. It is amazing how nature still surprises us.

Spooky indeed Konrad! I wonder how old those fish are. They should definitely try to capture a specimen.

Van der walt, M, that truly is amaizing to think about. I do doubt thought that such life exists: in the core of a volcano. My reason is, the basic unit of life, a cell, cannot thrive in such temperatures, thus I believe organisms in the core of a volcano might be possible, but those organisms would most definitely not be built from cells, especially not the ones we know of, or existing currently. It is just like imagining life on the surface of our sun! Time will tell.

It amazes me how nature can adapt so easily to the environment . As some of the previous comments suggested it's very possible that he fish species just recently started to live there.
Like Dr. Dolittle pointed out, I am very curious as to how the fish can see in the dark under the water when the fish still has seemingly normal looking eyes?

"An unexpected find", words used to describe Mother natures' superiority really, it is indeed an unexpected find for signs of life to be found in environments so harsh. Humans have been focused on finding other worlds and life forms in outer space, but i believe we should first focus on the untouched parts of this vast and diverse earth for I believe more "unexpected finds" await us.

We are well aware of the rich fish life in the higher latitudes, even under ice caps, as is often illustrated by the Inuit boring fishing holes - one would expect that the thickness of the ice would have little effect, neither should the cold, but what feeds these fish in this barren environment? Even should there be sufficient volumes of micro-organisms, in the absence of tectonic vents, which chemicals could possibly feed these? Could nutrients be flowing down the glaciers from above the surface?

I find it extremely fascinating that these fish can live on so little I am anxiously awaiting more research that shall arise from this topic.

M.Bester mentioned his curiosity as to how the fish see in the dark, I would also like to express curiosity as to what other organisms live at these depths and what structural features do they have that help them survive their very hostile environment.