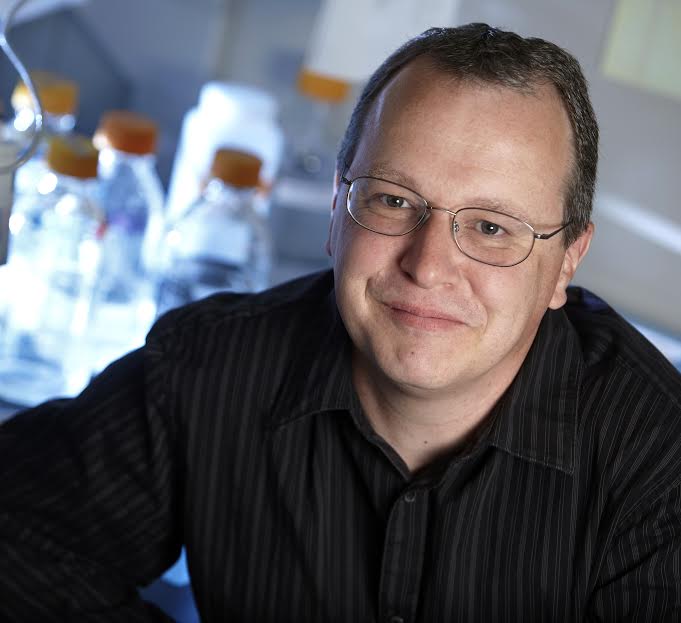 Dr. Frank van Breukelen is an Associate Professor in the School of Life Sciences at the University of Nevada, Las Vegas. He was invited to tell us about a new research project in this laboratory about some really cool mammals called tenrecs.

In a recent post, Dr. Dolittle mentioned a talk that we gave at the Experimental Biology meetings in Boston. We discussed some of our recent data on tenrecs in a symposium about physiological plasticity- the ability of an animal to change its physiology in response to changes in the environment. We’ve had the tenrecs for less than a year but we’re finding suggests that they may one of the most plastic mammals ever investigated.

Tenrecs are a group of ~35 species and all but 3 of these species lives in Madagascar. Tenrecs are Afrotherians meaning that they’re related to such diverse mammals as elephants, manatees, and aardvarks. They share features with what we suspect is our earliest placental mammals. They even have a cloaca- a single urogenital opening like reptiles, amphibians, birds, and fishes. The only other mammals to have a cloaca are the monotremes- the egg laying mammals like the platypus or echidna. There’s tremendous diversity in tenrecs. Some look like hedgehogs, rats, mice, shrews, otters, and others are just really bizarre looking like the streaked tenrecs. We work with common tenrecs (Tenrec ecaudatus). A colleague, Dr. Barry Lovegrove of South Africa, published a paper in 2014 that demonstrated that unlike every other known small hibernator, this particular species of tenrec does not periodically arouse from hibernation. Most of my work is on mammalian hibernation using ground squirrels. Torpor is the depressed metabolic state of hibernation. Ground squirrels go into torpor and core body temperatures can go to as low as -2.9 °C e.g. below the freezing point of water. But these squirrels arouse every one to three weeks and maintain a body temperature of 36 °C for 12-20 h before going back into torpor. Soil temperatures in Madagascar are much warmer and where Barry and his students did their work, the coldest temperatures were above 20 °C. Based on all of our previous work, we thought that if we cooled tenrecs down, they’d have to arouse from torpor. 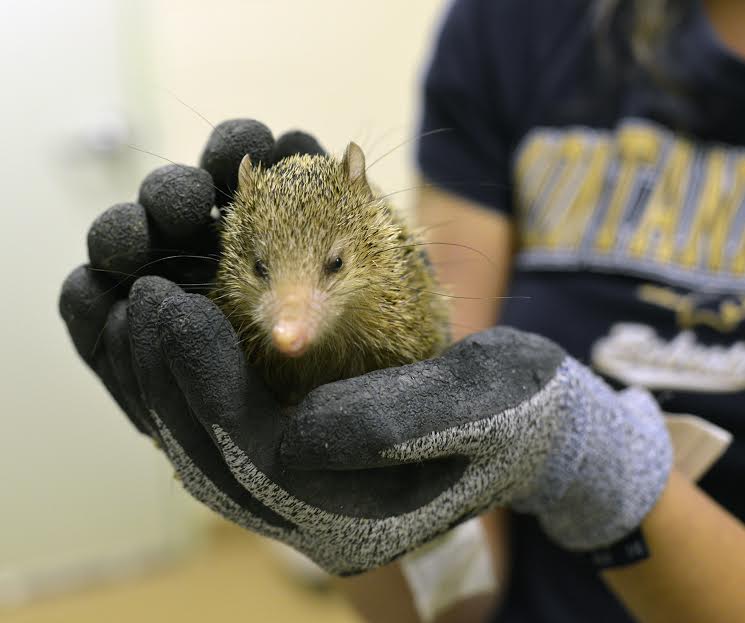 Our data suggest that they may be doing what we call the plesiomorphic (evolutionarily ancestral) form of hibernation. There are enormous mismatches in processes that we always thought were linked. For instance, we see large changes in heart rate with half the change in oxygen consumption. Such differences would suggest major problems with maintaining homeostasis (the idea of keeping a relatively constant internal environment). There are no hard data for hibernating tenrecs, but we know that in ground squirrels as many as 20-50% of adult squirrels and as many as 70% of juvenile squirrels may die each winter during hibernation. In other words, hibernation is tough on squirrels. We think it’s even tougher on tenrecs but only time and data will tell that tale. 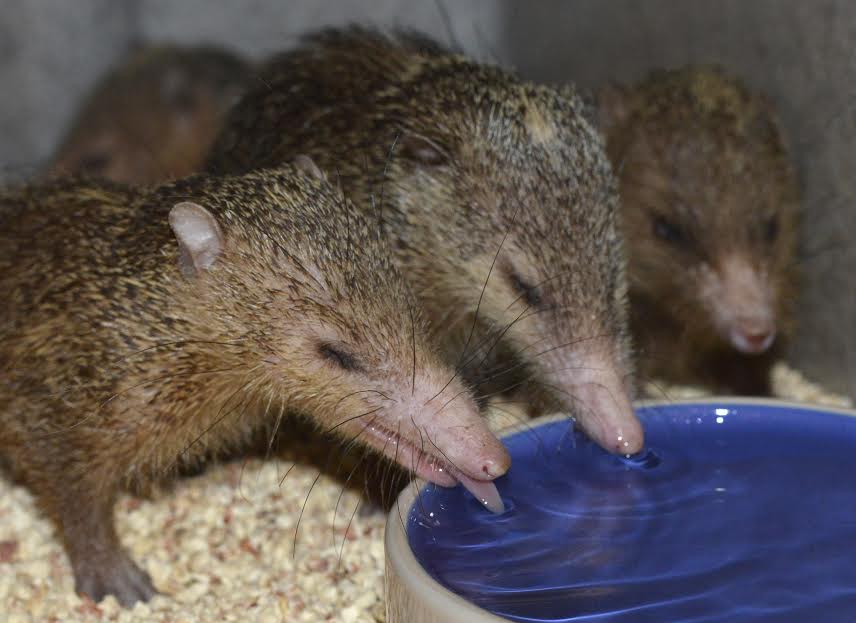 Tenrecs came out of hibernation at very different times. Animals gradually become more and more active over the course of weeks. Ground squirrels don’t do this and another colleague of mine could tell you within days of when his squirrels will emerge from their burrows each year. Our tenrecs came out of hibernation as early as August and as late as December. They ate enormous amounts. Even though many weighed less than 250 g in August, they would gain 20-30 g per day with one tenrec actually gaining >50 g in a day. This even happened in adults! That growth plasticity is very unusual in mammals.
Reproduction in tenrecs is really bizarre. T. ecaudatus have been reported to have litters of up to 32 babies. Our litters were not that big but we still found some crazy stuff. Baby tenrecs will eat from their mother’s mouth within the first week of life. Some of our baby tenrecs grew to adult size (over 400 g) in less than 5 weeks! Baby tenrecs can communicate by stridulation where they rub their spines together.
What was most interesting for us was that these tenrecs have variable body temperature. When we house tenrecs at low ambient temperature like 12 °C, some tenrecs defended their body temperature between ~28 and 32 °C. Others let their body temperature oscillate [see figure below]. When a tenrec had a body temperature of 14 °C, they were still active and able to run. Even more crazy was that the next day, an animal that was defending its body temperature could be oscillating and vice versa. On top of it all, we had animals during the active season that could go into torpor at any temperature from 12-28 °C. Their body temperature would be near ambient and their oxygen consumption would be very low. 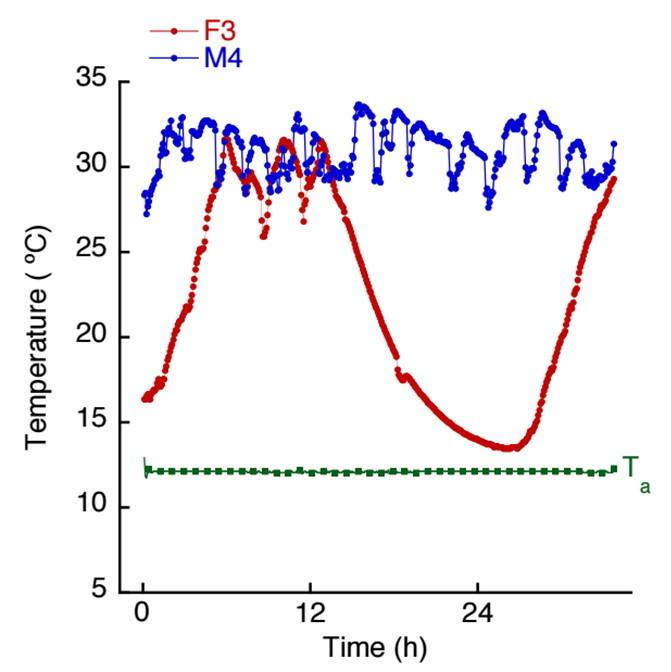 Some of our tenrecs are already hibernating for the season and others are not. We’re working to try and understand the energetics of hibernation and the role of protein metabolism during hibernation. Since the tenrecs have variable body temperature, we can directly test some of the major hypotheses for the evolution of endothermy and homeothermy (warm-bloodedness).