Monday was a great day for comparative physiology at EB! I saw several highly notable posters and seminars that I would like to share with you: 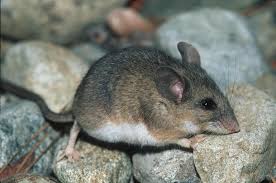 Image of a deer mouse from www.calphotos.berkeley.edu

Catherine Ivy, graduate student at McMaster University compared deer mice that were raised at high altitudes versus those raised at lower altitudes and found that the ancestry of the animals was actually important in regulation of breathing and gas exchange in the lungs. Perhaps not surprisingly, acclimation to hypoxia also influenced both variables as well.

Image of a guinea pig from Wikipedia

Alice Nakasone, undergraduate student at Barry University (Miami Shores, FL) taught me that mice do not cough! Therefore, her research on regulation of coughing focuses on guinea pigs, which are able to cough. 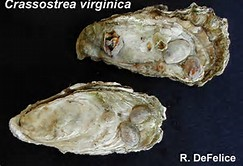 Image of a bivalve from www.uniprot.org

Ave Harris, undergraduate student at Medgar Evers College presented data showing how histamine (you know the molecule that is at the root of allergic reactions and the reason for taking antihistamines), is involved in sensory reception in the gills of a bivalve (Crassostrea virginica; image above from uniprot.org).

Image of a tenrec from Wikipedia

Brandy Cahoon, University of Nevada, Las Vegas spoke about how tenrecs (shown above, from Madagascar) have brown adipose tissue and do not regulate their body temperatures as closely as other cold-adapted species. In fact, their body temperature tends to track the ambient (i.e. atmospheric) temperature. Since brown adipose tissue is thought to have evolved in hot, as opposed to cold, environments this thermoregulatory tissue might be important for reproduction, not just hibernation.

The annual business dinner meeting was also Monday night at the NoName Restaurant in Boston, MA where the food was amazing (lobster, clams and scallops-yum!). It was impressive to see so many young comparative physiologists receive awards for their research! I hope to acquire some photos and share some information about each of them with you very soon.

Is this brown adipose tissue the cause of certain species hibernating and thus do most hibernating mammals also possess this tissue? Or is it simply unique to the tenrecs?

These spiders are incredibly, and surprisingly, beautiful! It is very interesting to think that these tiny, beautiful spiders also have a mating dance. Their bright Colours make me curious as to whether or not they are poisonous to predators to ingest? And also whether they are venomous? How do they defend themselves?

It is always wonderful to hear good news about young people taking up different kinds of science based research. Congratulations to all the participants. I look forward to reading more on this topic especially on how colour and size plays a major role in terms of how different species adapt to their environment and also if their longevity is dependent on these factors.

Several sites on the Internet say mice can cough. Scientists at the Guangzhou Medical College in China claim to have confirmed this statement by exposing 40 mice to mists of capsaicin and examining their reaction to the substance with a plethysmograph and tiny microphones. Still, other sources oppose this statement, saying that the response is just expiration. So if mice can't cough, how will they be able to remove irritants from their airways and lungs?
(u15014097)

According to Harris A and other authors in the meeting abstract of the society of intergrative an comparative biology(www.sicb.org), histamine is rarely found to mediate physiologic functions in gills of bivalves. can we use this as sustainable information for the development or evolution of bivalve species.

According to the meeting abstract from the annual meeting of the SICB(WWW.SICB.org), HIS-Histamine is rarely found to mediate physiologic functions in gills of bivalves. can we still use the information presented above to conclude that HIS might have contributed to the development of bivalves also considering genetic variation?

If mice do not cough, how is it possible for them to get rid of obstructions that may be in their airway? u15001548

I recently read an article that mice do actually cough. Scientists at Guangzhou Medical College in China exposed mice to capsaisin and were then placed in a machine. With the help of mini-microphones, sounds of tapping teeth and sniffing were heard. So they interestingly do cough.

I'm guessing Alice Nakasone, undergraduate student at Barry University has done some research and has probably countered the arguments that have previously been confirmed?
15022219

It is very interesting to read about the differences that occur in the some mice species, namely deer mice. These differences are a result of the mice adapting to different altitudes. Would this be seen as evolution of the deer mice?

As I questioned earlier oft the results of the deer mouse study is, my question is, is there basically a difference in their lungs or are both lungs the same, is it just the red blood cell number that differ. ( u15009662)

could mice that acclimatize at high altitudes which has more red blood sells for maximum oxygen absorbency be genetically altered to stay like that even when they have a long duration of stay at low altitudes?
u15169988

Usually Coughing is caused by the irritation of the throat, airways or the lungs. If mice do not cough how do they deal with this irritations? is their regulation better then that of coughing animals?

wow amazing. i know that coughing is caused by irritations on the throat and lungs. how do these mice deal with this irritations?

This blog is very interesting. Learning about how mice differ in high and low altitudes and learning that the tissue of the tenrecs is important for reproduction. As these creatures temperature tends to track the ambient, what would happen if these creatures where to be taken out of their habitat and placed in a colder environment?

This blog is amazing. If tenrecs's body temperature tend to track ambient, what would happen if these creatures where to be removed from their warm habitat and placed in a cold environment from birth?

I find this blog enthralling. What role does the thermoregulatory tissue play in the reproduction of the tenrec?
U15099785

can human beings also acquire these pigments that prevents the mice not to cough during throat and lungs irritations by some kind of evolution in the future since our climate changes and the change in the environment , which may change characteristics in your bodies?

Is this something that is evolution based with mice,environmental based or naturally they all cannot cough because i have read somewhere on internet that mice have had a way of coughing.

Interesting discoveries although not enough information is displayed to us... My question is: If two deer mouses of different sex are raised in different altitudes what kind of offspring can we expect from the two? Does it affect the offspring's fertility?