Back by popular demand: the Venezuelan poodle moth

It is hard to believe that I have been sharing my passion for comparative physiology and its application to human and animal health with you for over 7 years now! In reminiscing over the last 7 years, I thought it would be fun to look back at the most popular posts. So, here goes...

The most popular blog post since 2010 featured the adorable Venezuelan poodle moth...

I was browsing through The Scientist and came across this image of a Venezuelan poodle moth that I could not resist sharing:

Image by: Arthur Anker on flickr. What is interesting about this particular moth is that scientists are trying to figure out what type of moth it is (its phylogeny).

The flickr website by Dr. Arthur Anker, a Zoologist, contains photos of numerous other beautiful butterflies and moths.

Leucanella maasseni, which looks like it could be related to batman (from this view at least):

My new favorite though, is the chicken worm caterpillar: 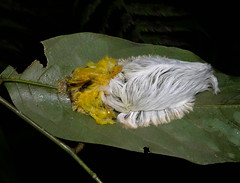