SteelyKid takes a bunch of enrichment classes at her day care, none of which are explicitly science. I was, however, thrilled to discover that they were doing actual science in her computer class though. The "Featured Image" at the top of this post (sorry, RSS readers, you'll need to click through) is a cell-phone picture of the worksheet she brought home the other day. Apparently, they made a computer-controlled Lego robot to kick a ball, and measured its performance, as recorded in the table in the picture (keep in mind, she's 4.75 years old, so some letters and numbers occasionally undergo parity reversal).

The great part of this is that the table includes not only the final result of the experiment (which is, of course, the ultimate arbiter of reality), but also a prediction of the expected range. It's not entirely clear to me how those predictions were made-- we haven't talked about Newton's Laws and projectile kinematics just yet-- and the bottom one is actually a retrodiction, added in the evening after I asked why that one was blank ("I forgot to write that one down..."). But still: SCIENCE! Predictions tested by experiment! I love it.

I'm still behind where I need to be after last week's indeterminate stomach difficulty for The Pip, so this is all the blogging I have time for today. But as a bonus, here's a composite photo of both kids from a week or so ago, showing that SteelyKid talks with her hands just like her dad, and The Pip is a Little Dude on the go. 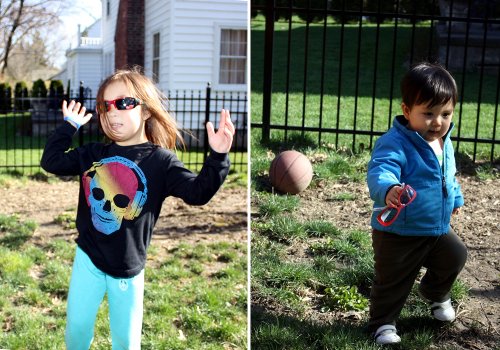 ...and The Pip will be five. Happy birthday, Little Dude! Oh, yeah, there was also some kind of election. In which a bunch of crazy people lost, and a guy I played rugby with was elected a US Senator. Which is a great way to celebrate the one-year anniversary of this momentous occasion. And here's…

Thursday was a travel day, the less said about which the better. So, while I do have a couple of cell-phone snaps from the day, I'm just going to ignore it, and give you two better photos from Friday and Saturday. These go nicely together, as you can see in the composite that's the "featured image…

WordPress's upload is broken, so here's a link to the photo: SteelyKid and The Pip. February was... not a good month, in a lot of ways. Let's leave it at that. One of the unfortunate consequences of this was that I went just about the entire month without even taking any pictures of the kids, let…
Advertisment