It's a big week in Chateau Steelypips for martial arts and cute-kid photos. On the heels of SteelyKid's first competition this past weekend, we have the Pip's first belt test tonight (and SteelyKid is testing for her brown belt Wednesday, so you should probably expect one more kid-martial-arts photo before all's said and done...).

Tonight's test was for the "Little Dragons" class for 3-4-5-year olds, and was kind of hilarious. There was a lot of enthusiasm, but also a good deal of fuzziness on the difference between "right" and "left," and their interpretation of push-ups was simply indescribable. The kids all kicked and punched pads with great enthusiasm (even the kid whose kihap on kicks was "OUCH!"), and they all got to break a board.

So here's The Pip with his new accessories: 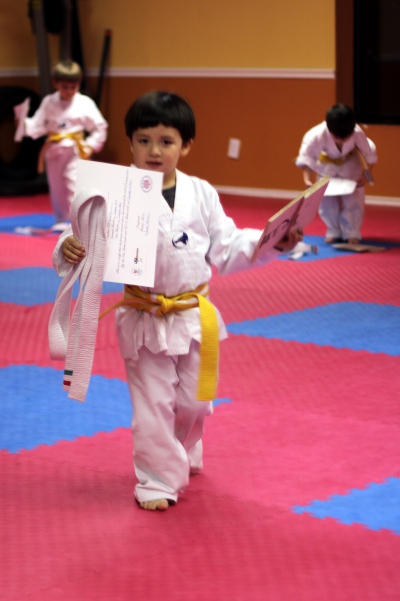 The Pip with his new belt, his certificate, and the board he broke during his belt test.

And here he is getting congratulated by Master Tocco: 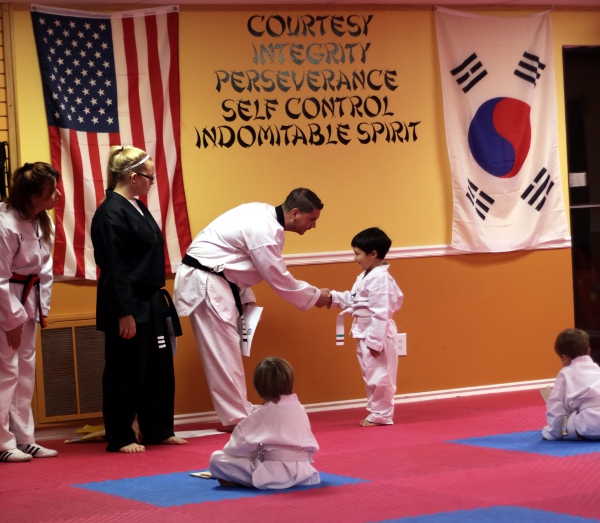 The Pip getting his new belt at taekwondo.

And it's on to Wednesday and SteelyKid's much more intense test...

Does Hidy Ochai (sp?) still have a school up there?