Two years ago, as of 4:35 this morning, The Pip was born. And now he's a great big toddler, obsessed with pirates and dinosaurs, running everywhere and talking a LOT...

He's had a bit of a rough week, with another flare-up of conjunctivitis in his right eye, requiring eye ointment and antibiotics, the less said about the administration of which, the better. He's a remarkably cheerful Little Dude by nature, though, and is all smiles and giggles mere minutes after the screaming stops.

His main birthday gift is going to be a big-kid bed, just like his sister's, that's supposed to be delivered in an hour or so. This will be Very Exciting for all of us, and hopefully he'll adjust to the new bedtime routine quickly... Yet another major milestone in his development, though.

So, happy birthday to the dude-liest Little Dude we know! 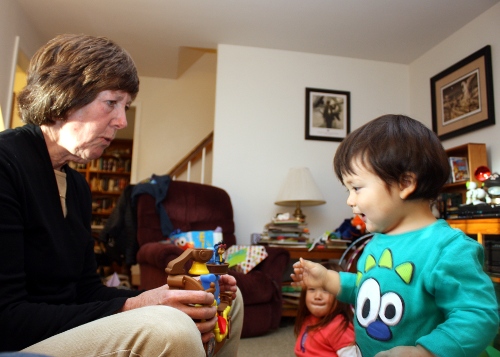 The Pip and Grandma playing with a Jake and the Never Land Pirates toy.
Tags
personal
Pictures
The Pip