One of SteelyKid's classmates came over for a couple hours today. After a bit, they got into the Magic School Bus science kit she got for her birthday, and decided to invent "new kinds of water." The "featured image" above shows her reinventing stock images... And doing a better job of it than this clown. If you need an image to illustrate your chemistry story, shoot me an email-- our rates are very reasonable.

(The sludgy brown mixture in the tube is water with soap, cinnamon, and cracked pepper floating in it. If you shake it back and forth a bit, the pepper does float around in a kind of cool-looking manner, which is what she's admiring. I didn't pose this, I swear-- that's a genuine "whoa!" face.)

(I did ask her to put the goggles back on, though, because it's a great look. She and her friend were taking turns wearing the goggles while re-inventing water in the downstairs bathroom.)

It's difficult to express how happy we are that she's reached an age where she can have a friend over and they can more or less entertain themselves, with only minimal supervision. And the fact that they find science-y ways of self-entertaining...? Well, let's give SteelyKid the last word on that: 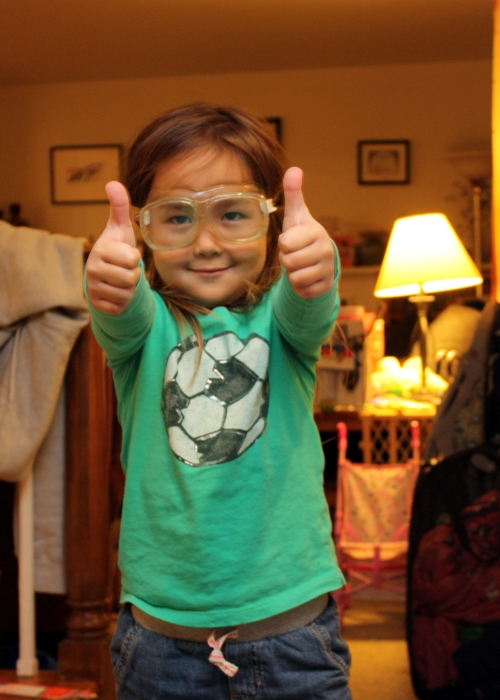 I could see myself watching the heck out of a TV show called "Steelykid, Scientist".

I could see myself watching the heck out of a TV show called "Steelykid, Scientist".

Not too many years older than her I started messing around, it wasn't so organized as actual research, with a discarded 12v model train transformer. For a few days, before I had a librarian help me look up the process, I had reinvented electrolysis by dipping the 12v leads into salted water.

I'm pretty sure I had that same WHoooooo expression when I noticed, and reconfirmed, that bubbles were coming off the wires and that one lead, always the same lead seemed to have significantly more bubbles than the other.

Of course back in those days, what with dinosaurs wandering about and all, there were actual chemistry sets and Boys Book of Science out there that provided neat ways of blowing up or poisoning one's self.

As I remember it there were a few explosions, small fires and some painful shocks, along with a the usual collection of cuts, bruises. I still carry a slight mark where I got a dandy of a huge blood blister from a large vice. It took weeks to heal.

I still remember being looped on model airplane dope from using it in a confined space and getting it into that wound and how it burned. Good times.

Sorry about the duplicate. Feel free to delete it, and this one, if you like.