SteelyKid and the Big Telescope

SteelyKid's class at her after-school day care has been learning about space for the last month or two (the program is very flexible-- the teachers ask the kids what they want to learn about, and then they spend however long on that topic the kids like), so we've been getting a lot of tidbits about astronomy related to us during car trips and dinner conversation. Last night, there was an open house at the Union College Observatory, so I picked her up a little early, and took her to campus to look through the big telescope (20-inch Cassegrain, for those who care about such things). This served double duty, because I wanted to see if we could see the supernova in M82, anyway. 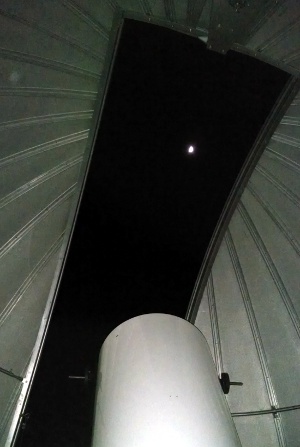 The Union College Observatory telescope, with the Moon visible through the open dome.

We got good looks at the Moon (that's what she's peering at in the "featured image" up top) and Jupiter (we could see four of the moons, and Io visibly changed position between the two observations, as it was just coming around from behind). We looked at M82 as well, but it was kind of low and it wasn't all that dark yet (had to get this in before bedtime...), so it was just a really faint smudge with a bright dot a little off center. SteelyKid didn't really believe that was an exploding star, but it was impressive to me-- that vague blur is millions of stars, the bright point is just one. Francis Wilkin, the observatory manager, said it was more impressive later in the evening, but I don't know if he took any pictures, but whether we end up with a nifty CCD image or not, I can say I've seen an exploding star with my own eyes, which is pretty cool.

Of course, the real highlight was SteelyKid, who was in fine form, bubbling over with miscellaneous information about stars and planets. When we were having dinner before going to campus, she told me how the first man to walk on the Moon was Neil Armstrong, and that she couldn't remember the name of the first dog. When I told her there had been a dog in orbit but not on the Moon, she wanted to know Laika's breed, and made me look her up on my phone.

At the observatory, while Francis was adjusting the telescope for the best view of the Moon, she explained to us that a great big rock had slammed into the Earth a really long time ago, and knocked off a piece that became the Moon. We agreed that that was the current explanation, then Francis said "Another great big rock came along and slammed into the Earth and that's what killed the dinosaurs." SteelyKid looked back and forth between us like we were a couple of lunatics-- "No way!"

She also talked at length about Jupiter's Red Spot, and how it's a giant storm that will never stop, and Saturn's rings. She was kind of disappointed that we couldn't point the telescope at Venus-- I think they've been talking about the inner planets recently-- but wasn't quite willing to get up at 5:30 this morning for a good look at it. (When I was walking Emmy at 6:00 this morning, Venus was up and very impressive. Which always makes me think of this speech (that clip is only a fragment) from the greatest X-Files episode of all time...). I told her we might come back in a couple of months to look at Mars, and she said "What!?!? You can do that?"

Anyway, it was a big hit, even if the seeing wasn't especially good, and the dome was rather cold. And for show-and-tell at kindergarten today she brought in copies of the above pictures, and the space book that was one of the treasures she found on Wednesday during the snow day(*). So she's pretty fired up about astronomy right at the moment...

(* - I had the idea at some point to play "treasure hunt" as combination of diversion and reading practice: I hid a bunch of small things around the house-- fruit snacks, Pokemon cards, some books and art supplies-- then wrote notes giving instructions on how to find them (see photo below). This worked really well for a while at least, and kept her from demanding to go back outside and play in the snow some more long enough for my extremities to thaw out. We've got a few more hidden treasures for the next time we're stuck in the house with nothing to do...)

Today is SteelyKid's seventh birthday, which she's been counting down to for a good while. It's a little hard to believe it's seven years since she was substantially smaller than her stuffed Appa toy. She's become quite a handful in that time, with boundless energy apparently derived from…

So you got a telescope for Christmas...

Great! So did I! Now the sky is a big place, and telescopes don't often come with an astronomer to explain how to use them. I'm not an astronomer either, but I've been an amateur stargazer on and off for years and I might be able to give you some good advice. First, the telescope itself. There's…

Another long photo-a-day gap, because the last week was crazy in a bunch of ways. The weather has slewed wildly between winter and spring; Kate had to go to The City to argue a case leaving me solo-parenting the sillyheads; and I've been fighting the onset of a rotten cold. That last has involved a…

"How is it they live for eons in such harmony - the billions of stars - when most men can barely go a minute without declaring war in their mind against someone they know?" -Thomas Aquinas Welcome back to another Messier Monday here on Starts With a Bang! Each Monday, we take an in-depth look at…

Steelykid is an example of the type of kids we need more of. These young kids should be more involved in fields of science starting at a young age so they could become more of a well rounded individual. This hands use of the telescope to show them the universe, and to teach them some of its magnificent history is a good way to get them to start liking science. I feel like hands on activities like on the popular kids channel, "PBS Kids", shows the kids in a up front learning style that smoothly teaches them the material.Steelykid's use of the telescope did not only show her views of the moon, but also raised some questions about the history of the moon. Getting kids curious about the wonders of science will make them more interested in the subject. With a strong science background, kids can grow into wise students.