Made it home Friday evening after another bout of airline nonsense-- they had replaced the plane for my flight into Albany with a smaller aircraft, so my email boarding pass assigned me to a nonexistent seat. Which had been corrected in their computer, but was never communicated to me, or to several other passengers who found themselves holding boarding passes from online that had the same seat assignments as passengers who had printed them at the airport. To be fair to Delta, this was the only glitch out of four flights, but it was a doozy.

Anyway, DAMOP was a lot of fun, but exhausting. So I'm taking a cue from The Pip, shown above (and below, for those reading via RSS), and trying to do as little as possible for as long as possible before getting back to the giant pile of paperwork I need to deal with. And just for balance, I'll throw in this picture of SteelyKid's response to being told that I was photgraphing her brother because the way he was sitting to watch tv was silly. 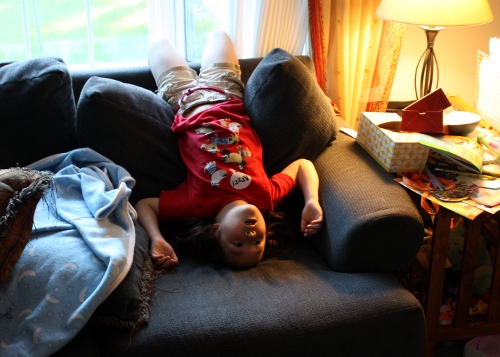 (For the record, these were taken Saturday morning, so it's not like this was their reaction to my return Friday evening. They were very happy to see me Friday, and The Pip even asked for me to take him at bedtime, which is nearly unheard-of (usually, I get several rounds of "No! Mommy snuggle me!"). But that kind of excitement has a short half-life...) 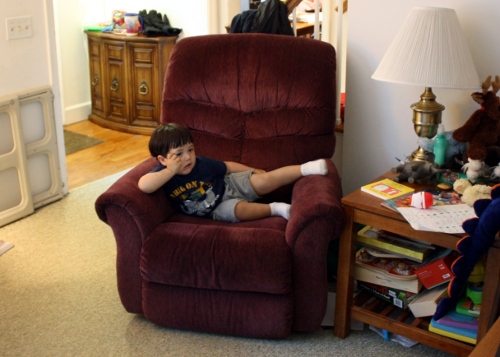 The Pip relaxing with some cartoons.
Tags
personal
Pictures
Steelykid!
The Pip