I said when I started this that there would inevitably be a few cell-phone snapshots, on days when I'm too busy to get fancy with the DSLR. This was one such, so here's a quick shot of SteelyKid at tonight's Elite Team taekwondo practice, talking to her coach. 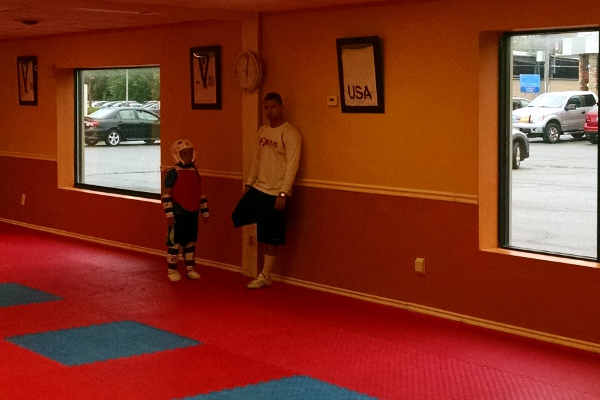 SteelyKid, in sparring gear, with her taekwondo coach.

The Elite Team class is all sparring, all the time, and we established today that she's the youngest kid who goes to those classes. By about two months. Of course, the gap between second- and third-youngest is two years... (The second-youngest kid is the younger brother of one of the nine-year-olds on the team.)

She's wayyy into it, though, and in fact opted to delay going to the annual back to school ice cream social at her elementary school in order to go to taekwondo. We went to the ice cream social late, and didn't get home until half an hour past bedtime, thus the quick cell-phone photo-of-the-day. And the quick collapse for Daddy once she finally goes to sleep...

Today is SteelyKid's seventh birthday, which she's been counting down to for a good while. It's a little hard to believe it's seven years since she was substantially smaller than her stuffed Appa toy. She's become quite a handful in that time, with boundless energy apparently derived from…

I feel a little bad that I'm doing two photo-of-the-day posts in a row that are just pictures of SteelyKid, but my day today was dominated by a taekwondo tournament down in Duanesburg, SteelyKid's first actual competition. And she got second place: SteelyKid with her silver medal from today's…

There are a bunch of physics stories that I'd sort of like to write about, but don't have time for, and politics is oscillating between "darkly hilarious" and "indescribably depressing," so that's best left alone. So, here's some cute kid pictures instead. SteelyKid has lately taken to telling all…
Advertisment