SteelyKid's second-grade class is doing a "Zoom Time" thing where the kids make short presentations to the class about one of their interests. It's basically an expanded show-and-tell, with fifteen minutes for talking, and five for "questions and compliments."

She, of course, decided to talk about taekwondo, so I brought her sparring gear in and she suited up: 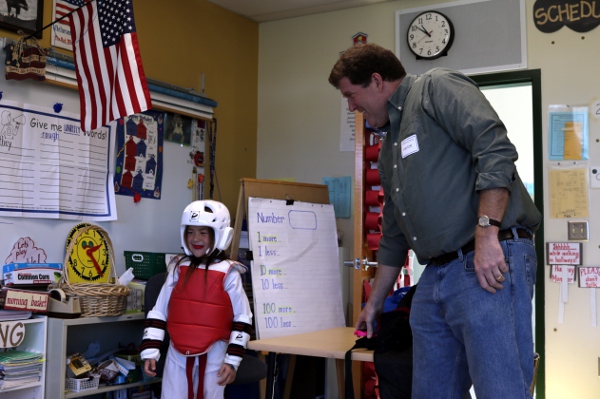 SteelyKid in sparring gear for her "Zoom Time" presentation. Daddy included for scale.

The highlight of the presentation was when she let the whole class come up and take turns punching her in the chest to demonstrate the effectiveness of the padding. I have a couple of really good shots of that, but I try to avoid posting photos of other people's kids on the Internet, so you'll have to settle for this one of her showing off her mouth guard.

In sort-of-related news, the Pip has started doing the "Little Dragons" taekwondo class (for 3-5 year olds), and is supposed to get a uniform today, so you can expect a photo of both kids in martial-arts attire at some point in the near-ish future...

(This picture might be cheating a bit in photo-a-day terms, because it was actually taken by SteelyKid's teacher using my camera, but the pictures I took all had other kids in them. I like the way the framing and perspective in this shot make it look like I'm coming through a door that's less than shoulder height on me...)

By the way, the "questions and compliments" period is a great idea-- about half of the kids who raised their hands were just offering praise: "This was a great Zoom Time because it made me want to try taekwondo so I could be like you." I think adult academia could stand to adopt this idea.