I feel a little bad that I'm doing two photo-of-the-day posts in a row that are just pictures of SteelyKid, but my day today was dominated by a taekwondo tournament down in Duanesburg, SteelyKid's first actual competition. And she got second place: 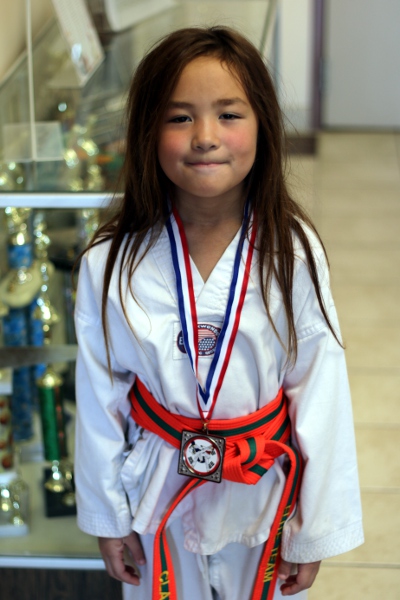 SteelyKid with her silver medal from today's taekwondo tournament.

This is somewhat less impressive than you might think, because she was in a division of three. She actually lost her one bout fairly badly, but did slightly better than the third girl in the field, thus getting the silver medal. But again, it was her first time competing, and on top of that, she got kicked in the eye at one point (which got her opponent reprimanded by the ref) but fought through that and got some good shots in late in the bout.

So, we're very proud of her effort and determination. And while there were a few tears shed over the kick to the face, she was very pleased with her medal, and I suspect we'll be going to more of these tournaments in the future...

(From the parental side, this was about four hours of standing around with about two minutes of incredibly nerve-wracking action in the middle. (We could've cut an hour plus off that, but we stuck around to support the boys on her team, whose sparring started after the girls' finished...) This is a slight improvement over my sister's swim meets back in the day, because 1) the gym was slightly less hot and humid than a typical pool, and 2) once the actual matches started, there were always kids kicking each other in the head, which is way more entertaining than distance races in swimming.

(But, I have to say, it was not at all easy to stand on the side and watch another kid kicking SteelyKid repeatedly. Even though she's been doing this for a good while now-- combat sports are rough for parental instincts...)

Yah, my son wrestled in high school, I could never watch it. He has a black belt in Judo now.

Her strength and willingness to stand up to adversity will serve her well. She can win against a stronger and more talented opponent with little more than grit and determination, if she can take the hits and face them down.