Saturdays are the busiest days around Chateau Steelypips, with both SteelyKid and The Pip having soccer in the morning (in two different places), then lunch, then some sort of activity for the afternoon. Yesterday, this was a party for one of SteelyKid's friends. And last night, there was a Movie Night at SteelyKid's BFF's house, where the kids all watched a cartoon and the adults hung around reveling in adult conversation.

All of which means that I managed to go the entire day without taking any photos. Not even a cell-phone snapshot (I'm assistant coaching SteelyKid's soccer team, but the other coach wasn't there this week, so I was on my own, which doesn't allow for photography).

So, here's a shot of The Pip from Friday night: 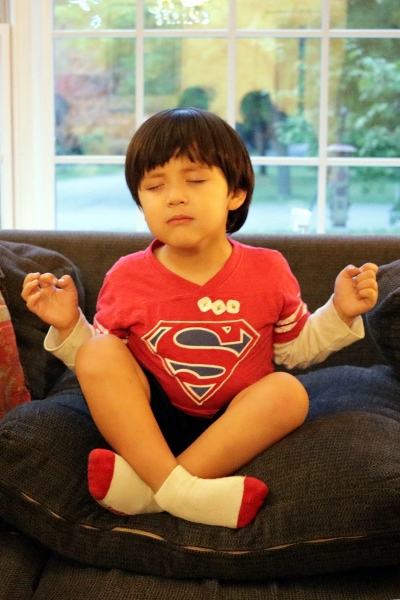 Since our trip to DC back in July, the kids have been nuts for the Cartoon Network show "Teen Titans Go." One of the characters, Raven, uses magic as her power, and spends a bunch of time floating in the air and meditating. The Pip finds this fascinating, and will periodically declare that he's meditating, striking this pose. Usually with a scrunched-up intense face that doesn't suggest contemplation of the infinite, but this shot was in a sort of transitional moment, and actually looks vaguely meditative.

And it's cute, so works as a "sorry for no new photos" offering...

I'm back after the traditional family holiday and a less traditional trip to Charleston, SC for the Renaissance Weekend meeting. Which means things will start to return to what passes for normal around here, and that means it's time to get caught up on photo-a-day pictures... What with one thing…

It's a big week in Chateau Steelypips for martial arts and cute-kid photos. On the heels of SteelyKid's first competition this past weekend, we have the Pip's first belt test tonight (and SteelyKid is testing for her brown belt Wednesday, so you should probably expect one more kid-martial-arts…

The Pip is in a big superhero phase at the moment, and all of his games revolve around being a superhero of some sort. He has also basically memorized a couple of 30-page Justice League books, after demanding them over and over at bedtime. As I did with SteelyKid, I make a game out of reading the…
Advertisment