It was a cool clear morning when I took Emmy out for our morning walk, with a band of high clouds running eat-west across the sky to our north. After watching a bit, I realized that these were probably entirely seeded by jet contrails, as I saw at least four planes flying along that band during the walk.

This shot catches one of them (the big band crosses the frame diagonally at lower right), plus a second running parallel to it but a bit farther south, and a third crossing them: 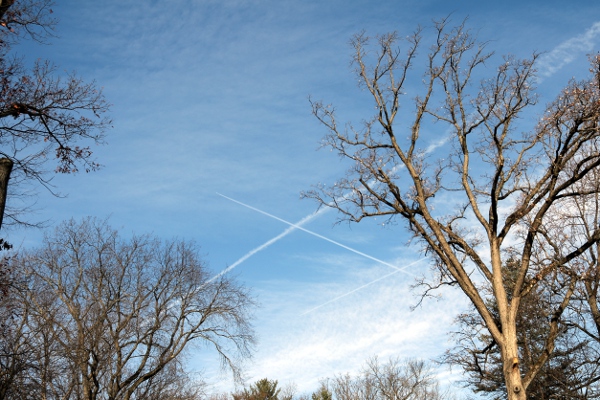 Contrails crossing in the northern sky.

I'm guessing this must be a route from Boston to points west, possibly even a corridor for European flights to Chicago and Detroit. Whatever it is, there's a ton of air traffic up there.

Back in 2002, after the September 11 attacks shut down all air travel for the better part of a week, I remember reading stories about how there was a substantial increase in the amount of sunlight reaching the ground thanks to the loss of airplane-created clouds. That always seemed kind of surprising, but watching all those planes this morning makes it a lot more clearly plausible.

That guess would be correct. Eastbound flights headed toward Boston typically begin their descent over the Albany-Schenectady-Troy region.

On 9/11 and for a few days after, there was a clear sense of "something missing," that being the sight and sound of jet airliners in the sky. The sounds of helicopters and occasional military jets were reassuring, as we mobilized to deal with the threat, but weren't quite the same thing: reminders of a new and dangerous world, rather than a familiar and cozy one.

I recall a few weeks after 9/11 driving down to San Jose and seeing an airliner swoop in on a low landing path across the freeway. And I thought: this is civilization, safe skies and the freedom to travel; we will not let a handful of barbarians take any of that away from us.

Civilization is good. Airliners are a sign of that. And while they aren't as efficient as railroads, they are per passenger as efficient as hybrid automobiles. We may, probably will, have to reduce our amount of flying around, as part of the effort to come to grips with climate change. But that's not the same thing as being chased out of the sky by the fear of barbarian attacks.

Lastly, I'm surprised we haven't yet heard from the "chem trails" crowd, who think those jet trails are some kind of insidious plot to spray poison on us from the sky. There are actual videos on YouTube of people spraying vinegar into the air in their back yards, "to make the trails go away." When the trails disperse as they naturally do, these people believe themselves successful at deactivating the "evil chemicals." Watching that stuff, one has to wonder what went wrong with our educational system beyond the obvious funding cuts.