We had our usual tv time on Sunday morning at my parents', with the kids alternating picking what they watched. When it came around to SteelyKid's turn, she opted for MythBusters, which wasn't available on demand, but she has several episodes on her tablet. Of course, if SteelyKid was going to watch video on her tablet, then The Pip had to watch video on his, which led to this shot: 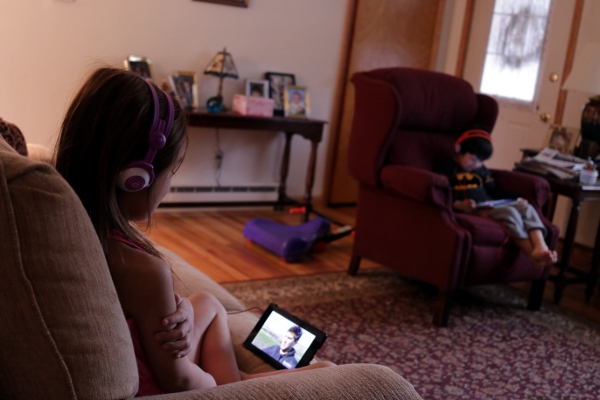 SteelyKid and The Pip watching video on their tablets.

And also blissful, blessed quiet, a gigantic improvement over the sounds of "Paw Patrol," which was The Pip's cartoon of choice on this trip. And, well, ugh.

Anyway, that's what's up with the kids these days and their newfangled personal multimedia devices. And music that's just noise-- NOISE, I tell you...