We lost the Queen of Niskayuna tonight. Emmy had been having some health issues for a while, and while we were in Florida this past weekend she wasn't eating for the pet-sitter. We tried yet another new version of the new diet food today, with only limited success. And this afternoon, she fell going up the stairs, then again on the deck.

Our regular vet was near closing time, so they recommended going to a different veterinary hospital in the area, where they could do x-rays and ultrasounds as needed. And those revealed a large mass in her abdomen, from tumors in her liver and gall bladder. We might've been able to eke out another few weeks, but the only reason would've been to maybe have a slightly happier goodbye, and she was just too miserable to put her through that.

I spent a good while at the vet's sobbing, because she was a great dog, and the best Emmy ever. And now I'm looking back at some very old pictures and remembering a dozen years with Her Majesty. This snowy photo from 2003 has always been one of my favorites: 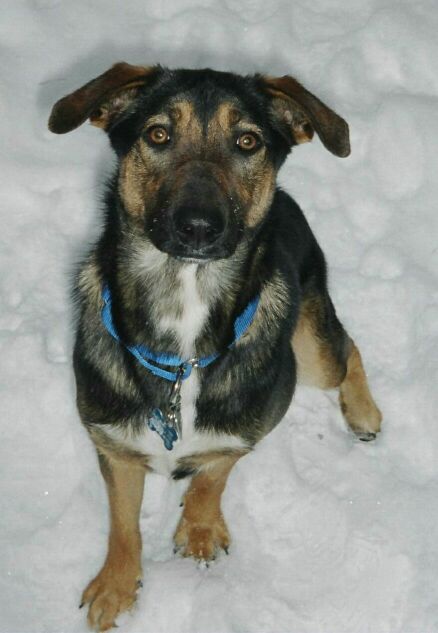 Emmy in December 2003, only a few months after we got her.

(Her normal collar was red, but when we first got her, she had a habit of chewing through them, and thus there was a brief stretch when she wore a blue collar, because the pet store didn't have any red ones that day...)

Because I'm usually the one behind the camera, I don't have all that many photos of me and Emmy together. This is one of the best, from March of 2008: 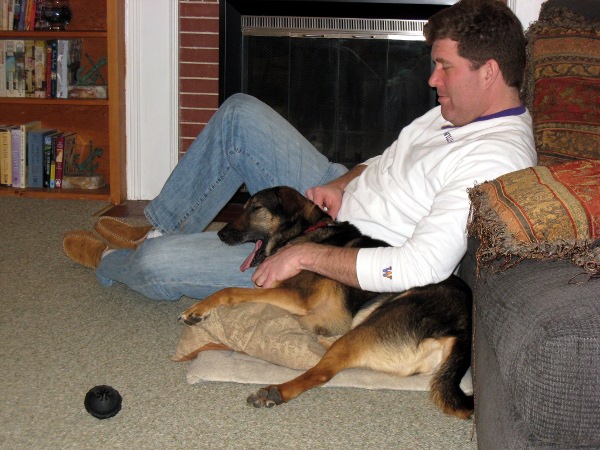 Emmy and her Big Human, chilling out.

I had vaguely meant to do a picture for the photo-a-day project using the camera remote to get the two of us together; now I'm kicking myself for not getting to it soon enough.

Anyway, she was a great dog, and lived to a ripe old age by canine standards. We had twelve fun and eventful years with her, which is at once more than you can expect, and not nearly enough.

And I'm pretty much a wreck right now, so don't expect much from me for a while.

All leaky now. Emmy was wonderful.

My condolences to you and the rest of her family, but especially to you. After all, you wrote your best books together.

She will be missed here in blog world as well.

I'm very sorry for your loss.

Damn. Any dog leaves a legacy of happy memories with the people in their lives; Emmy's also includes all the people she's helped learn about physic through your books and blog as well. She will be missed.

I am so sorry for the loss of your faithful companion.

As a long time reader and fellow dog person, my sympathies. It's very hard to let them go. My thoughts are with you and family.

I am so sorry. My deepest condolences to you and the whole family.

May the memories of her give you strength in the days to come.

So incredibly sad for your family.

I feel for you.

Losing a dog is hard. They give so much for so little.

Sometimes a little family ceremony can go a long way to everyone gaining closure. Death is inevitable, how we handle it gives it meaning.

I'm so sorry for your loss. My deepest sympathies to you and your family.

Chad, I am so sorry to read of Emmy's passing. My heart and thoughts are with you and your family.

Sorry, Chad. She'll live on every time someone picks up one of your books.

I'm so sorry, Chad. What a great dog, and an inspiration for other dogs setting out to learn physics. Thinking of you.

I am so sorry for your loss.

Condolences on the loss of your beloved friend and family member.

My deepest sympathy and empathy.

Been there, done that. It is so hard. You have my deepest sympathy.