Back in the fall, a note came home with SteelyKid about an organizational meeting for an Odyssey of the Mind team for her elementary school. My father coached this for several years back in the 80's, and one of my sister's teams went to the World championships (held in Cole Field House at the University of Maryland, of all places, which put an odd spin on going there for basketball games when I was in grad school....), and of course, I'm all in favor of creative problem-solving. So we went, and I ended up as one of the coaches of the team.

The kids, to the surprise of the other coaches, voted for the balsa-wood-construction project ("Stack Attack!" on this list) by a significant margin. So we've acquired a lot of balsa wood and glue, and have spent the last couple of Wednesday night team meetings gluing them together to make a structure that (hopefully) will support a significant amount of weight. And here's their first completed test structure: 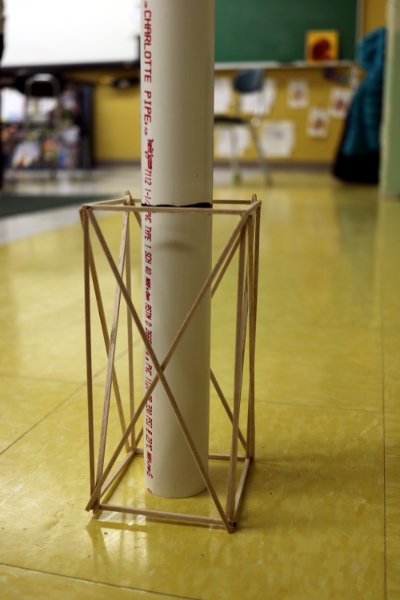 The first complete test structure from SteelyKid's Odyssey of the Mind team.

(I have more photos from last night's team meeting, but they all have other people's kids in them...)

We haven't tested this yet, because it was late, but hopefully next week we'll see what kind of weight it can support.

This has, by the way, completely confirmed what I already knew, namely that I could never, ever, ever, ever, ever make it as an elementary school teacher. I'm pushed to my limits riding herd on seven second-and-third-graders ("Stop waving the glue around! Why are you touching that? What are you doing? I said, stop waving-- you're dripping glue on the floor! Get back here, it's not time to play tag... Stop bugging the other group, they're building their own structure... Put the glue DOWN, already!..."). I can't begin to fathom how SteelyKid's teacher manages a class of 23.