As I've mentioned a few times, SteelyKid is part of an Odyssey of the Mind team through her school, working on a problem to build a structure from balsa wood and glue that will hold as much weight as possible. They've been hard at work the last several weeks, and completed a test structure last night, shown here just prior to testing: 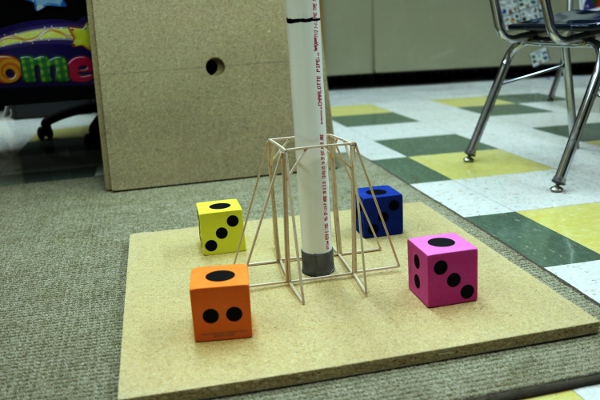 This ended up supporting about 53 pounds before it collapsed, which means it could've held up at least one of the team members. Not too shabby. The kids were very fired up for the crushing process, and justly pleased with themselves for the result.

Of course, now we need to make another one just like it, and hope that it holds as well. A process complicated by the fact that I've been the coach assisting with the construction, and I'll be away next week during both of the team's practices, giving a talk at the University of Illinois. And the competition is next Saturday...

This is very cool. Our neighbor was in charge of this competition in one of the schools in our district, and he enjoyed working with kids on this as much or more than teaching in general.
Best of luck to the team in the coming competition.