I feel a little bad sometimes that I don't really give the Pip his due on the blog. Back when SteelyKid was a toddler and pre-schooler, I had a lot more free time in which to transcribe the various conversations I had with her into super-cute blog posts. The Pip is in the same sort of stage now, and tells some amazing stories, but I have much less time, and by the time I do get free to get to the computer, I usually forget about it.

However, while cleaning up and photographing the Giant Shelf of Kid Art, I ran across a book that he made with... One of his preschool teachers, I guess, because it wasn't me or Kate. It's all about his current obsession, the Nick Junior cartoon PAW Patrol (which, if you're not familiar with it, is written up by Drew Magary at Deadspin, who pretty much nails it), and now that I look at it, functions both as a good record of the sort of conversations we have with our cartoon-obsessed Little Dude and a spec script. Yo, Nickelodeon-- hire this boy!

So, I present to you The Pip's spec script for PAW Patrol: 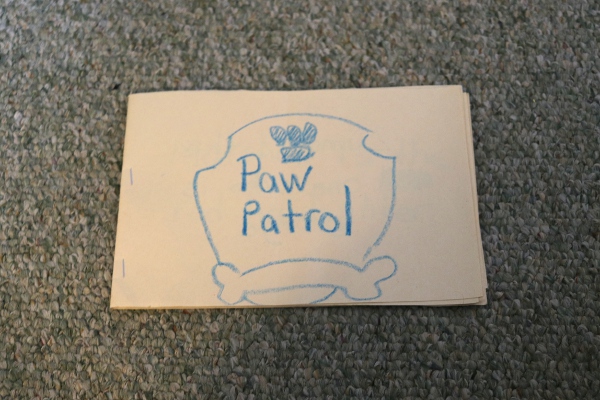 The cover of The Pip's PAW Patrol book.

Zuma is the one who is orange.

Marshall is the red fire fighter.

Skye is the one who is a helicopter pilot with pink clothes and goggles.

Rocky has a green grabber.

Rubble helps to save the day. He moved popcorn.

Chase has a net and is blue.

There was an emergency. The train was blocked in by boulders.

Chase had to wince. Rubble used his shovels.

Rocky put the rocks in his recycling truck.

No job is too big, no pup is too small.

This emergency happened at the big balloon race.

Skye and Marshall helped her.

Ryder is a human. He caught Marshall.

So, there you have it. My four-year-old's bid to work in television.