Beautiful periodic table from LIFE magazine's 1949 special on the atom 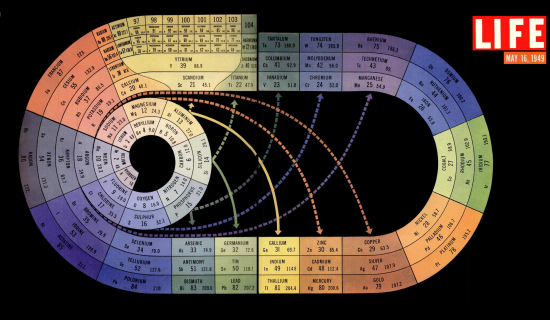 In 1949 LIFE magazine dedicated a huge part of their May issue to The Atom, including the gorgeous illustration shown above.  As well as discussing the properties of the atoms, their internal structure and chemistry, the team produced a stunning series of images accompany the text. Science reporter Robert Campbell and photographer Fritz Goro spent a year trying to solve the problem of showing the intricate, invisible nature of atoms; going so far as to blow their own luminescent glassware, lighting candles in sealed containers with magnifying glasses and building models out of Christmas tree baubles and light bulbs. A single image of uranium atom required four lenses, fifteen film adjustments and thirty three exposures.

Technically brilliant as they were, it's the artistry of this visualisation of the periodic table that really captured my heart. From the accompanying text:

The irregular spiral above is a systematic arrangement of the 92 natural elements, the four new elements so far created by man and eight more elements which is theoretically possible to create... It is on the basis of this number [of electrons] that the elements are arranged in sequence: after hydrogen, with  its single electron, come helium with two, lithium with three, beryllium with four and so on around the spiral... The table is so organised that elements whose chemistry is almost identical are grouped together in blocks or connected by solid arrows (al the inert gases – helium, neon, etc. – fall in the single gray block at the left).

Be sure to click on the image to see full size.

I had painted a spiral version of the periodic table a few years ago: http://clowder.net/hop/elements/Elements.html

This design is a coloured version of John D Clark's design, Journal of Chemical Education, 1933. It inspired Edgar Longman's beautiful mural in the Festival of Britain Science Exhibition, 1951, which in turn inspired my Chemical Galaxy. A spiral has the virtue of not breaking up the continuous sequence of elements and is more compact than a table. Curved forms in any case appeal to the eye more than rectangles.

Beautiful blog, and truer to the way we think about periodicity.

I will be sending a link of this blog to our local ACS section e-newsletter.

Improved URL that takes you page 68 where the article begins. http://books.google.co.uk/books?id=_04EAAAAMBAJ&pg=PA68