The Promise and Threat of Ethiopia’s Dam on the Nile: 21st century Water Conflicts

The Nile River – river of legend – is not just a river in Egypt. It is the lifeblood of 11 different African nations and the longest river in the world, extending over 6,500 kilometers long and draining a watershed of over 3 million square kilometers. The eleven nations that share the Nile are Egypt, Ethiopia, the Sudan and South Sudan, Kenya, Eritrea, the DR of Congo, Tanzania, Uganda, Burundi, and Rwanda.

Over the past centuries, indeed over the past millennia, the waters of the Nile have been captured and harnessed by the people of Egypt, who depended initially on the ebb and flow of the river for recession agriculture, and in modern times, on hydropower and irrigation waters pulled from the massive Aswan Dam or from downstream diversion systems. By some estimates, 97% of all of Egypt’s water comes from the Nile, and to say that the nation is critically dependent upon it – with a population of more than 80 million people -- is an understatement.

It should be no surprise then that Egypt, as the most downstream nation on the Nile, is extremely sensitive to what happens upstream of its borders. As long ago as the1970s and 1980s, statements from senior Egyptian officials warned upstream countries to keep their hands off of the Nile. In 1978 President Anwar Sadat said

“We depend upon the Nile 100 per cent in our life, so if anyone, at any moment, thinks of depriving us of our life we shall never hesitate to go to war. . . . The only matter that would take Egypt to war is water.”

“The next war in the Middle East will be fought over water, not politics.”

Ethiopia, which has never had the economic, political, or technical ability to exploit the waters of the Blue Nile except in a simple way, has begun building what will be the largest hydroelectric dam in Africa, the Grand Renaissance Dam, very close to the Ethiopian/Sudanese border. The massive reservoir behind the dam will be capable of storing more than an entire year’s flow of the Nile. Like any major energy project, this one has complicated advantages and disadvantages. But the political and hydrological implications for Sudan and Egypt are potentially the most explosive. [A later post may discuss the environmental, social, and economic pros and cons of the dam, the complicated international political story behind the dam’s construction and financing, and the implications for the region’s development. My focus here is the geopolitical challenges posed by the dam.] 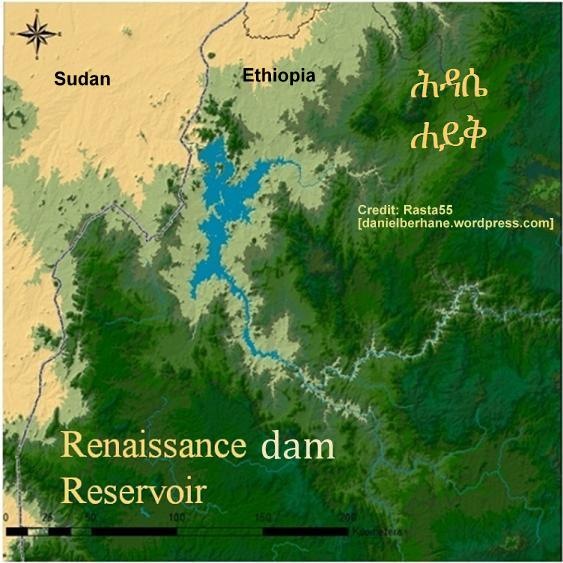 The proposed reservoir behind the Grand Renaissance Dam in Ethiopia near the border with Sudan. Credit: Rasta55, danielberhane.wordpress.com

The implications for the waters reaching Egypt are uncertain. No comprehensive environmental or technical assessment of the dam has been released – it is possible one has not even been prepared. And much of the ultimate impact depends on how the dam is built and operated and how the waters are managed. But here is what can be predicted, using official descriptions of the dam and reservoir:

Finally, the dam is already being seen in the light of larger political disputes. In February this year, Saudi Arabia’s deputy defense minister Khalid Bin Sultan harshly criticized the Ethiopian project and argued that its location close to the Sudanese border was “for political plotting rather than for economic gain and constitutes a threat to Egyptian and Sudanese national security…” He went on to link the project with Arab/African tensions: “There are fingers messing with water resources of Sudan and Egypt which are rooted in the mind and body of Ethiopia. They do not forsake an opportunity to harm Arabs without taking advantage of it…”

An international panel of experts has just completed a study (reportedly submitted this week to the governments of Egypt, the Sudan, and Ethiopia but not yet made public) about the dam. Whether that report serves to facilitate discussions among the parties about the design and operation of the dam, or simply hardens the political positions of the countries remains to be seen. But the risks of rhetoric over shared international water resources bubbling over into actions seem to be growing.

In the end, I hope and expect this conflict to remain political and rhetorical, not military. The costs of military actions against a neighboring country solely because of disputes over water are extraordinarily high: politically and economically. There is a long history of conflicts over water, but rarely is access to water the sole cause of interstate conflict; rather it can be a contributing and complicating factor when disputes start for other reasons. Yet almost nowhere else on the planet is a powerful downstream country so completely dependent on upstream nations for critical water supply as is the case for Egypt. That reality plays a special role in the story now unfolding on the Nile.

And the Egyptians hard liners keep talking about war? What kind of war hit and run? Definitely you cannot control the Nile by force and still staying in Ethiopia. So the best way should be negotiate and fairly utilize the river, other than that you will never win the war, you make things worse

There is no reason Ethiopia cant use the river while being the source of 85%of the nile.sensible agreement can be achieved if there is willingness to.work together.A rhetoric for war is expensive and is bad.for all the countries,both politically and Economically.

hey,,,,is this study or fulshe estimation,try to get best info from the owner of the nile ethiopia,,,we can do what ever we want b/c it is our ressource,,
idiot western

These old colonial treaties will not hold. The water belongs to the countries and not to Egypt who believe they can bully SOVERIGN countries. The Blue Nile is for Ethiopia and the dam is their right! tanzania, Uganda and the others have a right o the waters ofhte Whilte Nile. If roles were reversed, Egypt would damn up the water and let the downstream countries starve.! As for Sudan, it is a sad excuse to be a lap dog of Egypt.

There is a National Geographic post from January that mentions existing plans for industrial farming (and the requisite heavy irrigation) for the region below the dam.

The blog also mentions a report (which I cannot track down) commissioned by the European Investment Bank. The EIB is no longer financing the project, but they were involved earlier in the proposal.

I believe there is enough water for all riparian countries so long as they utilize it within the Nile basin.

Also, Egypt should look into its water waste issues - they can start by studying agricultural water conservation, water recycling etc.

One obvious benefit for Egypt from the Renaissance Dam is the cheap hydro-power energy by switching from using natural gas & diesel. It is also renewable energy.

Oh dear lord, Out of all this African countries Egypt is the most that need attention & to write about.
Here is the fact. The blue/white Nile are shared b/n Ethiopia, Uganda, Kenya, Tanzania, Burundi, Rwanda, Democratic Republic of Congo, Sudan (Including South Sudan) and Egypt. Eritrea, not in it.
The blue Nile specifically originates from Ethiopia almost 90% of flow inside Ethiopia and continues to Sudan and connects to white nile and pass to Egypt and dump itself to the Mediterranean. Historically Egypt after the pyramids and war and enslavement of the innocent - it is cursed, but other European and middle eastern start emigrating there for knowledge and economical benefit. ( I know you may not believe this if you are a western scientist) but do your research scientific way non-metallic pyramids, like the Great Pyramid, they're the greatest concentration of energy and they soak energy and fertile the land won't work. Regarding Egypt past history in Africa is disgusting the people live in the continent soaking all resource & being entitled to everything. In the past years Egypt created a small little war around the continent funding religion extremist in Somalia, Eritrea, Darfur-Sudan to weaken the region. With all that money they spend on the war they should have maintain the water they waste and work hard.
They still do have a chance if they let go of their false entitlement work hard with other.

Diachronic competition: the present competing with the future.

America develops oil first, do we have any moral basis to claim a superior right to automobiles over China?

Bottom line: population/consumption overshoot of resources on a global scale.

Question is, is there any plan to get the UN involved to negotiate a peaceful solution to this one? Or shall we stand idly by, and "let nature run its course" wherein overshoot is always followed by dieoff and collapse?