Last week, the Pacific Institute published the first comprehensive analysis of the impacts of the drought on California crop revenue and agricultural employment through 2014. The study showed that during the recent drought California’s agriculture sector experienced record-high crop revenue and employment. Crop revenue peaked in 2013 at $33.8 billion, the highest level in California history, and declined only slightly to $33.4 billion in 2014 (all economic data have been corrected for inflation). Statewide agriculture-related jobs also reached a record 417,000 jobs in 2014, highlighting the sector’s ability to withstand the reduction of available water.

At the time of that analysis, revenue for nursery and animal products were not yet available. Additionally, data were not available on agricultural production expenses. However, the Economic Research Service (an agency within the U.S. Department of Agriculture) has just released an updated U.S. and State-Level Farm Income and Wealth Statistics, which gives a more complete picture of the entire agricultural sector during the drought. The data include the gross income from all agricultural products (including nursery and animal products), other sources of agricultural income, and farm production expenses. The difference between gross income (including cash income, non-cash income, and changes in inventory) and production expenses is the net farm income. Net farm income represents the return (both monetary and non-monetary) to farm operators for their labor, management and capital, after all production expenses have been paid.

These new data further support our findings that California farmers have implemented a range of strategies in response to the drought and as a result, have fared relatively well.  But while some of the strategies have helped to build the resilience of the agricultural sector in the face of limited water availability, others will have lasting and damaging consequences to local communities, ecosystems, and future generations. 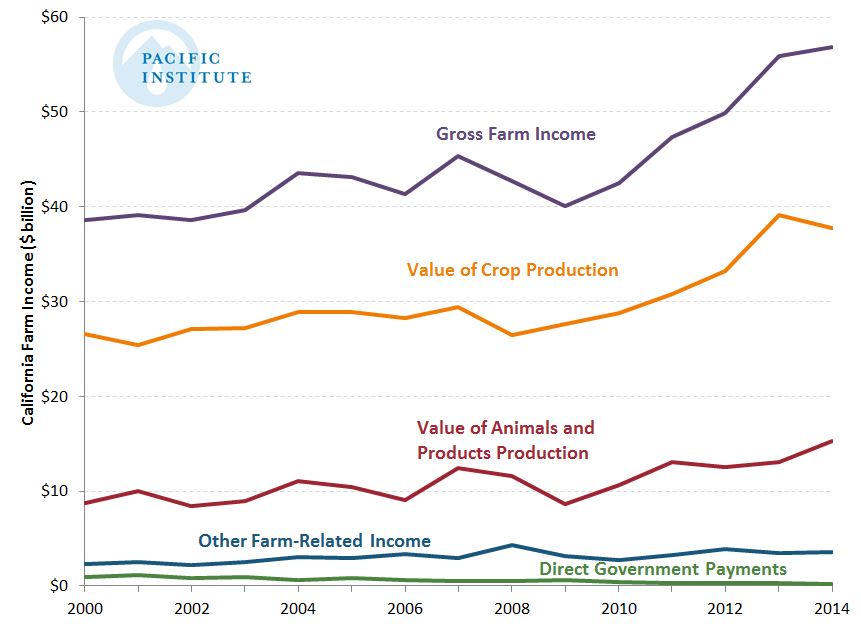 Note: All economic estimates have been corrected for inflation and are shown in year 2015 dollars. Data from Economic Research Service. (2015). Farm Income and Wealth Statistics, Value added to the U.S. economy by the agricultural sector. USDA.

However, gross income is only part of the story; what about production expenses? While some expenses may go down during the drought (e.g., seed or diesel fuel costs may go down if less land is planted), others may increase. For example, as farmers pump more water from greater depths, electricity costs rise. Indeed, the data show that overall production expenses increased every year since 2011, reaching a record $41.1 billion in 2014 (Figure 2). The single-largest increase in expenses was in contract labor, which increased by $1.3 billion from 2013 levels. Surprisingly, while several articles suggested that the drought would push feed purchases higher, the largest reduction in expenses was from feed purchases, which were down by $1.5 billion from 2013. 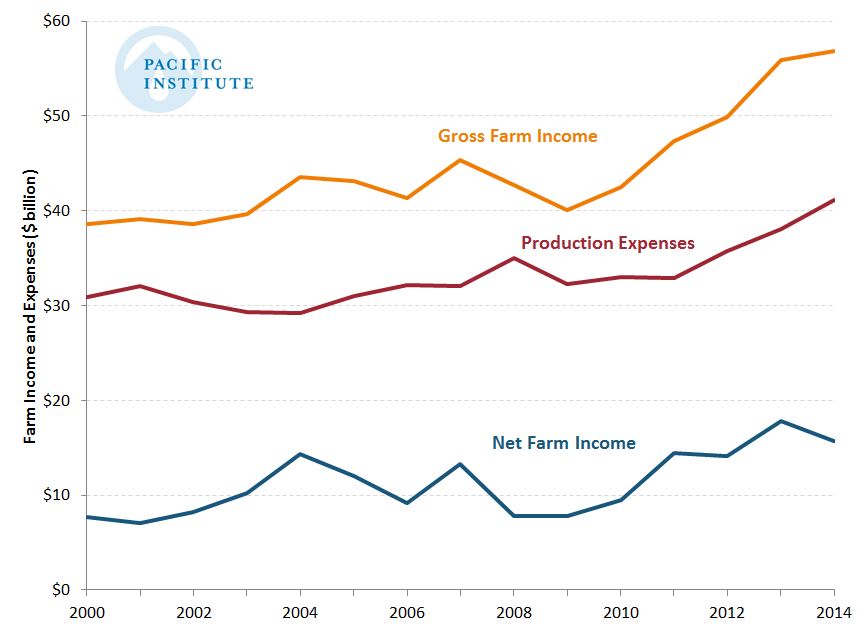 How do higher income and expenses compare? Subtracting farm production costs from gross receipts yields net farm income (Figure 2). In 2014, net farm income was $15.7 billion, down $2.1 billion (or 12%) from 2013 levels. However, 2013 was a banner year, with net farm income peaking at $17.8 billion. Indeed, net farm income since 2011 has been higher than at any other time in California history.

How can agriculture be doing so well in the worst drought on record? There are good reasons – and not so good reasons.

On the negative side, some responses – most notably massive groundwater overdraft – are unsustainable. It is no surprise that groundwater pumping increases during a drought. The problem is that in many areas, we fail to let those aquifers fully recover when the rains return – leading to long-term groundwater overdraft (as shown in Figure 3 for the Central Valley).  Overdraft puts groundwater quality, groundwater storage capacity, and above-ground infrastructure at risk, and the costs of these risks are born by current and future Californians, including farmers.

But on the positive side, California farmers are increasingly employing drip irrigation and other water efficient practices, and they are growing more high-value crops. Together, these measures have enabled farmers to get the most economic value out of every drop of water. It is important to note that efficiency improvements cannot often be made overnight; rather, they must be part of a long-term strategy to build a more resilient agricultural sector for sector.

The drought is providing policymakers, farmers, and agriculture officials a unique and urgent opportunity to plan for and implement more sustainable water policies and practices to support a vibrant and sustainable agriculture sector in California. Let’s not let it go to waste.

Impacts of the California Drought: Agriculture

Heather Cooley and Peter Gleick California is in a severe drought – four years long now. But what does the drought really mean for the things we care about: food production, fisheries, industrial activities, rural communities? As part of the work of the Pacific Institute to evaluate both the…

The California Drought: Almonds and the Bigger Picture

[As part of the Pacific Institute’s ongoing efforts to evaluate the impacts of the California drought and offer strategies, technologies, and policies to reduce those impacts, we are presenting a series of short assessments on “Understanding the Numbers.” This piece is the part of that series.]…

The Future of Desalination in California is Still in the Future: California, Israel, and Australia

It’s only natural that during a crisis we look to single, “silver bullet” technical solutions, after all, they are supposed to be effective against werewolves, witches, and other monsters. For monsters like the ongoing severe California drought, the current favorite silver bullet is seawater…

The end of the rainy season in California is arriving in a few weeks, and the April 1st snowpack measurement, which is a key indicator of water conditions, is tomorrow. As we approach the dry spring and summer months, the scope and severity of California’s drought will become more apparent, but it…
Advertisment