The youngest planet ever discovered?

Starts with a bang reader Dumb Ass Dave points us to this BBC article about the discovery of a planet that's only just forming around a new star. The planet is surely less than 100,000 years old, although the 1,600 year old figure quoted in the article is probably hogwash.

How do you find it? Take a look at this picture below, taken in radio waves: 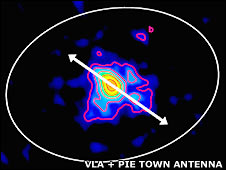 That big blurry thing in the center? That's a newly forming star, with a proto-planetary disk around it. But see that little blob in the upper right? That's a planet forming up there! When they do their analysis and determine its mass, it turns out to be about 14 times the mass of Jupiter, or just slightly below the threshold to start nuclear fusion at its core and turn into a star.

Now, this is actually really surprising. The main theory on how you form a planet is that you start by forming a big star, and the star gets a disk around it. The little imperfections in the disk start to stick together and grow over time, attracting more and more matter, eventually building up to be so large that they either attract or gravitationally eject everything. What we've found here isn't consistent with that; instead, it looks like this clump formed very early, and is just sweeping up material everywhere it goes, very rapidly. The researchers have a video available of the simulation here; I've stolen it and embedded it below:

So, neat! We've got a new window on planet formation around stars, now, and it looks like this may change the way we think about how our solar system formed! Say thank you, HL Tau!
Tags
Uncategorized
formation
Jupiter
Planets
Solar System
star