Old man Dave writes to me about his back problems:

The spine. I want to know about the spine. I know you are not that kind of PHD but still……. I’ve had back problems most of my adult life. It seems to me if we were “intelligently” designed that we might have a more efficient, and less troubling, method of uprightedness…. given the way the spine is constucted isn’t it possible that we were not “made” to walk upright??

Well, the spine goes back a long time, Dave, long before you were busting yours trying to lift things with your back instead of your legs. (You know better, Dave!) There are plenty of animal-types without spines at all, like starfish, jellyfish, worms, beetles, shellfish, and mollusks. Some of these spineless creatures are really advanced and complicated, like this giant, shark-eating octopus!

But about 530 million years ago, the first vertebrates evolved. What makes vertebrates special?

Mammals, birds, amphibians, reptiles, dinosaurs, and bony fish have all of these things in common with one another, and with all vertebrates.

So, spines have been taking care of us, as animals, since the Cambrian explosion. But human ancestors have been using tools for only about 2 million years. Now over the last 2 million years, humans (and the species that have evolved into us) have grown larger, stronger, with more developed brains, they walk more upright, and their hand structure exhibits more manual dexterity. Evolution has selected for those things, and that's why we're the only surviving hominids. We out-competed everyone else; only about 30,000 years ago did the last neanderthals and homo erectus specimens die out. But while those things have led to humanity thriving in this world, apparently lifting heavy objects without lower back pain hasn't been a species-threatening proposition.

So, no, we haven't evolved anything better than spines for heavy lifting. Why? Because it doesn't help us survive to do heavy lifting! Walking upright isn't much of a problem for our backs at all, though. There have been bipedal vertebrates going back up to 200 million years (like my old friend, the allosaurus). In fact, being more erect is better for your back; that's why people with good posture have less back pain than people who slump, and modern humans walk more erectly than any of our ancestors. So do what you know you should be doing: lift with the proper technique (like Joe Bonomo, left), not so much with your back (right). 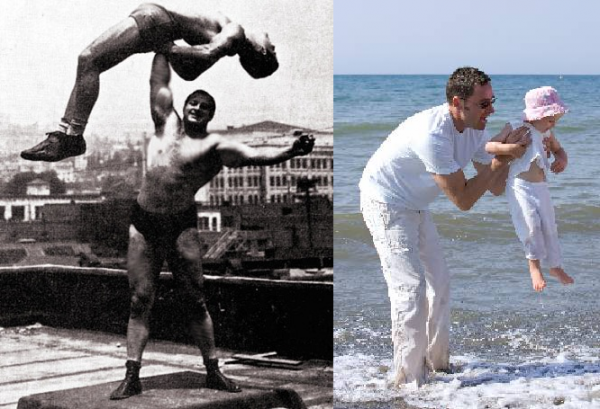 And that's the way you do it!

Don't let him pick on you Dave, he might be right but ...