One of the holy grails of modern astrophysics is to find a planet orbiting another star that can support life on it. There are all sorts of missions dedicated to searching for habitable worlds.

But with one star system, Gliese 581, we may have hit the jackpot. To look at Gliese 581 in the sky, it doesn't look like much. 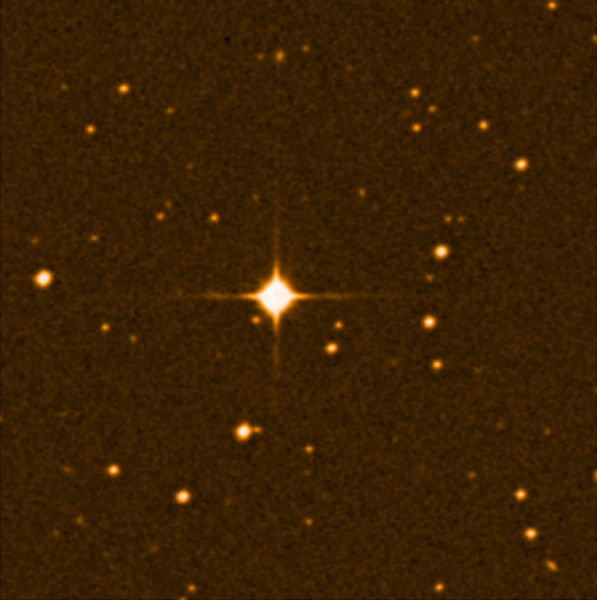 It's a red dwarf star, and a much smaller star than our own Sun. It weighs in at only about 30% of the mass and size of our Sun, and it's estimated to be twice as old. But at only 20 light-years from us, it's pretty close, for another star.

So what makes it so important? 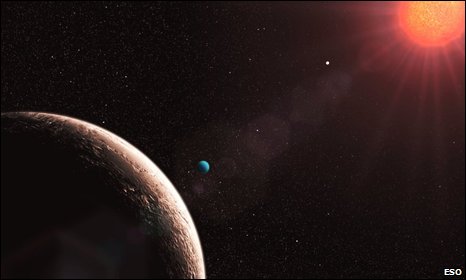 It's got at least four planets in its Solar System, including a new record holder: Gliese 581 e -- whose discovery was announced today -- weighs in at less than twice the mass of Earth!

Now, this planet that we found is very close in, just 3% of the distance to its star that the Earth is from the Sun, which makes it like an extreme version of Mercury.

But, planet Gliese 581 d looks like it is habitable, and rocky, just like Earth is. It's at the right distance from its star to get the right temperatures and conditions for life.

And remember, these four planets that we've found are -- probably -- just the four biggest ones. They are, respectively, 16, 7, 5, and 2 times the mass of Earth; the last three are expected to be rocky planets! Who knows how many lower-mass, Earth-sized planets are there, and where they might be located? I would keep an eye on this system if I were you, because it is the closest, best hope we have right now for life outside of our Solar System!

And with a minimum age of these planets of 7 billion years, you can bet that if life did form there, it's probably awfully interesting by now...

But when we do find an earth-mass planet in a habitable zone, we won't be able to do much meaningful observation of it, not with what we now have and have planned and funded.

We're really going to need some of those interferometers that they tantalized us with a few years back, then whose plans they shelved.

Well, the planets may be at least 7 million years old, but we don't know at what point in that time life formed (assuming it did). Life could be brand new there... but would that be more or less interesting?

I dare you to think up a plausible form of alien life that isn't awfully interesting. :P

So is the seti project monitoring this part of the sky?

Seti hasn't found anything yet, but I don't know if they've specifically searched at that particular star exhaustively.

I wonder -- could they have been transmitting and monitoring for signals for billions of years?

Wait! I think my TV has been receiving random parts of the Jackie Gliese Show starring a fat alien worm who yells "No-o-r-ton!" at a skinny grasshopper sidekick!

If it is that close to its dwarf star it would lead me to belive that any water source that may have existed would have boiled off long ago. So despite being in the goldilocks zone, I think its a long shot at being inhabitable unless we find a way to manufacture water once we get there.

Still a very exciting find. Amazing that we were able to locate one a mere 20 light years away. Keep searching!

All of you are forgetting one thing. There is no life on any other planet anywhere. The bible states that. And if you don't believe in god than im sorry you don't brlieve in peace and harmony after death.
Oh and im 13, yah and i have read the bible almost 4 times. Not in church but at home Not forced by my parents but by free will. I love god and he loves all of us too. So stop wasting all your money science people and just enjoy this world.

"And if you don’t believe in god than im sorry you don’t brlieve in peace and harmony after death."

So the Hindus don't believe in peace and harmony after death (the nirvana state after true enlightenment)? They have a cosmology that lasts about 4.5 billion years for each cycle and no god.

I think that if your god finds you misinterpreting his creation he will ensure you have no peace and harmony after death.

You are disgracing the effort he put into his work merely because you believe some tripe a hippie out of his head on weed wrote down.

Andronick- you're 13- go and do 13 year old stuff and leave the grown ups to talk.

The ignorance of religious beliefs no matter which religion has caused more conflict on this planet than anything else. Placing your faith in a magical man that "answers your prayers" at about the same rate that other people get what they desire. Does not prove that a mystical being exists.

Claiming that this being created all that we see does not mean that is what happened. When science has proven more than religion every wanted to think about and has made it possible for you to read that bible that was printed with chemical compounds and glued with chemical compounds, your closed mind just makes you and anyone as pious as you look foolish.

Open your mind and take a look at the world around you. We are about to go through an accelerated age of discovery and people like you will not be able to ignore it.

Have faith in yourself. God didn't give you the ability to read that book. You put the effort into learning, the human race has grown by using their own initiatives. Giving credit for your effort to an invisible being holds you back.

I hope there is life on these other planets and that it is intelligent enough to prove that some (not all) religious efforts on this planet are misguided.