In addition to the article I just wrote about the newly discovered planet in the Gliese system, Dynamics of Cats has a great writeup as well.

They also have a picture that I didn't include in my original post, and it's so good that I'm including it here: 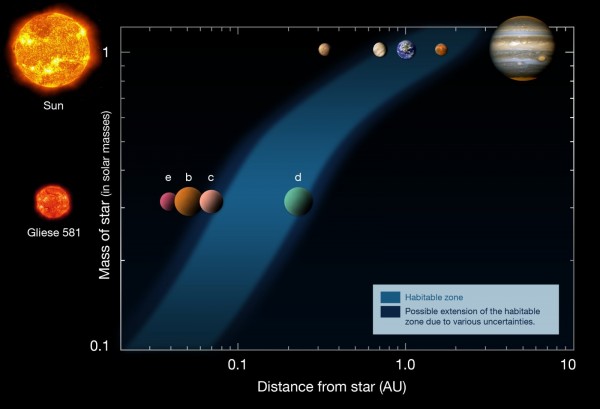 Who wants to bet that there's another rocky planet (or maybe more than one) in between planets c and d?

I like your writeup! But I think you're totally wrong about there being no room in the habitable zone. The eccentricity of c is only 0.16 and d is only 0.20, while their semimajor axes are 0.073 AU and 0.25 AU, respectively.

Which means the "zone" between about 0.073 AU and 0.24 AU is pretty much unaffected by those planets.

If another planet were there, don't you think it would have shown up in the spectra by now? I can see Gliese e not being found earlier due to glare from the sun, but a large planet between c and d would have hopefully been seen by now.

Could be a massive meteoroid belt there, though.

They haven't found these planets spectrally. They find them indirectly, by monitoring the parent star and -- from its motion and the laws of gravity -- they figure out where there are extra masses. But they're better at finding planets the closer they are to stars, and they're better at finding more massive planets. So there could be an Earth mass planet anywhere farther away than 0.02 AU from the Sun, and we wouldn't be able to detect it. Yet.

As a long time SF/ pop sci reader, the discovery of planets that remind us of home will have to wait for more sensitive instruments, I'm amazed that jupiter class planets have been found. There's still a possibility of a terrestrial moon orbiting one of the mega planets to look into. It's fun to see science fiction intrude on the mundane.

Yes. We find planets around other stars by *either* their light-blocking power (i.e., their size) or by their gravitational influence (i.e., a combination of their mass and their proximity to the star).

So it's no surprise that we haven't found anything Earth-like. Know why? Earth is about three-millionths the mass of our Sun and about 150 million km away. Yes, they're probably out there, and the fact that we're small and far away is why we haven't found them yet. Jupiters and Saturns are way easier to go after.