Yesterday, I showed you a picture of 100,000 nearby galaxies, which made me feel small, even when we just look at our (relatively) local Universe. Today, let's go down to the other end of the spectrum.

Electron microscopes have been around for a long time, and they've let us see some very advanced structures at amazingly high resolutions. For example, here are some individual pollen grains: 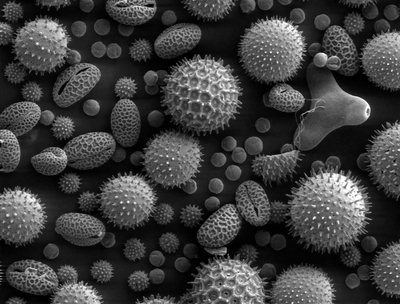 But what if you want to go deeper? What if you wanted, say, to see an individual protein and how it's folded? Well, we have the technology (such as at the Advanced Photon Source) to image and infer the structure of very large molecules. (See below.) 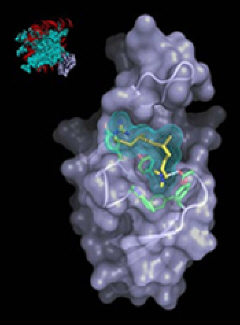 But -- and I've gotten this from BBC news -- scientists have, for the first time, directly imaged an individual, simple molecule. The molecule they went to work on is known as pentacene, which looks like five benzene rings all bonded together.

Well, if you want to see things this tiny, the earlier technologies -- electron microscopes and high-energy photons -- won't give you high enough resolution without also destroying the molecule you're trying to see. What can we do?

There's a special type of microscope known as an Atomic Force Microscope (AFM). Basically, you make a tiny, sharp, atomic needle that you move over the top of a molecule. When you approach different atoms in a molecule, the electric forces either attract or repel the needle. As the needle moves up and down, the handle that it's attached to feels forces and torque. So, all you have to do is measure these tiny changes in force and torque, and you can image the molecule beneath it. 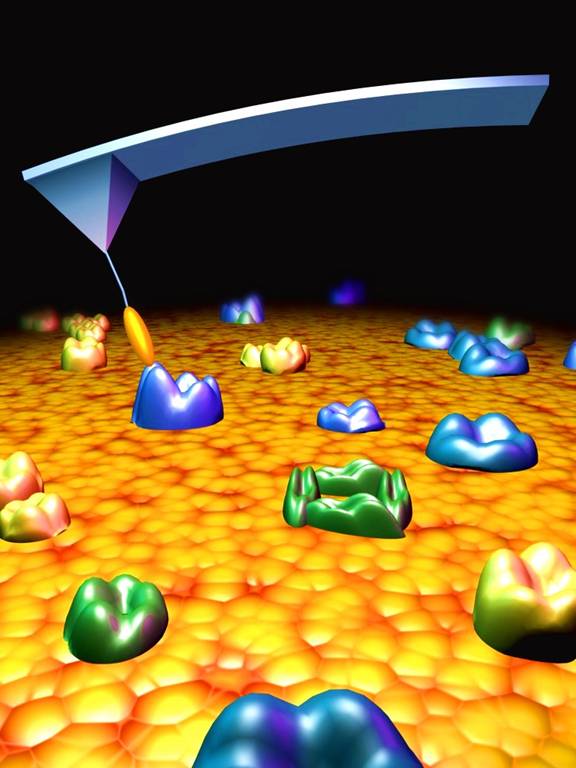 Well, a team from IBM Research Zurich managed to do something brilliant to an AFM tip. They used it to pick up a carbon monoxide molecule, which is just a carbon atom and an oxygen atom bonded together. This meant that the new tip -- the carbon monoxide molecule attached to the original AFM tip -- was just two atoms across, the highest resolution tip ever invented. They then ran this over the top of the pentacene molecule. Take a look at what they saw:

Wow. You can even see that the electrons like to live on the outside edges of the carbon rings, and that there are fourteen tiny hydrogen atoms bonded to the carbon atoms at various points. What an amazing picture; the entire molecule is only 1.4 nanometers across! Thanks to Greg Laden for this find. I've got nothing more about molecules, but if you want to see Conan O'Brien's "Moleculo" skit from 2001, I've found that for you. And have a great weekend!

i knew that was a pic of pollen immediately because my nose started to tingle.

Field ion microscopy can image some pretty small things too.

I think the protein "image" you have is a composite of multiple molecules put together by imputing the average electron density from a diffraction pattern of a crystal. If that is an "image", then Robert is correct and nuclei have been "imaged".

For some reason, newspapers and bloggers seem to hate to give the literature reference, but the original paper is the only place to find out what the scientists actually did and what the data actually looks like.

Wow, I used to think that this was cool (which it is):
http://image.gsfc.nasa.gov/poetry/activity/act701.html
but technology sure has improved.

Indeed. Crysttallography is awesome, but it only works on ensembles - crystalline ones at that. And what is imaged is electron density. Though one can work with neutrons to get to the nuclei instead.

What I meant to say is that we already knew what pentacene looks like before this AFM picture was published because it's a well-studied molecule. It doesn't matter if our knowledge comes from ensembles, we take the sum total of all available data from many kinds of experiments and use that to form some sort of mental image of what an individual molecule might look like if we could see something that small.

The authors of the AFM paper are merely claiming that they have determined the chemical structure of pentacene. That's it. They aren't claiming to have measured bond lengths, and you can see from the image above that the relative C-C bond lengths are wrong compared to what we know about pentacene.

What they accomplished was an extraordinary technical feat. Just the idea of picking up a molecule of CO is amazing in itself. They positioned the CO with precision that is hard to comprehend, perpendicular to and close enough to the molecule to sense repulsion but not close enough to disturb it. And then they quantified the repulsion. It's great work, and it adds something to our knowledge, but the picture contains little new information. A traditional ball and stick model depicts the atomic positions more accurately and it is no less amazing than the blurry image with strange shadows and bright highlights.

i knew that was a pic of pollen immediately because my nose started to tingle.

For some reason I mistakenly thought they were diatoms, then I sneezed ... now I know. ;-)

"imaging" is an interesting science.

These images are just as valid as those pictures of galaxies taken by Hubble. A 'sensor' picks up a stimulus and an algorithm transforms that stimulus into a raster scan of pixels, colorized or in shades of gray, and the eye picks up the light reflecting off that raster scan, breaks it up into pieces and sends it all over the brain, some portions having chemical reactions to intensity, some to contrast, some to color, and then something really wonderful happens. That which we identify as our "selves" integrates all that stimulus and from it, perceives an "image".

What an awesome photograph of a molecule. It is what it is.

This may have some future implications in forensic science... such as analyzing gun shot residue (GSR) particles! What do you think?

I was going to write an article about SEM-EDX on my blog, can I put your article as a further reading after the post? (Email me if it's OK)

(My blog: http://interinfor.wordpress.com/ is called Interdisciplinary Science... let me know what you think!)

Links to my blog and copying excerpts -- so long as credit is given -- is always allowed. I'm glad you are as impressed with the image and the technique as I am!

Just another fascinating picture. Thanx Ethan. Does it need to be anything more???

I really like when Ethan posts material about chemistry, not only is it my field of study but I get a chance to bust his chops about it at the same time.

1. Individual simple molecules have been imaged routinely using scanning tunneling electon microscopy. See the work of Nobel winner Gerhard Ertl for example. Images of CO and other diatomic as well as larger molecules are imaged using this technique.

2. The transmission electon microscopy techniques have been used to image small molecules without significantly damaging them. See the work of many of the those pioneering this work:

The trick is to use some kind of protective support, low accelerating voltages, and shorter beam exposure times.

The real break through here is in the AFM's ability not only to visualize the atoms, but also the bonds present in the molecule. The technique still suffers the drawbacks of other scanning probe techniques, in that the atoms can not be easily identified chemically, i.e. what element is being probed.

An incredible image. Thanks for sharing!

Just thought I would let you know, you can't actually tell anything about the electrons in the penticene molecule. Electrons are waves at the point and impossible to be seen. But good post, douche.

They look so creepy..you can't imagine that they just pollen grains.

Ethan,
What is the tattoo on your cheek?
Also, is that a SERPENT around your right arm?
What does the serpent signify?

What is the costume you're wearing?

This is very coooooooooool!!!!!!
Oh my god it just struck me!!!!
What fun would have it been if I had one of these Electron Microscope!!!!!
Damn its soooo coooooooooool!!!!
I love it!!!!!
FANTASTIC MAN KEEP IT UP AND GO ON POSTING THESE STUFFFS!!!