What we know about Pluto today could fit on the back of a postage stamp. -Colleen Hartman

Part of the joy of astronomy is, every once in a while, you just get an astoundingly beautiful new picture or video of a foreign planet, star, galaxy or cluster. Pluto, the most distant planet, is among the most elusive. 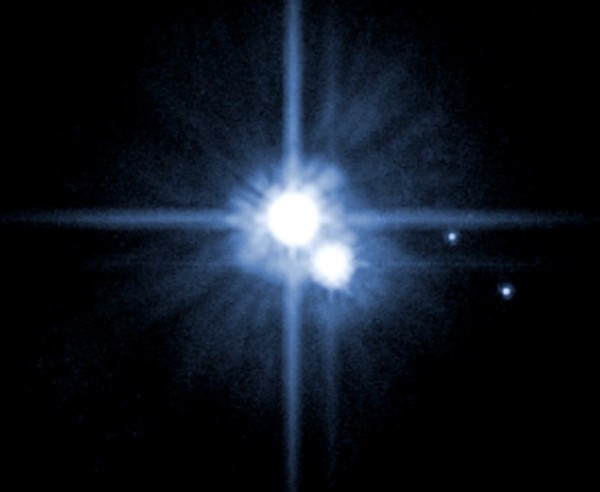 This picture above was snapped by the Hubble Space Telescope about a decade ago, and shows us Pluto (center) with its large moon Charon and its two smaller moons, Nix and Hydra.

It's pretty difficult to get better resolution pictures of that planet because Pluto is both so far away and so tiny. There was an attempt to image surface details on Pluto back in 1996 using Hubble, and the results were only marginal. 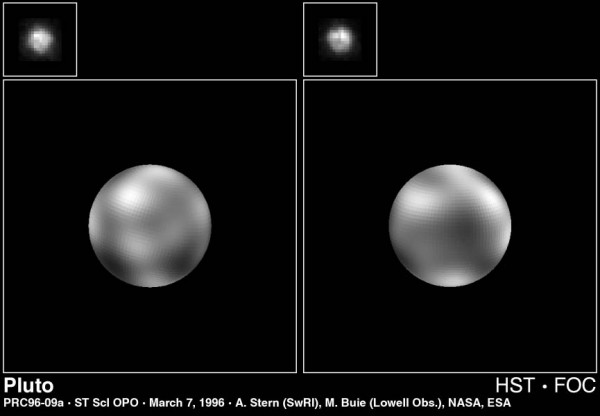 I'm always disappointed when I have to show an artist's rendition, though, so I was reluctant to even try. I just found out today that new pictures were released, and so I was licking my lips in anticipation. 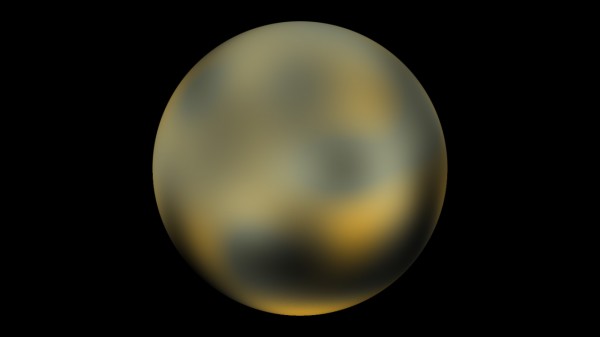 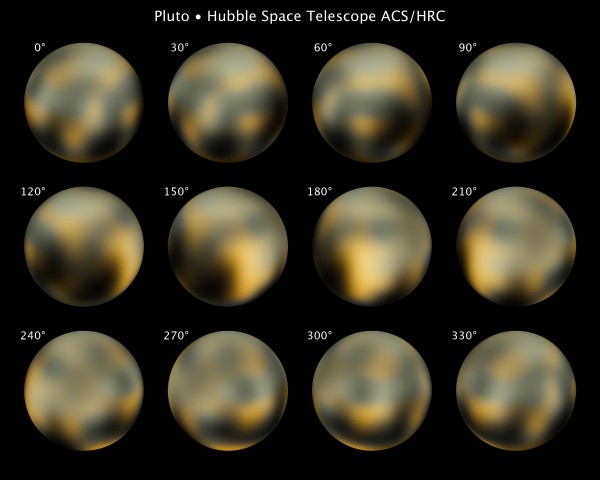 But the most spectacular thing I've been able to find about this? A high-resolution video of Pluto rotating, made from a whole slew of images stitched together digitally. Want to see what Pluto looks like as it spins? Just watch.

Want to watch the super hi-res version? Click here. Yes, Pluto, you're not a planet anymore, but don't think for a minute that we all aren't still awed by you. I have no idea what that giant frozen-looking feature is, but I'm sure there will be scientific papers out on it in the near future! Thanks for sharing just a bit of your secrets!
Tags
Astronomy
Hubble
Solar System

"We really expect the mission to be transformational. This is the capstone of the original visits to the planets. It takes us 4 billion miles away and 4 billion years back in time." -Alan Stern When the Hubble Space Telescope discovered additional moons of Pluto, beyond Charon, it was speculated…

Are We Trading Away the Education of Future Astronomers?

"Just as I did some 25 years ago, my graduate student is right now using one of the NOAO telescopes, learning how to do observational astronomy... Closing down one of these observatories in the next few years would likely lead to long term problems with producing adequately prepared astronomers in…

Herschel, First Light, and why it matters

First light is one of the most important tests of any new telescope. It allows you to look at a well-known object, see if there are any problems with your telescope, and to get a small glimpse of how good your telescope is going to be. Almost 20 years ago, we launched the Hubble Space Telescope.…

Guess what: The 1994 pictures from the old FOC were drastically sharper than the new images from the ACS - this also the reason it took almost a decade to process the later into maps of comparable resolution. The new "images" and "movie" are mere artificial Plutos generated from that map.

That feature you are asking about is the massive base where the Epsiloni invasion fleet is based.

Nice Pluto action, Ethan. Hopefully there will be privately funded ventures to get another camera out there in the future. We could do it ourselves if we all pitch in! I've got about 12 dollars... anyone else?

Clearly Colleen got my letter. I'm glad she remembered to look on the back of the stamp. I ran out of room on the letter itself, babbling about Hubble....

Did I miss something? I know we've got Kepler and an upgraded Hubble, but what's coming in 2015? Besides a manned space mission from the VSSC...

Unless you've built a rocket in your backyard? YOU SLY DOG, YOU! :)

Oooh, shiney! I hope it's got enough power to capture Kuiper Belt objects.

Aw come on, Tim. If you are going to link to New Horizons at least link to the official mission website. ;-)

Do you remember? We named it after a Disney dog that doesn't walk on two feet or wear clothes.

I don't understand what I'm looking at in the Pluto pictures. What does the orange indicate on the figure? Does it indicate temperature, height, or chemical composition, or something of the like?

We named it after a Disney dog that doesn't walk on two feet or wear clothes.

That's a pretty good trick, considering that Pluto wasn't named until 1931 and the dwarf planet Pluto was named in 1930.

Any time I think of Pluto I am still beguiled by how the IAU came up with a planet definition (2006)which - let's be honest - is purely cultural.

Hence a bit of tongue-in-cheek.

Durrr. They had insider information from Disney studios. These things aren't cooked up over night.

I want a version I can rotate by hand - I'm almost sure the dark splotches form a big frowny face :-( . That would certainly explain the supposed rapid change of the appearance - it used to be a smiley before 2006.

silly question, but if hubble can see so clearly so far into space why can't it get a better image of something so relatively close?

@DHomstad: "What does the orange indicate on the figure? Does it indicate temperature, height, or chemical composition, or something of the like?"

It pretty much indicates "orange"--the map intends to describe true visual color, seen as if one were much closer. Brightness corresponds to reflectivity (albedo).

Highlands and lowlands is what I'm thinking.

That, and the fact Pluto-Charon is a double world with two moons. Maybe we could call this double world Pluto, with the larger partner being named Charon and the smaller partner Styx.

Did I miss something? I know we've got Kepler and an upgraded Hubble, but what's coming in 2015? Besides a manned space mission from the VSSC...

Unless you've built a rocket in your backyard? silly question, but if hubble can see so clearly so far into space why can't it get a better image of something so relatively close? I don't understand what I'm looking at in the Pluto pictures. What does the orange indicate on the figure?